THE FOUR SKULLS OF JONATHAN DRAKE (1959) 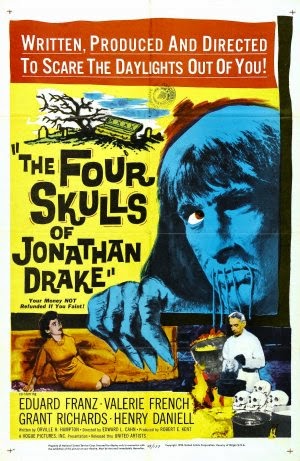 
Although Edward L. Cahn's 1962 film BEAUTY AND THE BEAST  was his last metaphenomenal film. it was very atypical of his 1950s work, and I even argued in the above essay that BEAUTY was probably more of a writer-driven project. 1959's FOUR SKULLS OF JONATHAN DRAKE is far more typical of Cahn's 1950s work. Like ZOMBIES OF MORA-TAU,  INVISIBLE INVADERS, and CREATURE WITH THE ATOM BRAIN, SKULLS is about the horror of the undead returning to persecute the living. However, SKULLS may be the only Cahn to be predicated on post-imperialist politics.

For over a hundred years the patriarchs of the Drake family have died under mysterious circumstances, though they are always old enough that the deaths can be dismissed as "natural causes." The current generation of the Drake family is represented by Kenneth Drake, his brother Jonathan, and the latter's daughter Alison. Kenneth dies at the film's opening. An investigating cop, Jeff Rowan, finds a few unusual aspects to the case, like the fact that someone leaves a shrunken head, as created by the Jivaro Indians, at the home of the late Kenneth Drake. Both Drake's brother and his colleague Doctor Zurich inform the officer that there's a rumored family curse on the Drake family. The scenario is a little vague, but it seems that at some time in the 1800s, a tribe of Jivaro Indians took a white prisoner and cut off his head. No reason for the tribe's action is given, but a Drake was responsible for a retaliatory expedition against the Jivaros, allegedly wiping out all members of the tribe except its witch-doctor. The witch-doctor, alleged to be immortal, is thought to be the source of the curse, which divests each of its victims of his head.

Though Rowan doesn't for a minute credence the idea of an immortal witch-doctor, SKULLS' running-time is too short to play around with "is-he-real-or-not" games. Early on the audience sees not only the witch-doctor Zutai-- whose lips are sewn together with thread to show that he does not need to eat or breathe-- but also that he's being helped in his head-hunting endeavors by the devious Doctor Zurich. Zurich's one-sided conversations with Zutai don't reveal his motives for doing so, and the reason for this reticence is that said motivation leads to the film's one unexpected mystery-solving pay-off.

Though Zutai makes a creepy-- if not precisely scary-- figure, SKULLS' plot doesn't do much to take advantage of his menace. As with ZOMBIES OF MORA-TAU, this film's stock characters don't offer the audience much of a reason to become invested in them. A modern audience would probably find it unacceptable that the Drakes are so blase about their ancestor's involvement in the slaughter of an entire tribe. Unlike Marxist critics, I'm not all about looking for imperialists under every rock, but it does say something about the filmmakers' world-view that the ethics of massive retaliation didn't even occur to any of the characters. The aforementioned solution to the mystery of Zurich's involvement might be fairly deemed a "demonization" of the real-life Indian tribe, though that demonization takes such an absurd form that I prefer to see it as expressing the ambivalences of the filmmakers, and potentially of their audience, toward the intersection of the modern and the primitive.

The journey to reaching that pay-off is fairly tedious, as policeman Jeff slowly comes around to believing in the supernatural, and ends up fighting with both Zutai and Zurich. Cahn's direction of the climactic confrontation is unremarkable, with the immortal Zutai being defeated far too easily. The big reveal is that Zurich is literally a "man of two worlds," for he was the white man who was beheaded over a hundred years ago. However, only his head still exists in a state of "living death," for it was attached by Zutai to the body of a Jivaro Indian, also presumably dead before Zutai brought this South American Frankenstein back to life.

Since Zutai never speaks, one can only conjecture as to his motives. Even before the destruction of his tribe-- for which he might deemed partly culpable-- did he have it in his mind to perform this wild "head transplant?" Did he want to create the ultimate "undercover agent," a creature who could pass as "white" even though the greater part of him was "red?" How did Zurich conceal the Jivaro flesh of his hands from day to day, and was it really his mind in that skull any more, or did Zutai somehow transfer the soul of the Jivaro into the hybrid body? The script makes much of the witch-doctor's belief that the victim's head must not be damaged, lest the soul escape; for that reason he preserves the skulls of the Drake victims, apparently just for the satisfaction of one-upping the family of his enemy, or perhaps Caucasians generally. A psuedo-scientific reason is advanced for Zutai's immortality, but the idea that he's simply filled with curare fluid is just Cahn's version of the "tana leaves" of the Universal "Mummy" films. But whether souls really exist or not is left up to the audience's speculations.

SKULLS is nowhere near the best of Cahn's metaphenomenal outings-- that would be both THE SHE CREATURE and CURSE OF THE FACELESS MAN. But at least SKULLS has more potential for high-level mythicity than most of his other undead-films, even if it doesn't deliver on its promise.

Posted by Gene Phillips at 3:22 PM
Email ThisBlogThis!Share to TwitterShare to FacebookShare to Pinterest
Labels: the marvelous