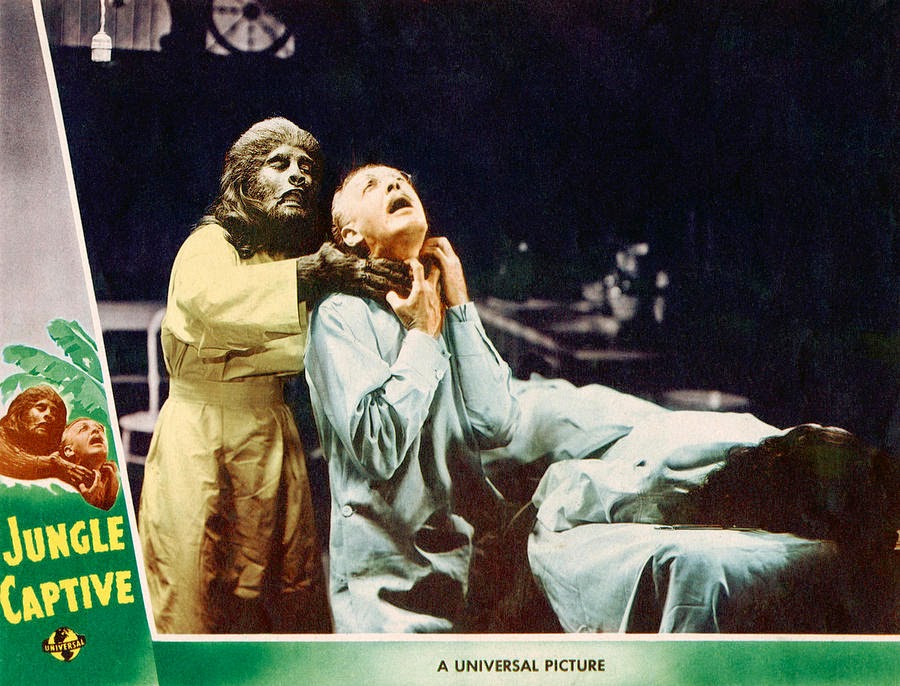 
I managed to get a fair amount of mileage out of the first two chapters of Universal's Ape Woman series, respectively in CAPTIVE WILD WOMAN and JUNGLE WOMAN. But my review for the last in the series, JUNGLE CAPTIVE, will be one of my shortest, because there's just not that much one can say about this phoned-in entry.

Once again, Paula's corpse is exhumed by a scientific researcher with ideas about using it for some project that may benefit humanity in future, even if he has to kill a few people to get there. In contrast to the previous film, though, mad scientist Stendahl doesn't manage to get Paula Dupree on her feet to menace handsome swains. Once he's brought Paula back to life, she doesn't have much strength, though she does get up and wander the grounds a few times before being brought back. Finally he decides to revert her to ape-hood, which, as shown above, results in the researcher's own demise.

With a monster-star who's so conspicuously sidelined, CAPTIVE can only attempt menace by giving the mad doctor a stooge to commit his murders. This job falls to Rondo Hatton, strangely given the name of the Semitic god Moloch, usually associated with child-sacrifice. Moloch's character type is basically lifted from DRACULA's Renfield, in that he falls in love with the film's leading lady, and turns on Stendahl when the doctor menaces her. Just like Renfield, he's killed by Stendahl not longer before his evil leader himself buys it.

Harold Young's direction is competent but so uninspired that even Reginald LeBorg-- not exactly known for being a kinetic director-- looks good by comparison. Aside from Hatton, there's a little fun to be had in spotting other character-actors like Ottor Kruger, Jerome Cowan and Eddie Acuff. Oh, and while JUNGLE WOMAN went out its way to rewrite everything in CAPTIVE WILD WOMAN, JUNGLE CAPTIVE returns the favor by going back to the original "Doctor Walters" scenario and ignoring almost everything in the middle film. What goes around, and all that.
Posted by Gene Phillips at 3:14 PM
Email ThisBlogThis!Share to TwitterShare to FacebookShare to Pinterest
Labels: the marvelous