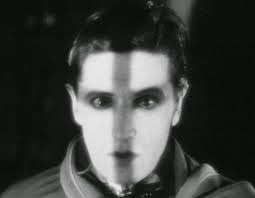 In one of my theoretical essays for THE ARCHETYPAL ARCHIVE, I commented on this 1927 film in this fashion:

[THE LODGER] departs from its source by renaming the serial killer "the Avenger." Further, though Hitchcock had wanted to keep some ambivalence as to the guilt or innocence of the man suspected of being the killer, he was overruled, with the result that the accused man is proved innocent and the real killer, though his capture is mentioned, is never seen on-screen.  Without question Hitchcock introduces visual motifs to suggest the dread associated with a serial-killer boogieman, but one may argue that these are overpowered by the film's naturalistic focus.


I hadn't screened Alfred Hitchcock's THE LODGER for some time when I made that assessment, but I'm pleased to see that my recent re-screening of the Premiere Collection's DVD bears out my initial impression of the film.

THE LODGER was Hitchcock's third film as director, after having served in other capacities for some years. It was also his first substantial success, and set the creative pattern that would later cause him to be labeled "the master of suspense." Through no fault of his own, he also became erroneously associated with horror, possibly because his teleseries ALFRED HITCHCOCK PRESENTS dabbled in that genre. This association may have encouraged Hitchcock to experiment more substantially in his cinematic masterpieces of the early 1960s, PSYCHO and THE BIRDS; at the very least, Hitchcock is said to have considered Bloch's PSYCHO for an episode of his teleseries. But most of the stories in that series follow the pattern set by THE LODGER, focusing on naturalistic fear, mystery and suspense rather than the dread and terror that characterize most if not all horror films.

My viewing of the DVD extras has supplied me with a few refinements of my above statement. The original novel on which THE LODGER was based explored an "urban myth" that Jack the Ripper had taken lodging in a certain boarding house before escaping the police once more-- a house in an area of London not far from one of young Alfred Hitchcock's places of residence. Hitchcock did ring in a number of personal changes on the Marie Belloc Lowndes novel-- not least by having the serial killer seek out only blonde victims-- but the director did want to keep the basic premise of the novel intact: that the strange "lodger" was most probably an escaped murderer. The film's producers, however, did not want the chosen actor Ivor Novello to alienate his female fandom by portraying a serial killer. Thus the lodger, first seen as a slightly forbidding figure when he arrives at the boarding house, quickly becomes more normal-looking as he begins to form a romantic affiliation with Daisy, daughter of the couple who maintain the boarding-house. Still, the serial killer-- given the name "the Avenger" to distance him from the historical Ripper-- continues to prey on blonde women. So every time the lodger is alone with Daisy, even Novello's fans had to wonder if he might suddenly turn upon her.

Nevertheless, Hitchcock repeatedly emphasizes the persecution the lodger endures--note the image of the cross superimposed on his face in the still above. The main source of this persecution is the character Joe, a local detective who yearns after Daisy but has scarcely managed to captivate the girl, even before the lodger's arrival. Thus THE LODGER introduces two major tropes in the work of the director: the persecuted male victim (SABOTAGE, THE 39 STEPS, THE WRONG MAN) and the usually bungling or even malicious constabulary (FRENZY being one of the few exceptions to the rule, although the detective who saves the film's innocent victim doesn't do so until the latter has already gone to jail for murder).

Thus even though the crimes of the Avenger create the atmosphere for the film's near-tragedy, the Avenger himself is barely a presence in the film: one knows him only through the screams of his victims and his peculiar calling-cards (what he is "avenging" by his murders remains an unanswered question even after he is captured). In a sense the true "Avenger" is the mob that becomes incited against the lodger by Detective Joe's misreading of the evidence: I noted a similar trope in 1951's SON OF DR. JEKYLL, where I commented that "the crowd terrorized by the monster becomes a monster in its own right. "Only an eleventh-hour rescue allows the lodger to be happily united with Daisy at the fade-out.

THE LODGER isn't a favorite of mine. Its moments of suspense are just fair, and the comic relief of the couple who run the boarding-house isn't especially funny. It's best seen as an early experiment, with Hitchcock solidifying some of his favorite tropes and techniques for the future masterworks to come.

Posted by Gene Phillips at 3:28 PM
Email ThisBlogThis!Share to TwitterShare to FacebookShare to Pinterest
Labels: perilous psychos (n), the naturalistic