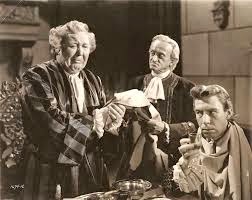 
In 1948 Universal essentially "exorcised" its own reputation for horror-franchises by subjecting its most famous monsters to Abbott and Costello. And for the next three years, Abbott and Costello films were the only outlets for Universal horror. Then in 1951 and 1952, Universal made two period-dramas with horror elements. The films's main appeal seems to be oriented toward the swashbucklers of the decade, which unlike horror films were reasonably popular across the board. Both films were the first metaphenomenal films for their respective directors, though only one of the two became famous for his output in that department.

I have not read the Robert Louis Stevenson story on which THE STRANGE DOOR is based, though some reviews state that the film has ratcheted up the torture elements. But DOOR is unquestionably the stronger of the two films. The title refers to a concealed door in the castle of the Sire de Maletroit, an eighteenth-century nobleman who maintains a medieval attitude toward torture-devices. He also keeps his own brother Edmond confined in a dungeon, while creating the fiction that he is dead. He does this because he wanted the woman his brother married, and so comes up with a complicated plan of revenge. Maletroit has raised Edmond's daughter Blanche-- who looks exactly like her deceased mother-- to adulthood, but has done so so that he may despoil her in marriage. However, Maletroit doubtless knows that society would not approve of an uncle marrying his own niece, so he tries to blackmail a young wastrel, Denis de Beaulieu, to do his dirty work for him. However, Denis and Blanche fall in love, which means that the evil nobleman must come up with a new plan.

Boris Karloff has a supporting role as Voltan, a servant who is still loyal to Edmond, but the role is very underwritten despite the character's importance to the plot. Even one of Maletroit's lackeys, Talon (Michael Pate), gets better characterization. Richard Wyler does nicely as the young swain reformed by love, but this is entirely a Charles Laughton vehicle. And while Laughton does use some of his favorite acting-tricks-- lounging on a table a la Doctor Moreau-- he invests the villain with a great deal of humanity, particularly toward the end, when Maletroit realizes some of the folly of his actions.

Director Joseph Pevney brings a sort of low-budget flair to the proceedings, but did not return to metaphenomenal subject matter until he started directing for television shows like THE MUNSTERS and STAR TREK. 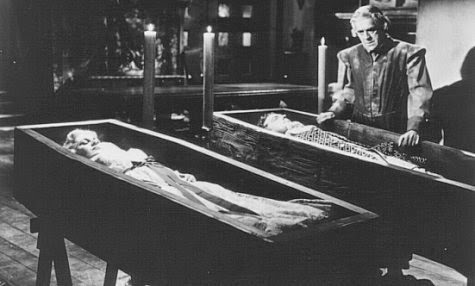 In contrast, director Nathan Juran became quite well known for his 1950s fantasy-works, particularly THE SEVENTH VOYAGE OF SINBAD, as did his producer on THE BLACK CASTLE, William Alland. Yet they seemed out of their depth in these mordant Gothic settings, and the script, though written by the same fellow who adapted Stevenson, lacked the psychological tension seen in STRANGE DOOR.

This time, a British agent named Burton is sent to Austria to investigate the doings of Count Von Bruno, with whom Burton contended in colonial Africa. The implication is that Von Bruno practiced some atrocities on the natives, in contrast to the more enlightened British regime, making this somewhat in the territory of Conrad's HEART OF DARKNESS. The backstory, however, is only an excuse to motivate Von Bruno in acts of revenge against certain British officers who fought against in Africa. Burton, who never met Von Bruno personally, mounts an investigation of the missing officers. While Von Bruno tries to find ways to discreetly murder the young officer, his young wife Elga begins to show a strong interest in Burton.

Richard Greene, playing Burton, attempted to bring to this role some of the swashbuckling brio he put across in his ROBIN HOOD teleseries, but the character is bland. A more melodramatic actor than Stephen McNally might have saved CASTLE, but McNally lacks the needed intensity, while horror-stalwarts Karloff and Lon Chaney Jr. are sidelined in supporting roles. There's a fair amount of action, and a Romeo-and-Juliet schtick where Burton and Elga fakes their deaths with drugs that slow their reactions. But CASTLE proved unviting to audiences, and there were no more in this "series."
Posted by Gene Phillips at 3:47 PM
Email ThisBlogThis!Share to TwitterShare to FacebookShare to Pinterest
Labels: bizarre crimes and crimefighting (u), the uncanny