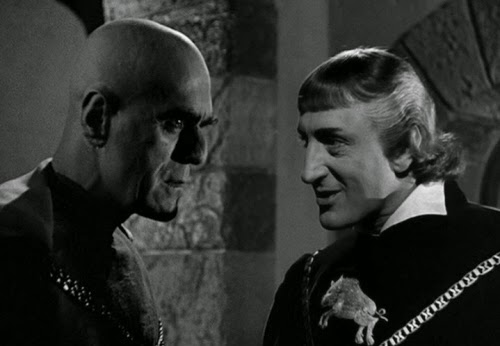 
I mentioned the Rowland V. Lee TOWER OF LONDON while reviewing Roger Corman's same-name film, noting in passing that the Lee-directed work benefited from a more rounded cast of characters. I didn't remember for certain that Lee's version of Richard III didn't see ghosts of his murdered victims, as did the versions depicted by Shakespeare and Corman, and indeed, Lee's historical-drama-with-horrific-touches is firmly naturalistic in every way.

But though I enjoyed many of the character touches of the 1939 TOWER OF LONDON, it' doesn't always manage its many characters all that well, TOWER's script isn't directly based on the Bard's RICHARD III, but it could have used some of Shakespeare's ability to imbue even minor characters with distinct emotional attitudes. Far too many incidental "royal" characters are flung at the audience, and Lee doesn't manage to clarify the political situation in the days of Plantagenet England. Sadly, like many Universal films, the emotional core of "what's at stake" is concentrated upon the fate of two dewy-eyed young lovers, neither of whom sustained my interest.

With so many ill-defined "good" characters swarming about, the audience can't help but be most interested in the villains, Basil Rathbone's Richard III and Boris Karloff's fictional "Mord the Executioner," both of whom manifest the trope of "freakish flesh" in its naturalistic manifestation. As if to explain the alliance of this unholy duo, Richard's famed hunchback is given its mirror in his henchman's club-foot. Mord does all of Richard's dirty work within the torture chambers of the titular tower, and even maintains a curious "beggars' army" that he can use to spread rumors that work to Richard's advantage. Strangely, though Rathbone got better scenes than Karloff when the two actors collaborated that same year with Lee on SON OF FRANKENSTEIN, Lee's script gives both actors good scenes. Yet Rathbone, perhaps because he's made to play the usurper as both an insidious schemer and a courageous fighter, doesn't succeed in giving audiences a memorable Richard. Karloff's Mord, however, steals every scene he's in, playing a character who seems as if he's brutalized his own potential humanity through his acts of brutality-- which, in a roundabout way, would seem to be in tune with the moral of Shakespeare's play. 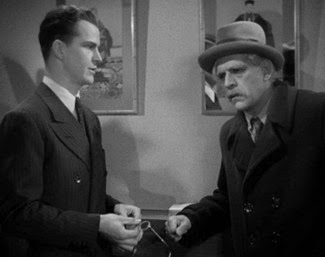 NIGHT KEY by comparison is very small beer indeed, Some Karloff fans have enjoyed him best when he played basically benevolent men who overreach themselves, as he did in THE APE. For my money, though, these are some of Karloff's most monotonous performances, and David Mallory of NIGHT KEY may be a low point here.

Karloff plays David Mallory, an electronics expert with a grown daughter, Jean. They live a low-income existence because fifteen years ago Mallory's last great discovery, a complex "electric eye" alarm system, was taken over by his business partner. the oddly-named Steven Ranger, in such a way that Mallory got nothing. Mallory then spent the ensuing time trying to devise an even more improved alarm-system, in the hope of lifting himself and Jean out of penury. We also later learn that Mallory and Ranger were once competitors for a woman, and that this woman became the mother of Jean, meaning that Mallory won that contest. So, given these two points of contention between Mallory and Ranger, you wouldn't think that the scientist, worried about his failing eyesight, would seek out Ranger to exploit his new alarm-system.

Yet, even with the advice of a lawyer, Mallory gets swindled again. Ranger buys the new system so that he can keep Mallory from marketing it elsewhere, perhaps in part because of his old grudge about Jean's mother-- though he never admits as much.  Mallory tries to reason with Ranger, but apparently Mallory's lawyer didn't read the contract very well. Mallory warns his old partner that he can "destroy what he created."

Just as Ranger prepares a big press event to celebrate his current alarm-system, Mallory uses a sort of "override mechanism" to short-circuit the alarm. He also frees a petty crook, name of Petty Louie, from incarceration, but does so only to embarrass Ranger. After ruining the demonstration, Mallory then uses the override device to infiltrate businesses with the system, not stealing anything but leaving behind mocking notes. Petty Louie goes along with him, providing the film with some much-needed humor when he tries to swipe things, much like the proverbial kid in the candy store.

The cops go looking for Mallory, and so does a security officer who works for Ranger, one Travers. Travers courts Mallory's daughter Jean and tries to arrange a deal for Ranger to give Mallory immunity from prosecution if the scientist will stop messing around. However, hard-core crooks get wind of Mallory's override device-- the "night key" of the title-- and capture both Mallory and Petty Louie, in order to force the scientist to open the vaults of the city to them.

The romantic subplot is not much more interesting than Karloff's befuddled scientist routine, and the crime story distracts from the nastiness of Steven Ranger, who seems a worse menace insofar as he commits "crimes" under the aegis of "good business."  I realize that a feature that's barely over an hour can't adequately comment on the evils of capitalism. I just find it more satisfying when the cheating capitalists are knocked off by mad scientists, rather than publicly chastised.

Aside from the comic moments of Hobart Cavanaugh's goofy crook, NIGHT KEY is mostly interesting for showing the status of electronics in the days before integrated circuits, much less microchips. Yet what Mallory's invention does is functionally indistinguishable from the modern "computer override," so I regard it as an "uncanny" device rather than a "marvelous" one. In John Stanley's CREATURE FEATURES the author incorrectly claims that Mallory uses a "death ray" against his crook-captors, but it's just a big showy electrical discharge, not a ray of any kind.

Posted by Gene Phillips at 3:03 PM
Email ThisBlogThis!Share to TwitterShare to FacebookShare to Pinterest
Labels: bizarre crimes and crimefighting (n), diabolical devices (u), freakish flesh (n), the naturalistic, the uncanny