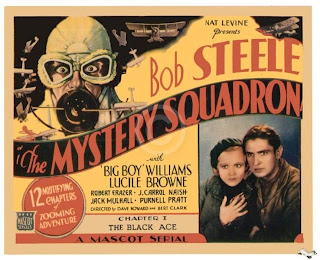 Here we have two aviation-oriented serials, separated by ten years, but they have in common only one metaphenomenal element: a masked mystery villain.

Daredevil pilot Fred Cromwell and his pilot-buddy (and comic relief) Bill Horn are contacted for a suitably challenging job. Stephen Gray, contractor for a new dam, finds his project under constant aerial attack by a cadre of criminal pilots dressed in matching uniforms. They call themselves the Mystery Squadron, and their masked leader, "the Black Ace," continually warns the construction company to pick up stakes and leave the project.

The mystery elements of SQUADRON are minor at best; the film presents several red-herring candidates, and does so without being overly misleading or contrived. Still, the Squadron's motives for trying to drive off the construction company are dubious, and none of the suspects are particularly engrossing, though they include the popular character-actor J. Carroll Naish. Still, I noted that this Mascot serial seemed unusually adept at casting actors who look rugged and down-to-earth, in contrast to many serials that make their characters look overly handsome.

The heroic pilots Cromwell (Bob Steele) and Horn (Guinn "Big Boy" Williams) are no exception to this rule: although they're flat as characters, the script gives them some good badinage, particularly with reference to Horn's comical affection for jelly beans. Most serials overplay their humorous elements until they become predictable and thus unfunny, but SQUADRON is at least palatable in this respect.

Of course, such a serial is mainly about the action, and SQUADRON provides some good if not exceptional sequences. The Black Ace isn't on camera very often, and his costume design-- seen in the above lobby card-- is unimpressive. However, since all of the other crooked pilots tool around in light-colored uniforms-- possibly silver, though it's impossible to tell with a black-and-white serial-- they have a visual effect rather like that of a crooked Blackhawks.

The Black Ace also sports a few uncanny devices, such as a flamethrower mounted on his plane, and a few flash-grenades that he uses to blind his adversaries when he's cornered. 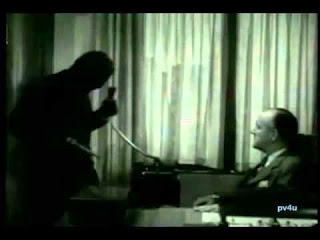 In contrast, the only metaphenomenal element in ADVENTURES OF THE FLYING CADETS is its single masked villain, who has no special devices and no explanation for his peculiar name, "the Black Hangman." Since he goes around trying to knock all the members of an expedition to North Africa, perhaps the scripters were thinking of the game "Hangman?"

The heroes this time out are four former street kids who are receiving flight-training to prepare for them for possible acceptance to the Air Force. Perhaps the implied rationale for this program was to fast-track juveniles for service in the armed forces, given that America's involvement in WWII was at its height in 1943, but no detailed explanations of the program are given, nor do the four boys-- Danny, Scrapper, Jinx and Zombie-- make more than cursory reference to their urban experiences.
They become involved in tracking down the Hangman after he kills their mentor, a retired U.S. Army officer. Though the Hangman has allies in the German spy-network, he himself is motivated only by a profit. He wants all the persons who visited the African caves of An-Kar-Han dead, so that only he can make the caves' stores of natural helium available to the Nazis, and thus reap a great monetary reward. It's not clear to me as to why the other expedition-members didn't immediately reveal this significant strategic information to the American high command, and none of them seem to have any suspicion as to the reason they're being targeted.

The four juvenile leads are competent in their adventurous derring-do, though not distinct enough to give any competition to the Dead End Kids (or their various derivations).  As is often the case with kid-gangs, the character used for comic relief gets the best lines, as when "Zombie" (William Benedict of CAPTAIN MARVEL fame) tells his buddies that he's stolen them some fresh clothes off some "good Nazis"-- by which he means "dead ones."

CADETS is an OK serial with good production values, but no particularly imaginative scenes or characters that would raise it above the level of the average.
Posted by Gene Phillips at 3:58 PM
Email ThisBlogThis!Share to TwitterShare to FacebookShare to Pinterest
Labels: combative adventures, outre outfits (u), the uncanny