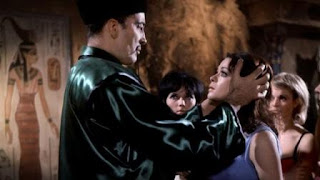 I'm sure that I could find other films starring the recently deceased Christopher Lee that would better summarize his cinematic accomplishments than the Fu Manchu films written and produced by cut-rate filmmaker Harry Alan Towers. Unfortunately, I've already reviewed a fair number of Lee's best works, such as many entries of the Hammer Dracula works. Further, for some time I've been meaning to examine the rest of the series since I examined 1965's THE FACE OF FU MANCHU.

I gave FACE moderate praise for the way the Towers script and the Don Sharp direction put the Chinese devil-doctor and his British enemies through their paces. However, even though Towers and Sharp are once more scripter and director for BRIDES, the result is a dull, murky film. I suspect that when FACE proved successful at the box office, Towers did what many such filmmakers did: instead of trying to keep a constant level of quality, he rushed the next films out in an attempt to "strike while the branding-iron was hot" so to speak.

Just as Fu Manchu did in FACE, the film's action centers around his attempt to suborn various European scientists into helping him create a world-beating threat. He does so by threatening the scientists' daughters, who may be deemed, very loosely, the "brides" of the title, though fiendish Fu shows no interest in them. For that matter, neither does his daughter Lin Tang, who seemed to swing a little toward Lesbos in her first appearance. Fu's sole passion is to create a menacing death-ray, able to strike at any target on Earth by virtue of being carried on "radio waves."

Douglas Wilmer replaces the earlier Nigel Green as Fu's perennial foe Sir Denis Nayland Smith, and at this point he displays less charisma than Green. But then, both Chris Lee and Tsai Chin (as Lin Tang) also give uninspired performances. There are some half-hearted torture scenes thrown in, but the films standout scene is one that now seems risible to modern eyes. While the death ray is being made ready for its first outing, Fu helpfully explains that there's a control lever attached to the mechanism, to keep the machine from overloading. However, at one point one of Fu's assistants tries to pull the lever back, to keep the machine from exploding-- and Fu, consumed with a passion for conquest, shoots the man, thus insuring that the film ends with a big bang-- though Lee's voice is heard saying his usual mantra: "The world shall hear from me again."

The third film also has its share of dull stretches, but Towers came up with a somewhat more gripping story-line. In addition, British television director Jeremy Summers took over directorial duties, including some location shooting in Hong Kong. Summers displays a better sense of composition than Sharp, and there are some adequate fight-scenes, as opposed to the Sharp films' tendency just to have characters wrestle each other around. Best of all, even when the action-scenes are somewhat questionable-- particularly the film's climax-- the score of Malcolm Lockyer, in his sole contribution to the series, makes the action seem more exciting than it actually is.

This time Fu Manchu has no exotic weapons in his quiver, though he still plans to take control of all the criminal organizations of the world, as a prelude to world domination. "How will you do this?" asks Moss, a representative of American gangdom, who sounds like he learned his English in a German beer-hall. Fu plans to undermine the law organizations of the world by having a master plastic surgeon (he's the European captive scientist with the pretty daughter this time) create perfect doubles of the world's top cops, and then ruin their reputations by having the doubles commit heinous crimes.

This sounds like a pretty laborious way to overthrow the world's law-enforcement agencies. However, it works on a deeper psychological level if one deems Fu's grand plan to be nothing more than an excuse to destroy the career of his hated enemy, Nayland Smith-- who is, naturally, the top cop Fu begins with. In short order, Fu's dacoits kidnap Nayland Smith and insert the double in his place. The double doesn't make more than a passing attempt to imitate the routine of Nayland Smith, which seems contrary to the idea of making the illusion succeed with the lawman's best friend John Petrie. Within a day or so, the double commits his crime-- strangling Nayland Smith's housemaid, and refusing to offer any defense of his act in court. Since the housemaid is a young Chinese woman, it's strange than no one suggests that the real Nayland Smith's emnity for Fu Manchu has resulted in a racial hate-crime, though this would seem to be the only reason for producer Towers to cast the murder victim as Asian.

While Petrie and other confidantes try to figure out the strange behavior of their friend, the devil-doctor has Nayland Smith transported all the way to China. Fu acquaints Nayland Smith with the conspiracy and informs him that the only way he can live is to swear allegiance to his former enemy. In contrast to the previous film, this time Lee and Wilmer project a great deal of personal animus toward one another. Nayland Smith succinctly refuses, and the doctor is momentarily piqued, making it clear that he would have preferred to have his old enemy totally submit to him, thus giving Fu a spiritual dominance as well as a physical victory. Given Smith's refusal, Fu announces his plan to execute his enemy at the same hour when the double is hung for murder in England. The English execution goes off without a hitch, and Nayland Smith's friend Petrie is given a strong scene i which to display his grief, since he cannot be sure whether or not an impostor has died.

Fortunately for the English cop, some of his friends send forces to invade Fu Manchu's remote palace. The good guys are able to get into the prison that holds Nayland Smith, the scientist and his daughter. After the heroes beat down various Chinese guards and the American with the strong German accent, they-- escape? No, for some reason they decide to make a show of delivering Nayland Smith up for execution in the palace's central pavilion, right in front of the noses of Fu Manchu and his daughter. Though I got a kick out of Nayland Smith suddenly whipping off his phony bonds and calmly defying Fu, this is a pretty stupid strategy given that the former prisoners are completely outnumbered. Towers, wanting to end the film with yet another big bang, comes up with a way for the good guys to trigger a convenient explosion. They reach safety, but Nayland Smith prophesies that they have not seen the last of Fu Manchu. Given how awful the final two entries in the series were, I imagine most of Fu's fans would probably have preferred that VENGEANCE would have been the last time the villain suffered the tender mercies of Harry Alan Towers.

I note in passing that most of the Towers films, whether they contain marvelous weapons or not, tend to show Fu and his daughter exercising hypnotic powers that verge upon magic, though they are not given a truly marvelous context.
Posted by Gene Phillips at 2:52 PM
Email ThisBlogThis!Share to TwitterShare to FacebookShare to Pinterest
Labels: bizarre crimes (u), enthralling hypnotism and illusionism (u), the marvelous, the uncanny, weird families and societies (u)