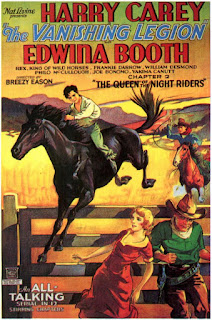 
I'm not devoting any great space to these three naturalistic thrillers except as they pertain to my NUM theory, given that all three make use of visual and auditory motifs that seem to suggest the metaphenomenal.

By its title alone THE VANISHING LEGION seems to conjure with fantasy-tropes, and similar expectations are raised by the fact that the film's protagonist Happy Cardigan (Harry Carey) must contend with the Legion's master, a criminal known only as The Voice.  However, the Legion is just a bunch of men on horseback, and The Voice is only a voice being relayed to his men via radio. It's rumored that the whispery villain-voice was provided by an unbilled Boris Karloff, but this is the closest the serial gets to fantasy.

Carey is personable enough as he comes to the defense of a young boy whose father is framed for murder. However, the action-scenes are dull and uninspired, though some of the fights may prove a relief from the overly mechanical fisticuffs of Republic serials. 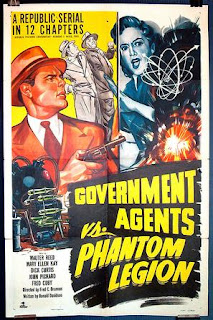 Speaking of overly mechanical Republic serials, GOVERNMENT AGENTS VS. PHANTOM LEGION not only takes the same strategy as the 1931 film-- jazzing up a mundane thriller with a colorful title-- but it even has a mystery villain. He too is called "the Voice," though only in the film's promotional materials, and he orders his "Legion"-- a bunch of suit-clad crooks adept in hijacking crimes-- to start preying on trucks that carry valuable governmental materials.  There's a nugatory attempt to give these truck-heisters the cachet of endangering the government's status through their activities, but this patriotic angle is largely dropped in favor of rock-'em, sock-'em action.

Like VANISHING LEGION, the mere fact that the film has an unseen villain who disguises his identity with a weird voice is not enough to push it into the realm of the metaphenomenal. GOVERNMENT AGENTS's best asset is a stalwart performance from its dependable lead Kirk Alyn, who had better material to work with in two other Republic serials, also released in 1949. 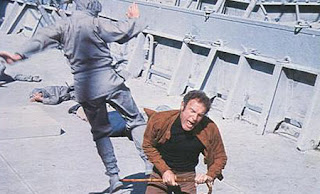 THE KILLER ELITE is not one of director Sam Peckinpah's best-regarded films, and I'm not going to argue in its defense. I've no information on the source novel adapted by the film's two writers-- one of whom, Sterling Silliphant, had already evinced some interest in the martial arts, having collaborated with Bruce Lee in a couple of American productions.

ELITE appears two years after the celebrated American "kung fu craze," and feels a bit like Peckinpah and his company taking a shot at the martial arts genre. James Caan's character Locken, formerly associated with the CIA, undertakes to protect an Asian political figure and his entourage from assassins. Though the Asians in the entourage seem to sport Chinese names, at least one of them, called "Tommie," dresses up like a ninja, as do some of the assassins.

The script continually emphasizes the inefficiency of ninja skills in the modern world of sniper-scopes, which is OK as far as it goes, but it doesn't allow for much of a cultural exchange. But then, the script is far more focused on the relationships between Locken, his allies, and his enemies.

Peckinpah delivers a degree of action at the end, making this a combative film. But his mundane rendtion of the ninjas-- whom seem to be idiots, using swords to attack enemies with automatic weapons-- keeps this film strictly within the isophenomenal domain.
Posted by Gene Phillips at 3:39 PM
Email ThisBlogThis!Share to TwitterShare to FacebookShare to Pinterest
Labels: combative adventures, diabolical devices (n), outre outfits (n), the naturalistic