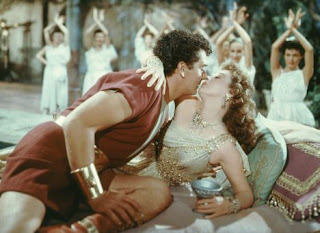 After 1953's THE ROBE made good box-office, 20th-Century Fox rushed a sequel into production, which came out in the summer of 1954, also to good box-office. Whereas the first film was based on a novel, DEMETRIUS simply picks up with the titular character, again played by Victor Mature. Demetrius inherits the robe of Jesus Christ from his former master Marcellus, who was executed for his Christian sentiments at the end of THE ROBE. The Emperor Caligula, who ordered the execution and wanted nothing to do with the "bewitched" robe of the supposedly risen Christ, changes his mind and decides that because he's a god, he ought to be able to derive great powers from regaining the cloth.  Though the robe manifestly has no powers-- it doesn't even give whim-whams to the guilty, as it did in the first film-- Demetrius manages to conceal the robe amidst other Christians. This leads to the "and the gladiators" part of the title, for the Christian Greek is sentenced to gladiatorial school.

DEMETRIUS pays a lot more attention to the sensual and violent domain of Rome than the first film did, and though it's clear that Christianity will triumph in the end, no miracles take place within the scope of this movie's narrative.. Indeed, Demetrius loses his faith for the latter half of the film when he thinks that God has failed to intervene to save the life of an innocent. He garners great fame in the gladiatorial arena, where his name begins to overshadow that of the Emperor, and he allows himself to be drawn into an affair with Messalina, wife of future Emperor Claudius, portrayed here as a mild-tempered old man who doesn't want either power or sex.

There's an eleventh-hour save for Demetrius, and it involves the robe coming back into the story in a fairly contrived manner, and the preservation of the life of the innocent who was believed to be dead-- also a pretty large contrivance. It's interesting that during his apostasy Demetrius remains hostile to pagan gods, reviling Messalina's god Isis as an abomination. Peter (Michael Rennie) makes an appearance but doesn't do much of anything. Considering how quickly the film was turned out, production values and performances are decent all around. Jay Robinson repeats his role as Caligula from the previous film, and enjoys the script's juiciest lines as the representative of the ultimate hubris in the Christian world, that of a man pretending to be God.

BARABBAS, produced by Dino de Laurentiis in his salad days, isn't nearly as by-the-numbers as DEMETRIUS. The 1961 film is, like THE ROBE, based on a novel whose purpose was to expand on the drama of minor characters connected to the Christian Passion. Barabbas is mentioned in all four Gospels as a man imprisoned by Roman authorities in Judaea, though it's not clear if he's a mere bandit or someone actively involved in rebelling against Roman power. In accordance with Passover customs Pilate offers the citizens of Jerusalem the choice as to whether to release Jesus or Barabbas from captivity, and the citizens choose Barabbas.

I don't know about the Par Lagerkvist novel, but the film never makes clear why Jerusalem is so anxious to free Barabbas (Anthony Quinn). This version of Barabbas is simply a common thief who exists in a world that countenances nothing supernatural, though the title character is somewhat flummoxed when his own girlfriend turns Christian. In addition, the thief witnesses the crucifixion of Christ and beholds the "darkness at noon." He also meets the risen Lazarus and hears testimony as to Christ's rising, but refuses to become a believer. Barabbas then endures a tumultuous life, being condemned to slavery in the mines, battle in the gladiatorial arena, and finally, the "imitatio dei" of dying upon a cross for the sake of the True Religion.

As an actor Quinn tended to "dog it" at times, as one may see in his rather lazy performance in 1954's ULYSSES. But Quinn does seem to fully inhabit the character of the bemused thief, and never more than in his scene alongside Lazarus. I presume that the portrayal of Lazarus in the film is in line with the novel, and it's an odd one. Lazarus's response to being raised from the dead is not recorded in any Biblical narratives, but it seems rather odd that the film portrays Lazarus as being little more than a zombie, showing no interest in the world of the living. It may be one of the creepiest scenes ever seen in a film devoted to the wonders of Christian grace.

Posted by Gene Phillips at 3:46 PM
Email ThisBlogThis!Share to TwitterShare to FacebookShare to Pinterest
Labels: phantasmal figurations (n), the marvelous, the naturalistic