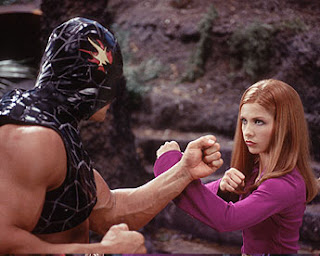 I certainly haven't seen all of the multitudinous incarnations of the SCOOBY DOO franchise, which would seem on the face of things to be the most successful (in terms of longevity) television cartoon thus far. However, I'll hazard that the two live-action films are the only time there was a concerted effort to make the characters conform to a combative mode.

For most of the Scooby Gang's career, they've been comic heroes within a subcombative mode-- which is to say that although they serve a heroic function by tooling around the country exposing the schemes of phony ghosts, they do so without resorting to a combative level of violence. Their most common method of restraining the fake monsters-- and occasionally real ones-- is to catch them in some sort of absurd trap. This became such a regular feature that in the 2010 MYSTERY, INC. teleseries, the character of Fred became a geek obsessed with the making of increasingly arcane traps.

Since the producers had been trying to launch a live-action version of the cartoon since 1994, it's impossible to know whether they always meant to "soup up" two of the Scooby Gang's regulars, Fred (Freddie Prinze Jr.) and Daphne (Sarah Michelle Gellar). The only information I've found asserts that the early plans were to produce an ironic take on the cartoon series, and that even during shooting they changed horses in mid-stream, making the first SCOOBY more "family-friendly" and exiling some of the adult humor to deleted scenes. I can't help but suspect that the casting of Gellar as Daphne-- then famous for her role on the BUFFY THE VAMPIRE SLAYER teleseries-- was the motivating factor, though, since Daphne's entire character-arc in the film consists of her casting aside her "damsel in distress" past and becoming a kickass femme-formidable. Fred in the cartoons showed no more martial abilities than Cartoon Daphne, but he too becomes a kickass hero in live-action SCOOBY DOO. Since actor Freddie Prinze Jr was dating Gellar at the time, it seems possible that the character of Fred also got a power upgrade so that he wouldn't seem like a wimp next to his girlfriend.

As for the finished film, it's got a few fun moments, but it suffers from a lazy, contrived plot which may be the legacy of the original satire-oriented plans. The Scooby Gang, fresh from another successful fake-monster bust, breaks up due to wounded feelings. However, a rich fellow named Mondavarious needs a mystery solved, so he invites the whole gang out to his horror-themed island resort "Spooky Island." The Scoobies agree to take the case, though not without some thoughts of trumping one another. Eventually they're able to set aside their differences and work as a team once again.

The big weakness of the 2002 film is that the nature of the menace is contrived and not especially threatening, even though it involves a bunch of soul-stealing demons and the return of the Scooby-franchise's least popular support-character, "Scrappy Doo." There are some faint laughs when the young sleuths lose their "spirit thingies" to the demons, and in trying to regain their original bodies manage to wind up in the wrong vessels for a time. The action-scenes, despite being played for comedy, are perhaps the film's best feature. 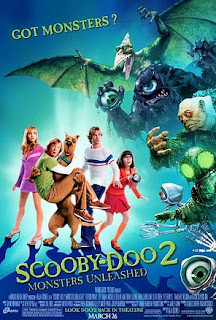 SCOOBY DOO 2: MONSTERS UNLEASHED is such a huge improvement over the first film that I can hardly believe that the script and direction come from the same talents, James Gunn and Raja Gosnell. Perhaps once the creators had committed to doing a Scooby film for all of the fans who grew up loving the characters and their menagerie of monsters, that conviction allowed them to play along with the franchise-mythos rather than fighting against it.

It helps, of course, that the Scooby Gang are a team throughout the story, rather than being on the outs with one another. In place of being piqued with one another, this time most of the characters take a leaf from the Daphne of the first film, who was conflicted about her efficacy in her arc. Thus Fred is concerned about being perceived as a wimp, Velma (Linda Cardellini) is worried about being able to have a relationship with cute geek-boy Patrick (Seth Green), and both Shaggy and Scooby (Matthew Lillard, voice of Neil Fanning) fret about being screw-ups. In addition, an Evil Masked Figure is attempting to make the Scoobies look bad in the eyes of their home town Coolsville. Though the young heroes had already fought real monsters in the previous film, as well as a number of cartoon iterations, MONSTERS UNLEASHED takes a clever turn into geek-continuity by having the evil mastermind create real-monster incarnations of the fake ghosts from the cartoons. The 2004 film is particularly clever in selecting most of the fiends from the original 1969-71 SCOOBY DOO WHERE ARE YOU teleseries: The Black Knight, Captain Cutler's Ghost, and the Miner 49'er. That said, even some of the later funny fiends taken from later cartoon-serials, such as the Tar Monster and the 10,000 Volt Ghost, are used to produce both strong action and good comic bits.

It's just as well that this particular series ended on this high point, for the strength of the sequel probably couldn't have been duplicated. I should mention that in some ways Cardellini and Lillard, though not playing the "sexy" characters, prove much more integral to selling the exploits of a live-action Scooby Gang.

Posted by Gene Phillips at 3:47 PM
Email ThisBlogThis!Share to TwitterShare to FacebookShare to Pinterest
Labels: combative comedies, the marvelous