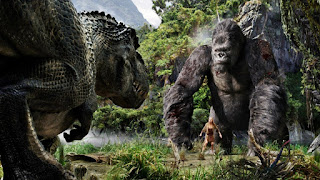 
When I first saw Peter Jackson's KING KONG in the theater, I couldn't be too analytical about it, having been bored out of my mind with the way Jackson padded the film with almost an hour-long boat-trip to Skull Island. Now, watching the film again on DVD, I could ignore a lot of the padding and focus on the essence of Jackson's foredoomed attempt to remake a classic.

While watching the pacing of Denham and Co. once they arrived on the island and began to see the great ape who was "king in his world," I found myself making comparisons between Jackson and George Lucas-- and not favorable ones. Jackson succeeded for the most part in translating Tolkien's Ring trilogy to film, and in retrospect I think Jackson's approach on LORD OF THE RINGS was one of the few times a major director has emulated the way George Lucas might have handled the story, at least in Lucas' better moments.

Lucas, it should be said, has been imitated to death in terms of his content, but rarely in terms of his directorial style-- probably because the Lucas style is such a patchwork, working really well at times and very poorly at others. Jackson's KING KONG-- his first project after Jackson finished his first Tolkien trilogy-- emulated Lucas' less admirable moments. All through KING KONG I found Jackson arranging his big action-sequences-- Kong's battle with two tyrannosauri, the ship's crew being attacked by multiple creepy-crawlies-- with a sense of mind-numbing overkill, not unlike the way PHANTOM MENACE subjected audiences to one of the most tedious race-scenes in a major cinematic release.

Because Jackson is so concerned with mounting snazzy CGI-scenes, he shows absolutely no ability to duplicate the strange visual poetry of the 1933 original, or even 1976's more political reading of Kong. The dreamlike racial fantasies of the 1933 film were of course impossible in 2005. Not only are the islanders no longer Africans-- most of them are made up to look like the Maoris of New Zealand-- but Kong's "apeness" is highlighted. There's no sense that Kong the Dumb Ape cherishes some unfeasible romantic fantasies toward Ann Darrow; he simply becomes attached to her, in the acceptable way that an ape might become attached to a beloved companion. A long and tedious "let's get acquainted" scene between Ann and Kong establishes that their bond is not that of eros, even one-sided eros-- but the bond of humor. (The side of Naomi Watts doing a soft-shoe dance to impress the big ape was actively depressing to me.)

This Kong, unlike the more negligible character from the 1976 film, is as much of a badass as the 1933 original, though as I said Kong's fights with his dinosaur adversaries suffer from serious overkill. In my review of the original film I opined that the final conflict between Kong and the biplanes suggested the "knightly code of honor" common to WWI pilots. I will say that Jackson does present the foredoomed conflict between the ape and the fighter-planes with more energy than the slack conclusion of the 1976 KING KONG. But the nature of the conflict is in my eyes severly undermined by making Kong nothing more than a big animal. Even though Jack Black dutifully speaks the classic final line, there's no real sense that Beauty killed this Beast.

It was CGI-overkill that raped this ape.

Posted by Gene Phillips at 3:41 PM
Email ThisBlogThis!Share to TwitterShare to FacebookShare to Pinterest
Labels: combative dramas, the marvelous