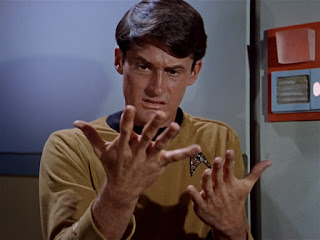 The action in “Man Trap” begins because two archaeologists are investigating an alien world; the home to a nearly extinct species. In “Naked Time” the ship seeks out a planet doomed to break apart, in part because a contingent of scientists have set up operations on the planet's surface. The scientists' purpose is to gather data regarding the world’s impending destruction. But to study destruction is to court it as well. An Enterprise landing-party descends to the planet, garbed in protective suits to shield them from the elements, but they find all of the scientists dead, apparently as the result of their having lost their minds. Once again there's a fear that an alien contagion will spread, though this time only the Enterprise and the closed society aboard it will be affected.

Early in the story, the ship’s officers stress their need to be able to clear of the disintegrating planet at a moment’s notice. Engineer Scott is particularly confident that they can escape without a hitch. However, he doesn't know that one man in the landing-party, a fellow named Joe, proves himself to be "the weakest link." Even though everyone in the landing-party wears protective suits, Joe decides to pull off one of his gloves for a moment, with the result that he’s infected by some virus native to the planet. (This would not be the last time when a member of the Enterprise crew performed an action of supreme recklessness, apparently for no good reason but to get the story moving.)

Within less than an hour, the organized military hierarchy of the Enterprise breaks down, as crewpersons begin to act out their fantasies. Interestingly, Joe acts out a fantasy of inadequacy and pessimism that forms a polar opposite to the Federation's  can-do optimism. “We don’t belong here,” Joe complains, at first threatening his colleagues and then knifing himself. However, as McCoy observes, Joe perishes not from his wounds but from having lost the will to live.

In this episode at least, indulging the impulses of the Id has the cumulative effect of giving up on the real world. Some of the responses to the disease—transmitted from one person to another through the medium of sweat—are largely harmless, as when Sulu fantasizes that he’s a Muskeeteer and threatens crewmen with a rapier. Riley, another crewman to have direct contact with Joe, seems to be in a similar mode when he convinces himself that he’s the captain and starts issuing ridiculous commands to his crew. However, in his delirium he shuts down the ship’s engines—the very thing Scott needs to whisk the Enterprise out of the clutches of the doomed planet. Thus, in a very real sense, Riley is every bit as suicidal as Joe, but he wants to take everyone else with him, under the delusion that they’re all going to have more fun under his command.

Almost as damaging as male ego is feminine eros. The only female to become infected is Christine Chapel, introduced to audiences in this episode as a sick-bay nurse who’s desperately in love with the half-human Spock. The disease emboldens her to profess her love to Spock, who feels compassion for her but nothing else. However, because she touches him and transmits the disease, Spock’s logic is rendered inert by an outpouring of uncontrollable emotions. This leads to the highly regarded centerpiece of the narrative.

Kirk, not yet infected, seeks out Spock, hoping to utilize Spock’s scientific acumen to re-start the Enterprise engines and save the ship. In the process of trying to slap some sense into the demented Vulcan, the two men apparently exchange sweat—a scene which must be a great favorite with fans of Kirk-Spock slash-fiction. Spock, initially maudlin over his inability to confess his love for his mother, becomes racially hostile, telling Kirk that he sometimes felt “ashamed” of being friends with a human. He returns Kirk’s blows with one of his own, and almost immediately, the worst effects of the disease pass out of Spock and into Kirk. If anything, Kirk’s confessional is more extraordinary—and less human—than that of the half-human Spock, as the captain reveals that he feels bonded to his ship as if it were the only real love of his life. This psychological issue is never substantively raised again, but it might go a long way to explaining Kirk’s later status as a player who never finds a permanent beloved.


Only at the end does the title take on significance. Up to this point, the “naked” part of the title clearly signified the way all of the crewpersons were revealing their inner selves to their colleagues. But when Kirk and his allies succeed in re-starting the engines, they also accidentally propel themselves backwards in time. When the ship returns to normal time, Spock comments that they now have “three days to live over again.” Kirk wryly comments that he certainly doesn’t want to re-live the same three days. In a symbolic sense, though, the travel in time—from a plot-;perspective, not really necessary so that the ship can escape danger—may also represent a “triumph over time.” Time is the medium through which all mortals gather experience, which in turn leads them to build up fantasies of what-could-have-been or should-have-been. By escaping the orbit of the dying planet, Kirk and his crew have also metaphorically escaped, at least for a little while, the tyrannical  dominion of time over their lives, even if their ultimate goal remains that of service to the “jealous god” of reality.
Posted by Gene Phillips at 2:03 PM
Email ThisBlogThis!Share to TwitterShare to FacebookShare to Pinterest
Labels: combative dramas, the marvelous