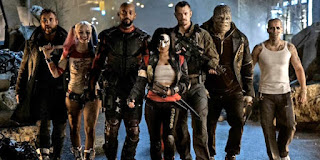 But when I see such potential wasted, I’d rather watch a popcorn film—again, like the aforementioned He-Man film-- that never had any potential from the get-go.


Unlike the He-Man cartoon, the comic book SUICIDE SQUAD had at least as much potential to spawn a good film as Marvel's GUARDIANS OF THE GALAXY franchise (if not more). The comics-series, largely masterminded by writer John Ostrander, culled an assortment of villains and near-villains from various DC features and obliged them to work for the U.S. government on various compulsory "black ops" missions. Ostrander's stories walked a fine line between two politically opposed postures: (1) enjoying the Squad's freedom to assail terrorists and drug-lords in extra-legal ways, and (2) questioning the price paid by the characters for indulging in such displays of power.

In the cinematic SQUAD writer-director David Ayer toys with both of these postures, but in the end commits to neither, for he is at base making a "summer popcorn film." That doesn't mean that there's no interesting content in SQUAD, but a lot of the content is rendered generally incoherent due to a sloppy script that relies on lots of repetitive action-scenes. And yet, despite all of the dubious directions of SQUAD's plot, it accomplishes its aim, for it's a fun film, as long as one doesn't for a moment take it seriously.

I would conjecture that Ayer couldn't possibly have approached this project without being aware that it had the same potential problem as Marvel Studio's 2014 GUARDIANS OF THE GALAXY: that most of the characters were unknown to the American mass audience, the major exception being Squad-member Harley Quinn, mostly known for her relationship with Batman's signature villain The Joker. Regardless of what Ayer thought of Gunn's film, the former has sedulously followed the earlier film's central idea of " loners who find their real raison d'etre in being parts of a buddy system." However, though Ayer brings his Squad together in roughly the same manner, most of the characters' "bonding moments" are horribly contrived, and the director never succeeds in selling the group as being even so much as a company that shares the same misery, much less the "friends" Harley Quinn dubs them. The original comic book makes clear that the majority of the Squad members are damaged people, if not outright assholes, but Ayer isn't quite able to go that dark-- though it's at least interesting that the film more or less concludes with the six criminal members of the team back in their separate cells. Having them sitting around eating schawarma would have been even more of a betrayal than any mediocrities of individual characterization.

As in most popcorn-films, the majority of the characters are given minimal characterization, and SQUAD is no exception. I have no opinion on any previous incarnation of the "Diablo" character, as I frankly don't know who or what he's based on. (Ironically, he's the only character in the group who has a level of power capable of going toe-to-toe with the menace du jour.) However, in comics there have been much better character moments for most of the other super-crooks-- specifically, Killer Croc, Boomerang, and Deadshot-- and for both of their handlers, non-criminals Captain Rick Flag and Katana.

The popcorn-ization of the characters of Boomerang and Croc didn't bother me much; their virtues are pretty tough to put across in a stand-alone movie. Katana comes across a little better, given that she usually hasn't been much more than a stock "rigorous samurai" in her comics incarnation. Flag's not a profound character either, but given that he's supposed to be the leader of the motley crew, his cinematic version suffers much the same way that the cinematic Cyclops suffered beneath the taloned shadow of Wolverine

And who's the alleged "Wolverine" of the movie? Well, if you go by the lion's share of allegedly clever dialogue-lines, it's the movie's version of Deadshot. I try not to be offended when a film drastically revises a favorite character. But in place of Ostrander's driven, trying-to-be-affectless killer, Ayer substitutes a one-dimensional "I'll slap you up side the head" badass with no redeeming character points. Possibly this version came into existence purely to showcase the limited talents of Big Name Star Will Smith. However, whereas Hugh Jackman sold audiences on the appeal of Wolverine by sheer talent, Smith simply coasts on playing a character-type he's already done before. To be sure, the audience with which I saw the film laughed at Smith's lines frequently, so my negative reaction to this dumbed-down Deadshot may not be representative.

However, I was on the same page as many audience-members and reviewers, in feeling that the characterization of Harley Quinn saves the film. Ayer gives Margot Robbie all the best lines, and Robbie takes advantage of her character's sexy zaniness to upstage pretty much every one else. She also has the strongest character-arc, although there are rumors that in an earlier draft she might have rejected the Joker near the film's conclusion. I wouldn't mind seeing this potential plot-point explored in a future tale, but for Harley's first live-action adventure, I think Ayer made the right choice by keeping her bound to "Mister J."

As for the Joker, his nugatory role in the story didn't bother me. Jared Leto's tattooed, bling-busy nutcase is essentially the living incarnation of the film's edgy, graffiti-filled design. In fact, both he and Batman (nicely essayed by Ben Affleck, despite the brevity of the scenes) serve as the dark background to the world of the Suicide Squad.

The thing I like most about SQUAD has nothing to do with the film itself, but with the chances for Warner Brothers' DC films to do what I advocated in my review of DAWN OF JUSTICE: "to formulate a superhero universe with its own unique tonality." SQUAD is a supremely sloppy film, but it has an aesthetic that doesn't look like the Marvel product, particularly the ultra-slick GUARDIANS OF THE GALAXY. In the comics-world Marvel tended to pursue a middle course, while DC always seemed to pursue extreme poles of creativity, going from the bright world of Silver Age Superman to the fearsome abyss of the Vertigo titles.

I don't know if future films will deliver on the potential of either creative pole. But SUICIDE SQUAD, rough beast though it may be, may at least be the harbinger of better films, films able to slouch all the way to Bethlehem.
Posted by Gene Phillips at 3:47 PM
Email ThisBlogThis!Share to TwitterShare to FacebookShare to Pinterest
Labels: combative adventures, the marvelous