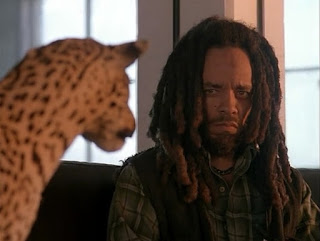 
SURVIVING THE GAME is a compelling, though not to say riveting, take on the classic "human hunted by other humans" trope. This Ernest Dickerson directorial effort infuses the original Richard Connell plot with racial content, in that this time the victim is Jack Mason (Ice-T), a homeless black man who's talked into coming along on a hunting-trip by several wealthy men. Most of the hunters are white guys, but one of them is black, as well as being the fellow who talks Mason into participating in the adventure. This effectively transforms the film's theme from one of racial opposition to one of class-opposition, implying the moral that black people can get sucked into the pit of upper-class privilege.

The action-sequences are nicely done, even if the viewer has to roll with the idea that city-guy Mason can learn, while on the run, how to evade and eventually kill off most of the men pursuing him. In addition, the flick displays a cornucopia of strong actors-- Rutger Hauer, Charles Dutton, Gary Busey, and F. Murray Abraham-- though the only strong dramatic arc is that of Abraham's character and his son (William McNamara), who gradually become alienated from the "dangerous game."

I confess that my main interest in viewing the film was to decide, as I did with two other films using this trope,  whether GAME's usage of the "bizarre crime" of human-hunting falls into the "uncanny" or "naturalistic" Though the later film lacks any of the Gothic touches of the original MOST DANGEROUS GAME, I find that the 1994 GAME displays the same "grandiosity" characteristic of bizarre crimes in the uncanny domain. The script by Eric Bernt-- his best work, in my opinion-- never allows the viewer to forget the enormity of the hunters' crime, and because of that, Mason's triumph over them also acquires the spectacular dimensions of the combative mode.

Posted by Gene Phillips at 12:50 PM
Email ThisBlogThis!Share to TwitterShare to FacebookShare to Pinterest
Labels: bizarre crimes and crimefighting (u), combative dramas, the uncanny