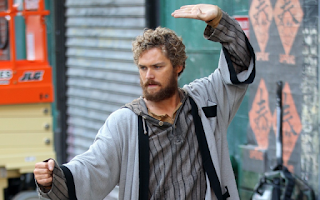 
I've sometimes devoted one review to an entire television series, as with the 1990s Superman cartoon, and sometimes to a smattering of episodes in separate reviews, as I did with my incomplete survey of the KUNG FU teleseries.  This falls into the latter category, as I've only watched the first five of the thirteen episodes, which is about the same number of episodes that the "pro" critics watched before widely trashing it in online media.

One common complaint voiced concerned the level of action in the series. It's true that there's nothing here that even equals the better Jean-Claude Van Damme movies, much less the classic Hong Kong kung fu flicks, Yet the slow pace of IRON FIST is echoed in earlier Netflix online serials like DAREDEVIL and LUKE CAGE, and in all likelihood said pace is mostly a matter of economics, not lack of talent. The FIST fight-scenes are adequate, but the overall strategy of the show's producers is to draw viewers into the emotional world of Danny "Iron Fist" Rand. If they succeed in making you care about Danny as a character, then in theory you'll be more invested in his welfare than whether or not his battle with a gang of hatchet-wielding Triad gangsters comes up to the level of a Jet Li flick.

It's not by accident that I worked in a reference to the 1970s series KUNG FU, for the earlier series parallels some if not all of IRON FIST's direction. Both serials emphasize action enough to qualify for the mythos of adventure, but both also incorporate strong dramatic elements into the mix. Admittedly KUNG FU is superior to IRON FIST in both content and visual style. That said, the earlier series focused more on the main character Caine helping out "guest star" characters during the hero's peripatetic journeys, while Danny Rand is grounded in New York as part of his dramatic arc.

Rand's situation in a nutshell: fifteen years ago he-- a child of ten-- was lost in an airplane crash over the Himalayas, as were his wealthy parents. At age 25 he shows up in New York, seeking to connect with the Rand Corporation. the only link he has with his past. In the absence of the Rand family, the Meachams, the grown son and daughter of the elder Rand's partner, have assumed control of the company. Danny can't initially prove who he is and the Meachums don't initially want to listen to his story: that he was rescued from a freezing death by the monks of K'un-Lun. The explanation for his long absence-- that these monks inhabit a Brigadoon-like city that only intersects with the Earth-plane on rare occasions, and that Danny simply couldn't get back-- does not go over well.

While the dramatic resolution of Danny's identity problems might have been tighter, I found it interesting that the producers chose to resolve them gradually, given that the more common resolution in pop fiction is to have the doubters convinced immediately by some supernormal demonstration.  Though the leisurely pace is probably born of an economic need, the producers made the best of the situation, allowing the involved heritage of the partners and their children to unfold in a naturalistic manner.

It's been said online that star Finn Jones plays Danny Rand as a "ten year old in a man's body." This is inaccurate. Danny Rand's struggle in the series during the first five episodes is that of a grown man attempting to re-connect with the memories of his childhood, now layered over with the experiences he's had in the past fifteen years-- experiences that include not just living in a culture very unlike that of his birth, but also one in which things like dragons and disappearing cities are commonplace. In addition, because other Marvel serials have introduced Frank Miller's evil ninja-clan "The Hand," this group now becomes an opponent for Iron Fist, whose original comics-incarnation predates Miller's DAREDEVIL run. In emulation of the gritty, down-to-earth approach in Netflix's DAREDEVIL series, marvelous powers and creatures don't show up in the streets of IRON FIST's New York quite as often as they do in the Marvel Comics New York-- which adds to the tension, in which Danny Rand's story is simply not creditable in real-world terms, despite the fact that the Avengers and their ilk exist off on the margins of the Netflix universe.

I've already expressed my feelings on the matter of so-called cultural appropriation in this essay, but I should add that some of the aforesaid reviews apparently thought it was cool to fight racism with racism, as seen in this nearly incoherent piece from COMIC BOOK MOVIE:

The current MCU is very white. Danny Rand is a pretty lame character to begin with. Having him be an asian would have brought an actually interesting aspect to his character, especially as a fish out of water to a mystic asian culture. Instead we get some boring white guy about to do some more typical white guy stuff.

Now, if I were to say that all black guys were inherently boring, or all Asian guys-- who would fail to label that racism? But generalizing about Caucasian characters gets an automatic pass from ultraliberal types-- not to mention the reviewer's reverse-racist conviction that not being white automatically makes a character "interesting."

Neither in any comics-incarnation nor in this series is Danny Rand likely to set any records for "greatest white character." But whatever shortcomings the character may have certainly do not depend on his race.
Posted by Gene Phillips at 2:59 PM
Email ThisBlogThis!Share to TwitterShare to FacebookShare to Pinterest
Labels: combative adventures, the marvelous