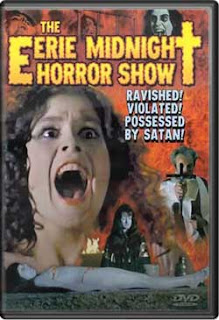 
The shadow of THE EXORCIST looms large over both of these otherwise unrelated "possession" flicks.

The 1974 film used many names, ranging from the sleazy (THE SEXORCIST) to the derivative (THE EERIE MIDNIGHT HORROR SHOW), but ENTER THE DEVIL is probably the most accurate, since, like the earlier film, it's all about what happens when the Devil is allowed to enter into one's life-- not to mention one's body.

The first half of ENTER is fairly intriguing. Young art-student Danila observes the restoration of an ancient wooden statue, carved with incredible fidelity to look like Christ in torment. The status fascinates her, in contradistinction to her depressing home-life. Her upper-class parents Mario and Luisa give a lot of loud parties, and Luisa has a young lover, of which Mario is blandly aware. Danila even looks in on one of her mother's trysts, wherein she satisfies masochistic tendencies by letting her male lover whip her with a bouquet of thorn-bearing roses.

Though Danila doesn't do anything wrong, the sins of her parents apparently opens her up to corruption. Later she visits the place where the wooden statue is kept, and, to her dismay, the statue comes to life and rapes her. It then disappears, with the general implication that it was either Satan or some lesser demon, though there's no attempt to explain why this devil chose to assume the form of a statue. Since the experts assert that the statue was carved whole from an olive tree, a pagan explanation, like the statue being inhabited by a lascivious wood-sprite, would make a lot more sense than any Judeo-Christian scenario.

Whatever the statue's provenance, it passes on its demonic nature to Danila, who starts becoming erratic and seductive. Given that one of her attempted conquests is her own father Mario-- who refuses her advances-- it's not hard to see the Freudian "rescue fantasy," in which a daughter seeks to "save" her father from the influence of a corrupt mother. However, the film quickly drops any potential mother-animus, for Luisa responds to her daughter's travails by dumping her lover. He gives her some static and promptly disappears from the story. The loose implication is that the marriage of Marco and Luisa has been "saved" once they bond over their daughter's situation, which I guess would go toward inverting the movie's suggestion of an Electra complex.

In contrast to THE EXORCIST, ENTER has a fair first act while the second and third go down the tubes. Danila runs around, spitting green goo and attacking her exorcist with a chain. Aside from the actress's nudity, the exorcism itself is a bore, and it seems likely that the creators were just phoning things in at this point. ENTER does exemplify the Italian culture's fascination with the disruptive potential of sex, but that's about all it has to offer. 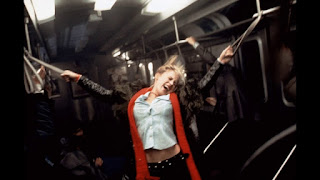 STIGMATA was filmed long after the EXORCIST craze, and it's more ambivalent about what power causes a young American woman, Frankie (Patricia Arquette) to manifest the stigmata phenomenon, in which the victim bleeds from the same parts of the body where Christ was wounded.

Long before encountering Frankie, Father Andrew Kiernan is working for the Catholic Church, seeking to use both tools of science and religion to examine purported miracles. His latest case takes place in Brazil, where, following the death of a beloved priest who experienced the stigmata, a votive statue of the Virgin Mary weeps blood-tears at the priest's funeral. Unbeknownst to Kiernan, a rosary possessed by the dead priest is sold to an American tourist in Brazil, who sends it to Frankie in America. Kiernan is also sent to America to investigate Frankie's stigmata, and makes the connection: that the rosary has somehow "passed on" the priest's nature to the American woman, who is, incidentally, an atheist.

Though Kiernan's superiors strongly suggest that his real job is only to deny, never to confirm, the existence of non-canonical miracles, the priest soon learns that the dead priest had access to a new Christian gospel, roughly cognate with the Gospel of Thomas. Though Frankie does a lot of EXORCIST-like things, such as speaking in a male voice and tossing Kiernan around, the film seems to imply that the unwanted influence is more akin to a ghost than to a demon, though the script never quite states this outright. Indeed, Frankie's experience-- as seen in the screencap above-- puts her through the ordeal of an "imitatio Christi," as when she's seen "crucified" inside a subway-car.
However, the script, taken from an original story by Tom Ramage, doesn't seem to know how to make its ideas cohere, least of all what the viewer is supposed to feel toward the Catholic Church. Are they sentinels who stand against the horrors of possession, or just a bunch of guys trying to protect their own interests? Further, though there's some suggestion of an attraction between the male and female lead, the script also doesn't allow this potential to develop in any interesting directions.

STIGMATA is a well-mounted spectacle in the subgenre of "religious horror," but it doesn't know how to deliver a pay-off on the very issues it raises. The contrast of the two movies makes me wonder: what's worse, to make intellectual pretensions and fail to justify them, or to go "down and dirty" and mess up what ought to be fairly simple?
Posted by Gene Phillips at 3:33 PM
Email ThisBlogThis!Share to TwitterShare to FacebookShare to Pinterest
Labels: the marvelous