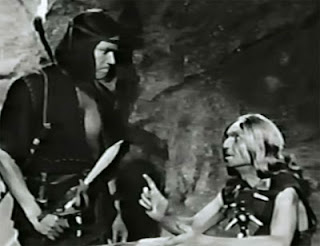 
Though I've frequently given ample space to serials that are top-of-the-line, the majority of them are pretty workmanlike, and don't reward close study. It's certainly not because many serials are cheap, since I've devoted full reviews to 90-minute horror films that might not be great, but may have some interesting theme or motif worth mentioning. American sound serials, however, offer almost nothing but action, and when action is handled in a repetitive manner, rather than by people who know how to make it fresh every time, the serial can become a study in tedium.

KING OF THE CONGO hails from the era when serials were beginning to be marginalized by television. It's a little surprising that the filmmakers chose to derive their scenario from a comic book that wasn't especially well known in its day. Of the three serials I cover here, CONGO had the greatest potential, which it didn't really exploit, though it's still the best of the three.

The serial's opening loosely resembles the setup of the 1950s jungle-comic, THUN'DA, KING OF THE CONGO, which concerned Roger Drum, a modern-day pilot, who crashed to earth in one of Africa's many unexplored valleys. In the comic, Drum enters a pocket "lost world" inhabited by both dinosaurs and primitive cave-people, and he becomes the leader of one such primitive tribe, who give him the name "Thun'da" to denote his leadership. The comic didn't keep the prehistoric elements very long, but CONGO presents them in an ambivalent fashion. There are of course no dinosaurs, which would have cost big bucks, but though there's a mysterious mist shielding the valley from the outside world, the script never explicitly says that the tribes living there are descended from prehistoric ancestors, even though the tribe that takes in Drum has a giveaway name like "the Rock People." Nevertheless, Drum's transformation into barely-clad jungle-hero is unusually faithful to the comic book origin.

However, Dtum isn't the only one to land in the mist-shrouded valley. A group of spies-- never explicitly called Communists, though they use terms like "comrade" to one another-- infiltrates the terrain, looking for a legendary mineral that might help them win the Cold War. The mineral gives CONGO a more marvelous nature than one finds in most jungle-serials. Though one can't be sure that the Rock People and their neighbors are direct descendants of Paleolithic types, the weird mineral is apparently the source of the enshrouding mists. It also has strange effects on those who come too close, for one episode's cliffhanger consists of Thun'da and another good guy getting "magnetized" to the side of a mineral-bearing rock.

Aside from the mystery of the miracle mineral, and the peregrinations of the prehistoric peoples, CONGO is largely another serial full of seesaw battles and little character interest. Buster Crabbe essays Thun'da, and though he was about 15 years older than he was in his Flash Gordon days, he still gave his role considerable charisma. Unfortunately, the spies are all one-note villains, so Thun'da doesn't have much to work with. One odd note is that in a couple of scenes the Rock People's elder seems to display limited magical powers-- he can foresee ongoing events in a crystal ball-- but there's no attempt to credit his powers to the miracle mineral or any other pseudoscience-explanation. 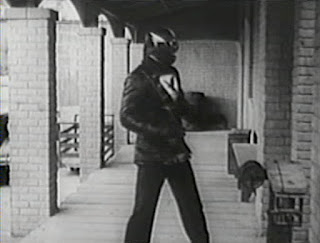 Jaunting back to pre-WWII times, FLYING G-MEN was one of many pop-culture stories to subject America to Axis attacks long before the country was officially at war-- though naturally, the saboteurs are not explicitly identified as agents of Germany or any other Axis ally. Still, acts of sabotage are on the upswing. American intelligence decides to bring together four G-men who all have piloting-experience to serve as counter-terrorists. All four men flew together as a group called "the Sky Hawks," and they're charged with ferreting out the mysterious leader of the sabotage-ring, "the Professor."

In the first episode, one of the G-men is killed. Since the four pilots are almost identical to one another, the murdered man simply functions as an emotional rallying-point for the three remaining crusaders. As an additional touch, one of the three men operates with a double identity, occasionally taking on the identity of a masked pilot, the Black Falcon. The reasoning for the masked identity seems fuzzy at best, and was probably just a bald imitation of a similar motif in the successful LONE RANGER serial, in which that Ranger was suspected of being one of three local cowpokes. However, there doesn't seem to be a clear and present need for any single pilot to do his work in a costume, though there's some eyewash about the Falcon being able to do things that the other agents cannot. This time both the mystery hero, the other two hero-pilots, and their villains are all pretty vanilla, though there are some OK aerial dogfight scenes. 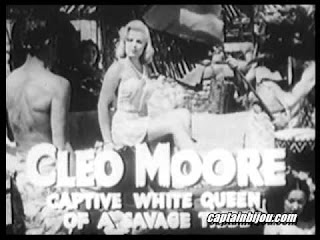 CONGO BILL, an adaptation of DC Comics' long-running second-stringer, rates even lower than the previous two. The basic plot traces back to the serials of silent days, as it involves schemers who want to profit by getting an heiress out the way. The script for BILL crosses this plot-germ with the "white queen of the jungle" notion. In this case, the heiress in question, one Ruth Culver, became lost in Africa, and became the white queen to an isolated tribe. However, even while the villains mount an expedition to find and kill Ruth, in order to protect their access to the trust fund that should be hers, Congo Bill is asked to find her and bring her back to civilization. Thus is the stage set for (again) an assortment of seesaw battles between thinly characterized goodies and baddies.

On one level, Ruth's status as "white queen" over an African tribe isn't as socially problematic as it is in other films. This hidden tribe is composed of a bunch of white people, even though, as in many jungle jaunts, the tribesmen dress more like Polynesians than like Black Africans. The fact that the tribe is white is the only thing that causes me to label them as uncanny in nature, for they're not exotic in any other way. BILL's script doesn't give the natives any interesting cultural habits or practices, and they aren't even all that possessive of their white queen when Congo Bill shows up to liberate her.

Only one other element makes this a metaphenomenal film: one of the villains tries to torture information out of Congo Bill using a peculiar rotating-blade device. It's not clear as to why someone in the deep jungle chose to concoct such a Poe-esqae contraption. Further, the fellow who owns it doesn't have the marginal excuse of being an evil genius, like the villain in FEDERAL OPERATOR 99, who utilizes just one metaphenomenal gimmick against his heroic antagonist.

The Congo Bill of the comics was a marginal presence at best: largely just a space-filler whose career has never been well-regarded by afficanados of Golden Age comics. Thus, in contrast to the adaptation of THUN'DA, this serial doesn't lose points for not making the best possible use of the original material. Don McGuire portrays the white hunter-hero with a brusqueness unusual in serial heroes, but he's not at all likable, while Cleo Moore's Ruth lacks any queenly attributes. There's one good scene where Bill is menaced by a gorilla, but everything else is fairly ordinary.


Posted by Gene Phillips at 3:01 PM
Email ThisBlogThis!Share to TwitterShare to FacebookShare to Pinterest
Labels: combative adventures, exotic lands and customs (u), outre outfits (u), superlative skills (u), the marvelous, the uncanny