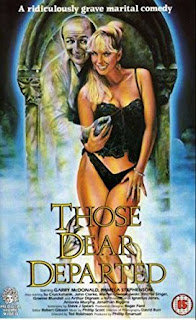 
IMDB says that this obscure Aussie film stated out with the title seen above, though I've also seen a VHS entitled GHOSTS CAN DO IT. Did some enterprising marketer re-title the film so as to take advantage of the 1989 American-made flick GHOSTS CAN'T DO IT? The latter film, while it was roundly panned, at least possessed considerable star power-- that of Bo Derek and Anthony Quinn-- while in the earlier movie, only New Zealand native Pamela Stephenson (SUPERMAN III) was the only cast-member who was somewhat familiar to American audiences. A marketer might have hoped that the Bo Derek film would be enough of a sensation that the Aussie film could coast on that success. As things turned out, the only attention that the Aussie film gained from the name-change was from people putting together concordances of fantasy-films, since those people had to try to keep the two titles distinct from one another.

The two GHOSTS are about equally unfunny, but whereas the Bo Derek train-wreck is just dumb sleaze posing as eroticism, DEPARTED has a curious psychological angle that might have been rewarding given a little more thought.

The aforementioned Stephenson plays Marilyn, who has married a rich actor, Max Falcon, but would like to get rid of him because-- well, eventually you learn that she still loves him, but she's pissed that he hasn't been very attentive lately. Unfortunately for other people in Max's orbit, Marilyn's not a very efficient black widow: she keeps killing everyone but Max. All of Marilyn's victims, being aggrieved about getting bumped off in this manner, congregate in a sort of purgatory, and since they're mostly theater-folk, for them purgatory is a theatrical stage presided over by a nasty producer. These ghosts seem impotent to do anything about their situation until Marilyn finally does off Max. Once he joins their number, they all take on the ability to "haunt" Marilyn and her chauffeur-accomplice, who are the only ones able to see the ghosts. However, the ghosts can't perform any physical acts in the living world. Thus they have to resort to psychological pressure in order to get Marilyn to confess her evil deeds, which in turn will allow the unquiet spirits to move on.

DEPARTED is essentially a love-farce, in which Max and Marilyn eventually confess their mutual feelings, and, like the altered title, even manage to "do it" even though to the eyes of onlookers she seems to be "doing it" all by herself. The script glosses the dysfunctional relationship of Max and Marilyn with the following Freudian tropes:

(1) Max is first seen performing in a play entitled "Freud, the Musical," in which he sings about how he as a child-Freud wanted to kill his father and marry his mother.

(2) Max, after dying, meets his father Gordon in purgatory. However, Gordon isn't hanging around because Marilyn killed him, but because Max did when he was still a child. In the middle of a quarrel between Gordon and his wife Ruth, Little Max "accidentally" leaves his teddy bear out on the floor where Gordon trips on it, thus breaking his neck. Thus it's all but stated that Max did the Freud-musical because in real life he was a subconscious daddy-killer (though Gordon seems pretty mild about the whole patricide thing). The film's flashback even shows Ruth consoling her son and promising to stay with him forever now that Daddy is gone: however, in this flashback "Little Max" is replaced by the adult figure of Max Falcon.

(3) Despite his mother's promise, Max's mother isn't even seen in the bulk of the picture. Max's patricide doesn't keep him from marrying-- but does he marry his mother, as Freud would say he must? Marilyn isn't especially maternal, but with a little psycho-tinkering, one might see her as the obverse of the erotic mother: a punishing mother who seeks to kill Max as he killed his father. It's not a great correlation, but the writer clearly wanted some carry-over, since the murder-weapon, the teddy bear, shows up again. Gordon for some reason wants the bear to help him move out of purgatory, and he even appears before his still-living Ruth looking for the toy, only to be told-- since she can see him-- that he can't have it. The bear then shows up at the conclusion, and proves instrumental to killing off Marilyn, so that she and Marilyn are united in the afterlife.

DEPARTED presents, to say the least, a fairly lame hodgepodge of Freudian tropes, and even though I'm not a Freudian, I've seen much better renditions of his psychology, even in a movie as half-baked as HAUNTED HONEYMOON. I can't actually recommend anyone sitting through THOSE DEAR DEPARTED, but I will say that I wasn't entirely bored by all the chaos.
Posted by Gene Phillips at 3:44 PM
Email ThisBlogThis!Share to TwitterShare to FacebookShare to Pinterest
Labels: the marvelous