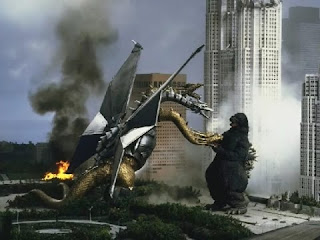 GHIDORAH was the third film in the so-called "Heisei series" of Godzilla films. I commented that the previous film in the series, GODZILLA VS. BIOLLANTE, tried to bite off more than it could chew. GHIDORAH also takes in an awful lot of story-developments, but manages to produce some decent "food-for-thought" nourishment, even if the plotting is a little helter-skelter at times.

GHIDORAH rethinks several key ideas associated with the Godzilla franchise, particularly with respect to the origins of the "King of Monsters." In the original GOJIRA, the monster is a multivalent presence, at times seeming like the incarnation of Japan's traditions, at other times like the forces of modernism that threaten those traditions. Writer-director Kazuki Omori, who also performed both functions on BIOLLANTE, seemed to apprehend this ambivalence. In the original conception, Godzilla was a dinosaur who somehow remained alive beneath the earth until he was both awakened and mutated by an American atom-bomb test. Omori imagines a period, previous to the dino's mutation, in which the creature happened to be awake on a Pacific island during the end years of World War II. A squad of Japanese soldiers have retreated to the island, fleeing the advance of American troops. By chance the bombings disturb the dino, which attacks the American ground troops. This makes it possible for the Japanese soldiers to get away, though the dinosaur is killed by fire from an American ship. Implicitly, the "Godzillasaurus" revives from the dead, rather than from sleep, when its body is irradiated by a bomb-test ten years later.

The film's rather forgettable viewpoint character-- Kenichiro, a science fiction writer-- first learns of this incident from the Japanese field commander, Shindo, now a wealthy businessman. Kenichiro is joined in his investigations by a biology professor and psychic Miki, previously introduced in BIOLLANTE, who has been able to communicate with giant monsters to some degree. The three of them are also brought in as consultants when Japan receives a visit from a UFO, containing three denizens of Earth in the 23rd century.

The "Futurians" inform Japan that the world stands in danger to total destruction because at some point Godzilla will start attacking nuclear plants on a regular basis. Not only will there no longer be a Japan in the future-- although of the three time-travelers, a female named Emi is of Japanese stock-- the rest of the world will suffer devastation as well. The Futurians' solution is to go back in time and prevent the dinosaur's irradiation, so that there will be no Godzilla.

Given how much destruction Japan has suffered from Godzilla's attacks, the modern-day Japanese characters have no problem lending aid to the Futurians (though, to be sure, I was never sure why the time-travelers even needed their aid). The moderns and the Futurians travel back to the Pacific isle in 1944, and witness all the events narrated earlier by Shindo. They even see Commander Shindo salute the courage of the fallen dinosaur, just as if it were a fellow soldier, rather than an animal who aided the Japanese squad by accident. At the right moment, the Futurians teleport the dinosaur's carcass away from the island, tossing it under the ocean waves. (Given what transpires later, one may wonder why they didn't hurl the corpse into an active volcano, just to be sure that it was entirely disposed of.) Unbeknownst to the moderns, the Futurians also leave behind three cute little bio-engineered imps called "Dorats," whose purpose unfolds later.

The Futurian named Emi, due to being exposed to the authentic culture of her ancestors, reveals to Kenichiro's bunch that the mission has been a lie. Future Japan, rather than being destroyed, becomes an economic superpower in the 23rd century, to the extent that all other countries have become subservient to Japan. The Futurians don't make any claims about Future-Japan being a tyranny; they just want all countries to be of equal stature (thus proving that Marxism is still around in their century). The Dorat-imps undergo the mutation that would have happened to Godzilla, and turn into King Ghidorah. For some reason, though Ghidorah is created at the 1954 bomb-test, he waits around almost forty years before attacking 1992 Japan. The country's utter destruction will ensure that it never dominates the future economy, while the elimination of Godzilla from history makes sure that the Big G cannot interfere with the Futurians' plans, if only by accident.

"All we have to do," says Kenichiro, "is blast [the submerged corpse of the Godzillasaurus[ with some radioactivity." But, in one of the movie's weakest plot-developments, the good guys somehow find out that the dino-corpse has been exposed to radioactivity by a sunken nuclear sub at some past point in time. Just like that, Godzilla appears in Tokyo once more, and successfully thrashes King Ghidorah. However, with Ghidorah gone, Godzilla begins another of his many rampages, making it possible that he may do the same thing the Futurians wanted their pawn to do. In a rather confusing turnaround, Emi journeys to the future, and brings back Mecha-Ghidorah, a cyborg composed of the original Ghidorah and various mechanical parts. The battle ends with Godzilla being hurled into the ocean for a "cooling-off" period. Emi departs, leaving open the possibility that Japan will still become the future world's economic overlord.

While I wasn't crazy about the rewriting of Ghidorah's raison d'etre, the film does successfully take the mythos of Godzilla in some interesting new directions. Prior to the successful worldwide  marketing of manga and anime in the 1990s, Godzilla films were one of the few products of Japanese culture that achieved widespread recognition, and so, in a loose way, the success of Godzilla in the 1960s does approximate Japan's later "economic miracle." When the modern Japanese agree to get rid of the Big G. they open the door to a worse menace, and this comes close to stating that Godzilla is essential to Japan's destiny.

Even more interesting is the extension of the martial motifs of the 1954 GOJIRA. In 1944 Commander Shindo salutes the fallen dinosaur, and by so doing, he also implicates Godzilla in the fortunes of his nation. When Shindo expresses regret at having to leave the creature behind, the scene carries the resonance of an officer being forced to leave one of his own men behind. Later, after Godzilla has defeated the original King Ghidorah, he happens upon a massive building belonging to the modern-day Shindo. In a scene echoing Steve Martin's "face-down" with Gojira, Shindo alone remains in his building, exchanging meaningful stares with the giant reptile, Happily, the film doesn't go so far as to claim that the encounter is as meaningful to Godzilla as it is to Shindo, for Big G then destroys the building pitilessly, killing the same man whose life he spared by chance fifty years ago.

Necessarily, future films in the series did not address this modified origin. But if one could hazard that, in some metaphysical way, Godzilla was covalent with a Japanese soldier deserted by his unit, then that would go a long way toward explaining why Godzilla seems obsessed halt the time with raining destruction on "his" native land, and, at other times, determined to protect Japan against any and all enemies.


Posted by Gene Phillips at 3:01 PM
Email ThisBlogThis!Share to TwitterShare to FacebookShare to Pinterest
Labels: combative dramas, the marvelous