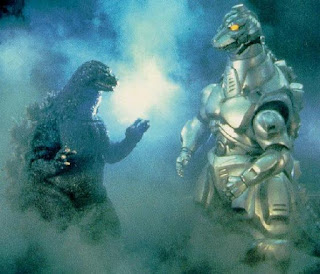 I'm continuing in my eccentric habit of reviewing Godzilla films that weren't even intended to be part of the same continuity, if only for the personal pleasure of having a "G VS. MG II" show up in 1992 before a "G VS MG 1" appears in 2002. Of course, this is mere semantics. "G VS MG II" is in theory a conceptual sequel to Mechagodzilla's first 1974 appearance, known as GODZILLA VS. MECHAGODZILLA in Japan and as GODZILLA VS. THE COSMIC MONSTER in the U.S. Even so, it seems odd for the Japanese to call the 1993 work "second in the series," partly because it's actually Mechagodzilla;s third appearance (following TERROR OF MECHAGODZILLA), partly because the producers of the 1993 film have chosen to give the Big MG a brand-new origin.

Building upon developments in GODZILLA VS, KING GHIDORAH-- though another film, GODZILLA AND MOTHRA, interposed itself between GHIDORAH and the 1993 film-- MECHAGODZILLA II posits that a Japanese self-defense batallion, G-Force, is empowered to dredge up the remains of Mecha King Ghidorah. Mechagodzilla is to be constructed from these remnants, thus establishing that this robot has no connection with the alien-made mechanism from the 1970s.

Time passes, during which the movie's viewpoint character Kazuma is more or less drafted to serve in G-Force, where he's something less than a great fit. Nevertheless, he ends up being part of the crew working with Mechagodzilla, along with the "monster-whispering" psychic Miki, previously introduced in earlier "Heisei era" Godzilla films. To further complicate G-Force's situation, a Japanese research team visits a Pacific island, where they discover a giant egg. No sooner do the humans show up than so do Godzilla and a radically redesigned Rodan (making his first apperance in the Heisei series). The monsters fight over the egg and the team escapes with the egg. Back at G-Force a lady scientist examines the egg, and figures out that it contains a mutated dinosaur of the same species as Godzilla  (so that MECHAGODZILLA II is also a reboot of the "Son of Godzilla" character from the original film-series). Once G-Force knows that the infant in the egg is sending out telepathic broadcasts, they decide that they can use the hatchling to lure Godzilla into the city and then attack him with Mechagodzilla. However, Rodan also shows up for the party, and good havoc is had by all.

Given that I have never liked the classic version of Rodan, whom I considered too cartoony, the Heisei Rodan is a huge improvement. When he fights Godzilla this time, he looks like he has a chance to peck a hole in the Big G's head. The hatchling is also less cutesy than the original Son of Godzilla, and the scenes in which it imprints on the lady scientist is handled without too much false sentiment. However, the plot doesn't accomplish anything beyond getting the monsters together for another battle, and the human characters don't have much heart. And I never figured out why Rodan wanted the egg. Surely, even with the telepathy angle, the pteranodan monster never thought it was its own offspring? Or did he/she just really want to make a monster omelet? 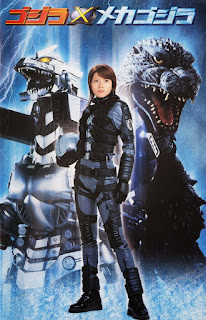 GODZILLA AGAINST MECHAGODZILLA, is the fourth film in the so-called "Millennium series," and it gives the Big G one of his best human opponents, Lt. Ayane Yashiro. The Godzilla films have always been erratic in their creation of strong female characters, but Ayane is almost certainly the best of these.

Ayane, a member of Japan's self-defense force, is called into action when Godzilla makes one of his peripatetic attacks on her country. She and her fellow officers operate a maser-tank, but due to a storm that hits even as Godzilla attacks, her maser-rays fail to slay the monster. Ayane refuses to defend herself for her failure and so she's made a scapegoat for the JSDF's embarrassment. Then someone gets the idea to create a mechanical version of Godzilla to fight the real one. However, whereas the 1993 film chose to cobble its robot out of Mecha King Ghidorah's pieces, the JSDF goes to the source of all Godzillas: the bones of the 1954 monster, still in one piece all these years later and resting on the ocean's bottom after the original was slain by the oxygen destroyer.

Ayane's piloting skills earn her the chance to redeem herself by piloting the new Mechagodzilla, who is here given the proper name "Kiryu." Her fortunes are also improved (sort of) by a possible romantic encounter with maladroit scientist Tokimitsu, who even comes with ready-made family (his precocious daughter Sara). However, when Godzilla returns to Tokyo again, Ayane misses her chance to close with the enemy once more. Once Kirya sees Godzilla, the organic matter in the robot's makeup rebels against human control, and Kiryu begins to ravage Tokyo instead of fighting Godzilla.

However, Tokimitsu manages to submerge the organic instincts of the robot, and finally Ayane manages to square off in her long-delayed combat with Japan's favorite monster. She succeeds where most human-operated devices fail, and drives Godzilla back into the sea, at least for a time.

The 2002 film succeeds best in its exacting view of Ayane's military world, and this in turn resonates with the original GOJIRA's post-war themes. Both Ayane-- again played by the excellent Yumiko Shaku-- and Kiryu return in the next entry, GODZILLA TOKYO S.O.S, but they take something of a back seat to the development of new characters and an involved Mothra subplot.

Posted by Gene Phillips at 3:07 PM
Email ThisBlogThis!Share to TwitterShare to FacebookShare to Pinterest
Labels: combative dramas, the marvelous