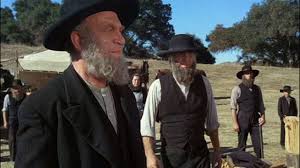 "Is it not good for the body to do the best it can and so give pleasure to you for doing something well?"

"The Hoots" touches on one of the essential elements of the KUNG FU mythos: the opposition between religion's search for peace and the secular world's search for security, usually in the form of monetary acquisition. Caine's particular search is influenced by the practical side of the Taoist ethos: seeking an internal peace but capable of using violence either for self-defense or for the defense of others.

In this episode, Caine falls in with a group of Hutterites-- nicknamed "Hoots" by the people of the town neighboring the Hoots' sheep-ranch. The group's elder, Otto Schultz, is a symbolic father to his fellows, but his faith emphasizes extreme pacifism in the face of all threats. Caine learns that in the past the group has simply moved away whenever they faced any opposition, and that once again the Hutterites are in peril, as local cattle-ranchers seek to run them off their land. A younger Hutterite, Paul Klempt, hopes to reach out to the townsfolk and create a rapprochment, but he's met with callous indifference and assault. However, the willful assault gets the sheriff on the side of the Hoots, so that he begins increasing protection for the religious minority. Naturally, the nasty cattle-ranchers won't give up that easily, and Caine ends up defending the men who won't defend themselves.

In the end, it's made clear that Schultz's extreme refusal of violence wreaks a sort of violence upon his own flock, and that he has over the years become addicted to suffering. The quote above arises when Schultz objects to Caine singing a work-song as he labors on the ranch, for Schultz that it is suffering that ennobles work. Caine makes it clear to the audience, if not all of the Hutterites, that it's more important to live life to its fullest.

"The Elixir" addresses the problem of being caught up in one's desires, even for those who seek to manipulate the desire of others. At the same time Caine arrives in a small town, so does a medicine-show wagon run by two partners: hunchbacked Niebo, who serves as the salesman for a worthless elixit, and beauteous Theodora, who performs an exotic dance in order to entice customers. However, the local louts want to see a few more veils dropped, so Caine intervenes. The sheriff runs them all out of town,

Theodora is the boss of the operation, in large part because Niebo is hopelessly in love with her. The young woman has no compunctions against selling a false elixir made out of river-water and leaves, and explains to Caine that as a woman she must do whatever she can to get ahead in a man's world. In addition, she isn't giving Caine a lift purely out of charity. Theodora has in the past used her beauty to enthrall men, but one of her ex-suitors, Grogan, has been pursuing the wagon for some time. Theodora hopes to draft Caine as a protector.

It's plain that even though Theodora talks a good game about the importance of freedom, she doesn't see it as a two-way street. "She wants only to have her freedom," says Niebo to Caine, "and I only want to be her slave." Although Caine does obligingly defend Theodora from Grogan, he changes her life by making her realize that she has feelings for her assistant that go beyond her own benefit. One of the wisdom-nuggets from the flashback is the admonition to "bind yourself to nothing, seek harmony in all," which sums up the theme of the episode.

"The Gunman" doesn't directly concern itself with the topic of war. But there's a hint of an anti-war sentiment when the title character, a gunfighter named White, states that his "edge" comes from his ability to divorce himself from the violence he wreaks: "I don't see people when I shoot." Once again, with very little justification, Caine becomes involved with White's problems, as the wanted man travels to the home of widow Nedra, who was married to a late friend of White's. White and Nedra begin to fall for one another, but Nedra also has an unwanted suitor hanging around. Caine is not able to prevent the man's death, though his belief in the sanctity of life encourages him to tell White not to kill the scuzzy bounty hunter on his trail. White is so influenced by Caine's ethics that when a posse comes to apprehend him, he "loses his edge," and dies. It's a weak episode, though boosted somewhat by Young Caine's exchange with Master Po. In this, Caine is confused about the idea of love being non-conditional, and Po sardonically comments, "Do you seek love, or barter?"

Posted by Gene Phillips at 4:11 PM
Email ThisBlogThis!Share to TwitterShare to FacebookShare to Pinterest
Labels: combative adventures, the naturalistic