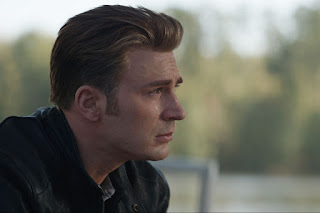 
(SPOILERS OUT THE WAZOO, naturally)

Like the George Lucas STAR WARS films, Kevin Feige's "Phase One" MCU have become such cultural events as to resist criticism, either from the mainstream or from hardcore fans. Nevertheless, I'll give it a try.

The comparison of "Lucas Wars" and "Phase One" also holds with respect to the execution of elaborate plotlines. Audiences remain enthralled with the "New Hope" trilogy, and less than mesmerized with the prequel trilogy that established Who Darth Was and How He Came to Be. Kevin Feige certainly intrigued many viewers with his early hints of a massive story-skein derived from Jim Starlin's "soul gems" concept. But here too the resolution of this plot leaves much to be desired.

Genre fiction walks a tightrope. Move too far in one direction, seeking to give the audience (or internal business interests) what they want, and you fall into the abyss of predictability. Move too far in the other, seeking to present the audience with a sense of novelty, and you risk blundering into the darkness of incomprehensibility. To my knowledge there were no leaks of ENDGAME's script to fans, but nevertheless, many of them guessed pretty much how Feige and his collaborators would seek to resolve the plot set up by the cliffhanger ending of AVENGERS: INFINITY WAR. Feige knew that fans would snatch up all of the "Easter eggs" he left around, and thus there was no real mystery that ENDGAME would have to use time-travel to resolve the cliffhanger, which ends with the evil Thanos obliterating half the living beings in the universe with a snap of his fingers.

I've criticized Feige's MCU for being uninterested in the nuts and bolts of the Marvel fantasy-verse, and sure enough, Feige's idea of time-travel is built not on SF-logic but on jokes to the effect that all previous time-travel movies (TERMINATOR, BACK TO THE FUTURE) are just "bullshit." This spoof is merely Feige's strategy for saying, "Time-travel works however my narrative says it works." TERMINATOR 2 , for instance, gets by with intimating that Skynet can be destroyed in part by constructs originated by Skynet. But this "becoming your own grandfather" paradox is small potatoes, next to having ENDGAME Character A die in the time of her later self, Character B, so that A vanishes from the very timeline that led to B's creation. And this development takes place some time after one of the main characters tells his fellow time-travelers not to risk changing the past by interacting with one's past self.

So the resolution, purely in terms of plotting, falls into the predictability abyss. Yet I have to appreciate how skillfully Feige makes his audience want the predictable. In comic books, major catastrophes are usually reversed quickly, as soon as a group of goodguys like the Avengers can find the way to effect said reversal. Feige, though, has the Avengers fail to undo Thanos's evil deed. For five years every inhabited planet has to deal with the after-effects of cosmic genocide.  Though I've read no reviews at this time, I'm sure that by now several someones have related the first thirty minutes of ENDGAME to 9-11. Of course, the 20th-century "reign of terror" had been building long before 2001, with terrorism taking the place of warfare as a means of asserting hegemony, but ENDGAME is not able to swim in waters that deep, and is content to focus on the Marvel heroes suffering for their "feet of clay." To be sure, Feige doesn't treat all characters with an even hand. The Hulk barely appears in this section, and Thor is reduced to a buffoon. Not much happens to Black Widow either, though this has more to do with her ultimate fate in the movie, while Hawkeye loses his family to the catastrophe and, in reaction, essentially turns into the Punisher. Where Hawkeye loses a family, Iron Man gains one, though by the film's end this equivalence will be overturned, less because Feige is being generous to Hawkeye than because he needs to be rid of Iron Man. Even Captain America, the embodiment of can-do optimism, is reduced to attending "survivor guilt" programs and musing over missed opportunities.

This dirge-like opening functions on another level than making the audience really want the reversal: it's a threnody for Phase One, since by the film's end the Big Four, with whom Feige built his world, must be shuffled off in one way or another, to make room for Phase Two. When the heroes get their act together and start their time-travel quest, ENDGAME is refreshingly free of the tedious overbaked FX-orgies seen in ULTRON and many other MCU films, orgies whose only raison d'etre is to keep the audience from noticing plot-holes. The time-quest section, for all its logic-problems, is the film's best section, recalling the leaner, meaner 2012 AVENGERS.

Once we're back in the present, predictability sets in again: the main good guys struggle for a while against Thanos (who's time-traveled forward to give them another crack at him). The erasure gets erased, the other heroes come back, and evil is banished, though all the people who have returned have still lost five years of their lives. Many of the heroes who return from death will be a big part of Feige's Phase Two, but Feige doesn't allow the new kids to overshadow the sendoff of the Old Guard (with the exception of the new Captain Marvel, who, though merely charmless in her own movie, comes off as terminally insufferable here).

Again, some sendoffs leave something to be desired. I expected little for the Hulk, and got what I expected. Despite Feige's near-total cockup of the Thor franchise, the thunder god does get a few good moments of both action and characterization. Iron Man's fate is telegraphed but adequately handled. The only surprise in the film is the fate of Captain America, which is another one of Feige's "time does whatever I want it to do" schticks but manages to work in terms of his character arc.

I mentioned Black Widow earlier: though not one of the Big Four, Feige sends her off too, though her character-arc isn't executed well, and her franchise-potential is sacrificed on the altar of her old partner Hawkeye, who's already slated to take part in a live-action spinoff series. Feige's plate is certainly already full with proven franchises like Spider-Man, Black Panther and the Guardians, to say nothing of potential interaction with Disney's new Marvel acquisitions. There's a decent big-freaking-battle at the end, not a classic but serviceable, aside from a tedious bit of irrelevant "girl power" virtue signaling.

Despite my many reservations about the Feige-verse, I'm a little sad that the Phase One ride is over, particularly since I'm getting the sense that Phase Two may not have much more to offer but endless virtual signaling. And, of course, jokes. But at least Feige does a better job getting rid of the Old Guard than Disney did with that of STAR WARS.


Posted by Gene Phillips at 2:52 PM
Email ThisBlogThis!Share to TwitterShare to FacebookShare to Pinterest
Labels: combative adventures, the marvelous