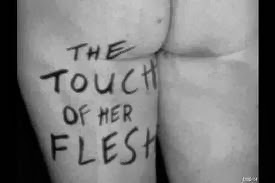 
Many of the critical debates about the sexual representations of mainstream slasher films-- debates like Carol Clover's MEN, WOMEN, AND CHAINSAWS-- were anticipated by the so-called "FLESH trilogy" of the late 1960s.  All three films were directed by sleaze-filmmaker Michael Findlay under the phony name "Julian March," which he also used to play the lead psycho "Richard Jennings."  Similarly, Findlay's wife Roberta assumed at least two stage-names for credits of "music" and "cinematography."  All three of these black-and-white sexploitation-wonders are clearly the result of a small group of filmmakers working on miniscule budgets, shooting on various locations in the New York area.  They could get away with unvarnished sets and inexperienced actors because the Findlays catered not to the Hollywood mainstream but to sexploitation theatres, the kind frequented by the "raincoat crowd."

The later slashers, both from Hollywood and from independent filmmakers, were roundly criticized for being misogynistic.  Even when the killers slew both male and female victims, some critics asserted that the deaths of female victims were given much more emphasis, treated as gory spectacles that played to the misogynist sentiments of male viewers. The argument of "emphasis" may be true, at least in a statistical sense, though later defenders of the slasher subgenre pointed out that many of these films ended with female heroes successfully reversing expectations by killing the killers.

However, most slashers were products of the mainstream mentality, which targeted  both male and female audiences.  The films of the "sleaze circuit" were aimed almost entirely at male viewers.  Going by the logic of slasher-haters, these films should be even more baldly misogynistic, given that no reputable critic reviewed them and they existed outside the strictures of the Motion Picture Code.

Sleaze films of this period were, to be sure, far more daring.  They often deluged the viewer in nude female bodies, and they sometimes depicted a level of violence that went beyond most contemporary horror-films.  Yet some sleaze-films-- like the Findlays' FLESH trilogy--  raise the demons of misogyny in order to exorcise them.  Were one dealing with truly untrammeled misogyny, such demons would reign supreme, and women would have no more chance in such a world than the proverbial hell-bound snowball.

The credit-sequence of the first film, TOUCH OF HER FLESH, sets a precedent that the other two sequels will also follow: superimposing the credits over exhibitions of feminine flesh or some other sleazy spectacle.  Then the film introduces its "starring demon": Richard Jennings, an ordinary looking schmuck.  He's at his house, practicing with his crossbow and hitting a target with deadly accuracy.  However, when he leaves his home, his wife Claudia invites her lover Steve into her marital bed.  To add insult to injury, Claudia tells Steve that Jennings only plays around with his extensive weapons collection because he's compensating for a tiny penis, as well as general sexual incompetence.  Then Jennings returns unexpectedly.  Though he doesn't let the cheating couple know that he's witnessed their flagrant delectability, Jennings wanders away, stunned, until he's hit by a car.  This causes the permanent loss of an eye and a temporary loss of his mobility.  Later, once Jennings regains his ability to walk, the now-insane weapons-collector dons an eyepatch over the damaged eye and embarks on a career as a psycho-killer.

Two elements set TOUCH apart from similar misogyny-fests of the period. Though it's a bare-bones, barely-acted production, the camerawork is reasonably skillful.  Also, Jennings isn't content to merely piss and moan about the evils of women.  Instead, he positively rhapsodizes about their evil, full of purple passion about how he was "trapped in the vortex of the female being."  He doesn't immediately make an attack on Claudia, but warms up by coming up with insidious methods for killing women who routinely tantalize men, like hookers and go-go dancers, and he has a particular mania for turning their own evil against them.  He gives a rose to his first victim, ranting in a monologue-voiceover that "the thorns shall be impregnated with the poison she herself dispenses, and this symbol of her once-virginity shall kill the whore."  Findlay was no Faulkner, but he does seem to have tapped into a familiar trope of American fiction, usually expressed as the "virgin-and-whore dichotomy."

Finally the sicko does get around to killing Claudia with a table-saw, though the camera has to cut away from the scene, probably because the filmmakers had no budget for the necessary gore.  However, Claudia's gal-pal Janet "takes back the penis," as it were, getting hold of Jennings' crossbow and shooting him dead with it-- at least until the box-office reports for this film came in.

Jennings came back, none the worse for wear, in CURSE OF HER FLESH.  The title may be the best realization of Jennings' misogyny, in which the very fruitfulness of female bodies, as well as their excessive lust, is a "curse"upon the male gender.  However, though Jennings still kills various female victims, his main target is Steve, the professional actor whose affair with Claudia sent Jennings around the bend.  As part of an involved plot to corrupt and humiliate Steve, Jennings-- who no longer wears the eye-patch consistently here or in the next film-- becomes the manager of a small-time stage-show, specializing in weird, avant-garde erotic plays.  Steve performs in one of these plays, which sounds like it was scripted by Jennings.  While Steve sits around reciting, naked women dance around him, with dollar bills taped to their genitals.  Steve's rambling discourse babbles about how most people don't have "it," though Steve's character claims that he does have "it," presumably potency.  The notion of Jennings paying stud-Steve to boast about his prowess-- the prowess that Jennings does not have-- lends a masochistic air to Jennings' project.  Then the wonky monologue credits women with having some extraordinary sexuality unavailable to the male of the species, as Steve laments, 'why do the women have "'it" and the men don't?'

Later Jennings, hungry to feed on more female flesh, gets a hooker to take him back to her place, where she keeps her cat, which naturally leads to various "pussy" double entendres from both of them.  Then Jennings starts talking about how "this little pussy is really a primordial carnivorous beast" that "swallows as much meat as it can," which goes a little too far for the hooker.  Jennings poisons her in a roundabout manner, putting poison on the cat's claws and then scratching the woman with the claws, so that she too is symbolically killed by her own sexual nature.

Jennings becomes even more elaborate in his next murder-plot.  He inveigles one of the actresses in his sex-shows so that she offers her services to a lesbian client at the latter's home.  However, since Jennings worships death rather than sex, he gives the actress a dildo that causes the client's death.  Unbelievably, even for this sort of film, the aggrieved actress returns to the theatre, pissed about having been used as a catspaw and wanting money to keep quiet.  Naturally, Jennings kills her as well.  Finally, Jennings maneuvers Steve into dark suspicions about his fiancée, and those suspicions result in Steve killing his girlfriend for the same reason Jennings killed his wife.  Having made Steve over into his own image, Jennings ambushes the actor, who flees and tries to hop a ride in a passing truck.  Jennings catches up with him, and after a wild-and-wooly battle in the back of the truck, the psycho both kills and castrates the actor.

However, chasing down a male victim didn't give Michael Findlay's psychotic "alter ego" as much time to wax poetic about feminine evil.  Indeed, in CURSE Jennings also kills a male cop, though he simply shoots the cop, not bothering to give him any special Sadean death.  KISS OF HER FLESH returns to the basics.  Jennings is still on the loose, this time having fled to the snowy countryside outside New York.  In order to gain a new vantage to attack women, he kills a male doctor, takes over the man's home and pretends to be him. Apparently this area of New York hosts a lot of women who like their doctor to give their sexual massages-- but of course, Jennings once more dispenses death rather than delight, using such devices as a sterno can, an "acid douche," and-- pushing reality more than ever before-- his own "poisoned semen." After killing a female hitchhiker, he sets her corpse on fire amid the snow, and declares that "the snow and the fire will purify your soul."

However, one of his victims has a sister, Maria, who knows about Jennings' twisted career and wants to avenge her sister.  Maria figures out Jennings' modus operandi and makes plans with her boyfriend Don to ambush the killer.  Posing as a patient, she infiltrates Jennings' country-house practice, and stabs him nonfatally before he can kill her.  Don and Maria then give Jennings a taste of his own sadistic medicine.  They tie him to a chair with his own crossbow aimed at him, and the bow's trigger is tied to his penis.  If Jennings gets hard watching Maria make out with Don, he'll jerk himself to death.  However, though the crossbow goes off, the vigilante duo deliberately set it to just miss its victim, since Don and Maria plan to torture Jennings again.  This proves a mistake, for Jennings gets loose and brawls with the two of them.  Still, though the madman comes close to killing them both, in the end studly Don gets the honor of executing Jennings with his own arrows.  The coda asserts that this is "positively the end of Richard Jennings."

What makes this three demented trilogy interesting to a modern critic?  Well, much like the later slashers, these films play to male misogyny, and yet at the same time, characterize misogynists as impotent losers.  At one point, while "Doctor Jennings" is sex-massaging one of his victims, she tells him that she's had sex with "the girl downstairs," prompting the pathetic question from Jennings, "Am I better than the girl downstairs?"  The broad implication is that no matter what Jennings does in retaliation, female sexuality is something both fearsome and awe-inspiring.  CURSE also specifies that women have some formidable power than men don't have.  A Freudian would claim such power can only abide in "the phallus," but Findlay-- who was probably unlearned in all but the most rudimentary Freudianism-- doesn't endow the male organ with power.  It's the female organ that is a devouring vortex, and although a psychotic male can kill many women, the trilogy's conclusion suggests that women like Maria will rise and best the male psycho even in the manly art of murder.  Given that the entire FLESH trilogy was aimed at male viewers, this remains far more subversive than the crude sexual politicizing one finds in a later breed of art-films, particularly the corpus of Pedro Almodovar.  The FLESH trilogy doesn't ever pretend to be art-- and it isn't-- but there's something elemental in these sleazefests, something one will never find in a hundred arthouse-films about the subject of sex.
Posted by Gene Phillips at 2:52 PM

Email ThisBlogThis!Share to TwitterShare to FacebookShare to Pinterest
Labels: bizarre crimes (u), outre outfits skills and devices (u), perilous psychos (u), the uncanny