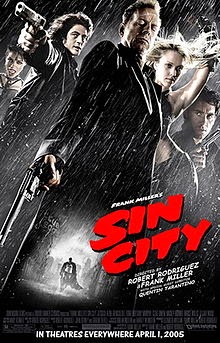 Frank Miller's SIN CITY graphic novels and the films adapted from them prove difficult, though not impossible, to classify.

The difficulty inheres in the fact that Miller's quasi-anthology series takes its primary inspiration from naturalistic sources, such as films noirs and the hardboiled detective genre, particularly as executed by author Mickey Spillane, ostensibly one of Miller's strongest influences.  However, while these works usually take their rigor from the sense that their protagonists exist in a world without miracles, Frank Miller made his mark in comic books with costumed superheroes like Batman and Daredevil. He could have chosen to make his Sin City books entirely naturalistic, but instead he injects moments of the metaphenomenal, usually dealing with uncanny forms of grotesquerie.

The 2005 SIN CITY adapts three of Miller's best graphic novels, adding a new story as a framing-device. The weakest of these is is "The Big Fat Kill," in large part because it spotlights a character who was introduced in an earlier appearance-- the very story that gets the titular focus in the sequel film, "A Dame to Kill For." In "Fat Kill," tough guy Dwight (Clive Owen) falls afoul of a nasty fellow named Jackie-Boy, and despite his attempts to withdraw, Jackie-Boy's nastiness earns him a gory demise at the hands of Dwight's allies, a group of wildly-costumed prostitutes, particularly their ninja-like protector Miho (Devon Aoki). Unfortunately for Dwight, Jackie-Boy turns out to be a cop, and he and the girls must seek to conceal his death from Sin City's constabulary, who will use the scumbag's death as an excuse to shut down the girls' operation. Despite some of the outrageous kung-fu feats of Miho, "Kill" is firmly in the naturalistic vein-- though like the graphic novel, the narrative erects a Jenga-like tower of tumbling coincidences. 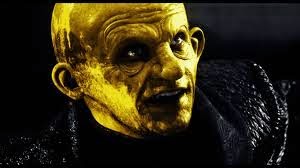 "That Yellow Bastard" is much better, both as original and as adaptation. Sixty-year-old veteran cop Hartigan (Bruce Willis) devotes himself to bringing down a vicious child-rapist, "Junior" (Nick Stahl), who happens to be connected to the Roarks, the wealthiest family in Sin City. Hartigan's reward for saving a young girl named Nancy from rape is that the Roarks frame him and send him away for eight years. He's finally released when he confesses to crimes he didn't commit, but it's a set-up: the Roarks want him to seek out Nancy, who has escaped their clutches. In the eight years of Hartigan's absence, Nancy has become a voluptuous stripper (Jessica Alba), and even while protecting her, Hartigan has to deal with the fact that she's fallen in love with him. Hartigan's primary foe is a freakishly recrudescent form of Junior, whose skin has turned yellow due to the medical treatments that saved his life. Although the duel of Junior and Hartigan is entirely in the vein of the hardboiled dick story, both the makeup and Nick Stahl's performance make the bizarre child-rapist an eerie personage.

I have special feelings about "The Hard Goodbye" as a graphic novel. It was the first of Miller's SIN CITY novels, and it remains Miller's best work in this franchise.  Mickey Rourke plays Marv, a hulking reprobate who spends most of his time sitting around swilling beer in strip-joints-- until he meets a woman who seduces him to serve as her protector. She's killed despite his presence, and Marv goes on a holy crusade to ferret out her killers-- who turn out to be a "weird family" of two homosexual cannibals.  Marv himself is almost a borderline superhero, given that he tears through armed men like the Wolverine and shrugs off being hit by a car. I could see him being uncanny in the same way certain "strongmen" heroes in Italian fantasy-films are uncanny, though the presence of the killer cannibals is the more important factor. Unfortunately, though director Rodriguez adapts the material faithfully, he rushes through some of Miller's best sequences, so that it's no more than an adequate adaptation of the original.  The highlights are the actors' recreations of Miller's outsized characters, with Rourke as Marv and Elijah Wood as the unspeaking cannibal Kevin taking top honors. 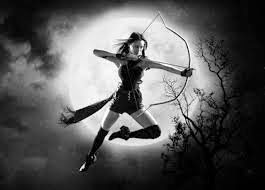 SIN CITY: A DAME TO KILL FOR has some decent moments, but more often than not it too shows Rodriguez in his hurry-up-and-get-it-done mode.  Further, the graphic novel "Dame to Kill For," Miller's second Sin City GN, is also one of his weakest works in the franchise. It's an extremely derivative film noir tale in which Dwight (Josh Brolin) is pulled back into the sphere of his former lover Ava (Eva Green), who pretends that she's being bullied by her rich husband Damian.  It should come as no surprise that Ava merely maneuvers Dwight-- aided by his buddy Marv, prior to Marv's death in "The Hard Goodbye" story-- into killing her husband, so that she can enjoy his wealth and property as she pleases.  But Dwight refuses to just lie down and die, and he marshals other allies to bring Ava down. One of these allies is Miller's Elektra-knockoff Miho, who performs some martial arts feats so fantastic that I'm tempted-- almost-- to deem her as uncanny. But this sequence is entirely naturalistic in its phenomenality.

The same is true of "The Long Bad Night," one of two stories Miller wrote strictly for the film. Yet whereas "Dame" is derivative but coherent, "Bad Night" doesn't hold together. It hinges on the idea that the young gambler-hero Johnny (Joseph Gordon-Levitt)-- the bastard son of Senator Rourke (Powers Boothe)-- decides to throw his life away on a gesture designed to embarrass the powerful father who never acknowledged him. Miller's "big reveal" of Johnny's motivations for entering a poker-game with Roark don't track for a moment-- and even if one buys that he's willing to lose his life to score a point against his nasty daddy, it's hard to believe that he has this in mind when he brings a young waitress into his sphere-- for her association with Johnny spells her doom as much as it does his.

"Nancy's Last Dance" is even less believable.  I don't mind so much that it contradicts the internal continuity of the SIN CITY novels. As long as nothing specifies that Senator Roark is alive and well during the film version of Marv's "Hard Goodbye" rampage, then I can roll with the idea that Marv goes after the Senator prior to these events-- events which, as mentioned before, lead to Marv's death. But I can't buy that Nancy-- mourning the death of Hartigan at the end of "Yellow Bastard"-- suddenly turns herself into a killer archer and joins Marv in taking down the Senator, who's indirectly responsible for her lover's demise.

The only saving grace of this sequence is the return of Bruce Willis as Hartigan. But now he's a ghost, watching all that transpires without being able to help the young woman he loves-- except in one instance. While it would have been a violation of the tone of SIN CITY for a ghost to take direct action in human affairs, Miller figures out a viable way for Hartigan to intervene without violating the franchise's hardboiled aesthetic. Nevertheless, the appearance of a ghost as existentially real moves DAME into the realm of the marvelous.

Unfortunately, there probably won't be any more cinematic forays for SIN CITY, since DAME fizzled big-time at the box office. Though I was lukewarm toward DAME, I still found it preferable to nine-tenths of the predictable genre-work funneled out of Hollywood in recent years. I especially approve of the fact that Rodriguez did not compromise on the copious female nudity throughout "Dame to Kill For," and that actress Eva Green complied with those requirements-- an almost heroic accomplishment at a time when political correctness has come close to banishing the female nude from mainstream cinema.

ADDENDUM: Since writing this review, I've reversed myself in this essay on the question of whether or not Miho is an uncanny presence.
Posted by Gene Phillips at 4:25 PM

Email ThisBlogThis!Share to TwitterShare to FacebookShare to Pinterest
Labels: combative adventures, freakish flesh (u), the uncanny, weird families and societies (u)