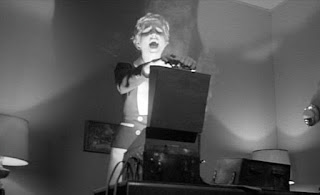 The original 1952 Spillane novel-- which I discussed in a spoiler-filled essay here-- is, by the terminology I've propounded, thoroughly *isophenomenal,* concerning detective Mike Hammer's attempt to find a mysterious box, filled with drugs, which is being sought by minions of the Mafia. The same men killed an innocent woman and almost killed Hammer as well, giving the P.I. the excuse to wreak bloody vengeance upon the criminals. Hammer, despite his sadistic tendencies, is without a doubt the hero of the story. He's also a formidable fighter. Toward the conclusion he's bound and beaten savagely by two thugs, but when he gets free he manages to defeat both men with no more advantage than a moment's surprise.

Both the phenomenality and the heroic tone of the original story are discarded in the 1955 film, whose primary authors-- director Robert Aldrich and scripter A.I. Bezzerides-- were repulsed by Hammer's violence, and perhaps also by his creator's generally reactionary political outlook. Thus while they followed some of the general plot-developments of the novel, they subvert the theme of the original KISS ME DEADLY (subversion being what critics call an unfaithful adaptation when they don't like the work being adapted). Instead of Hammer being a modern knight-errant, enraged at the attempt on his life and the killing of an innocent, the film's private dick is, well, a dick. His detective business is based upon having his secretary Velda make up to married men, and then blackmailing her marks. His motive for pursuing the mystery box-- which Velda terms "the great whatsit"-- is purely pecuniary. Hammer is a thoroughgoing capitalist, hoping to profit by finding the coveted box before the crooks do.

Although Hammer is the lowest of the low here-- using his beefy size to bully potential witnesses, for example-- no one else in the film is much better. For this reason I call the film an "irony" in the terminology provided by Northrop Frye, connoting a type of narrative often characterized by showing
"human life in terms of largely unrelieved bondage and social tyranny." KISS ME DEADLY certainly qualifies. Hammer's police contact Pat Murphy, his best friend in the Spillane novel-series, sometimes views Hammer with thinly veiled contempt, which makes one wonder why Murphy seems solicitous about Hammer in other scenes. Later, when Velda is kidnapped and Hammer wants the officer's help in freeing her, Murphy turns his back on the detective, apparently willing to see the secretary die just so that it will torment the mercenary P.I.

Another interesting change is that Hammer is no longer nearly as tough as the book-version. He does punch out a couple of guys who come at him, but this Hammer only wins one-on-one battles. In the film's latter half Hammer is taken prisoner by two thugs as he is in the book. However, the film devotes a scene to showing Hammer trying to escape the thugs, who promptly beat him down without much effort. In contrast, the film's scene of Hammer's escape-- which contributes to the book-detective's aura of toughness--  takes place in darkness, probably to deprive the film's protagonist from seeming in any way heroic.

The change from a naturalistic to an uncanny phenomenality has less to do with critiquing Hammer than the world in which he lives, for the mystery box contains not the evils of Pandora's Box, but the spectre of nuclear disaster. At one point it's implied that the box simply contains a radioactive isotope stolen from Los Alamos, since Hammer is briefly exposed to the box's contents and receives a radiation burn from it. However, as the above still shows, the box is fully opened by the film's femme fatale Lily, and as a result it not only sets Lily on fire but explodes with destructive fury. No simple isotope could do all of this, but Aldrich and Bezzerides are not concerned with scientific veracity, as is seen in the attempts of the villainous Doctor Soberin to prevent Lily from opening the box:

Dr. Soberin: You have been misnamed, Gabrielle. You should have been called Pandora. She had a curiosity about a box and opened it and let loose all the evil in the world.
Lily: Never mind about the evil. What's in it?
Dr. Soberin: Did you ever hear of Lot's wife?
Lily: No.
Dr. Soberin: No. Well, she was told not to look back. But she disobeyed and she was changed into a pillar of salt.
Lily: Well, I just want to know what it is.
Dr. Soberin: Would you believe me if I told you? Would you be satisfied?
Lily: Maybe.
Dr. Soberin: The head of the Medusa. That's what's in the box. And whoever looks on her will be changed, not into stone, but into brimstone and ashes. Well, of course, you wouldn't believe me. You'd have to see for yourself, wouldn't you?


Soberin mixes together a cocktail of mythological references, but the most resonant one may be Lot's wife. Only the Biblical story from Genesis involves, not just the destruction of a curious woman, but also the annihilation of the corrupt civilization of Sodom, which bears more than a passing resemblance to Hammer's world. I classify the mysterious contents of the box as an "outre device" in that it doesn't precisely violate the causal rules of the naturalistic world, but simply bends those rules to produce an effect akin to the wrath of God. Interestingly, though Aldrich shots scenes showing Hammer and Velda escaping the cataclysm, the original American release simply showed an explosion that implicitly destroyed both the protagonists and antagonists, as if to say, "to hell with them all." Yet, even the scenes in which the couple escapes-- scenes restored in some DVD restorations-- one wonders if Hammer and Velda have really escaped, given their proximity to a miniature nuclear blast.

While many of the script's lines emphasize Hammer's misogyny-- particularly in his opening conversation with the innocent female who dies-- it might be argued that Aldrich's femme fatale is more condescending to women than Spillane's. In both cases, the femme fatale is a woman who has murdered the real Lily in order to assume her identity. But as I note in the essay cited above, the book's Lily is something of a "feminine monster," who horrifies Hammer in being a modern-day version of what Soberin calls "the Medusa." In contrast, there's nothing horrifying about the film's Lily, except that she like Hammer is obsessed with monetary gain, and that her feminine curiosity mirrors that of the culture that has birthed the Bomb. Both are misogynistic portraits, but though Spillane's femme may be monstrous, at least she's a powerful monster.

Posted by Gene Phillips at 3:19 PM

Email ThisBlogThis!Share to TwitterShare to FacebookShare to Pinterest
Labels: outre outfits skills and devices (u), the uncanny