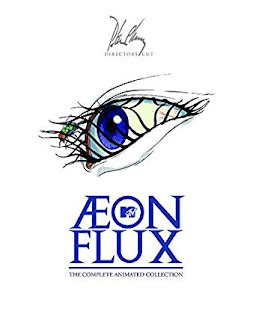 
Of all the mythoi to employ the combative mode, that of the "irony" is the least common. Of the hundreds of films or teleseries collections I've reviewed here since the blog's genesis, AEON FLUX THE COLLECTION is only the sixteenth combative irony.

In my review of the 2005 live-action adaptation of the cartoon, I mentioned that I hadn't seen the cartoons in some time and thus wasn't sure whether they hewed closer to irony or to adventure, although the live-action film was pretty solidly aligned with the latter. However, the summation I wrote of the Aeon Flux cosmos remains accurate:

The original “Aeon Flux” cartoons, produced in the 1990s by Peter Chung for MTV’s “Liquid Television,” became popular with viewers chiefly through their feel of enigmatic unpredictability. The scantily garbed Aeon, an inhabitant of a far-future civilization, engaged in assorted obscure missions, sometimes including assassination, against the forces of city-ruler Trevor Goodchild, sort of a futuristic Nero, albeit rendered with more irony.  On occasion Aeon was “killed,” but came to life by the next episode.

I should note here that only in the first series of "Aeon" cartoons-- ranging from 2-minute to 5-minute episodes-- did the heroine repeatedly perish. Since these shorts were scored but almost totally lacked dialogue, this facet of the heroine's history went unexplained. Then AEON FLUX became a half-hour standalone cartoon show with full dialogue, during which season the possibility of Aeon's having clones was bandied about slightly. However, creator Peter Chung's entire approach to the genre of that SF-genre one might call "future revolution stories" remained consistently elliptical and evasive even when the presence of dialogue gave Chung more opportunity for exposition.

The ten episodes of the half-hour series continually place the leather-clad Aeon in some peculiar situation, toss off a modicum of explanation, and then follow the heroine about in her vaguely defined missions, usually against the forces commanded by Trevor Goodchild. As in many revolutionary stories, villain Goodchild is identified with repressive government, while hero Aeon is lined up, at least in theory, with the forces of liberation. However, Chung may also have borrowed from ironic forms of the espionage genre, since the two sides are often morally ambiguous. Goodchild is often shown to be a scientist in the Frankenstein tradition, seeking to extend the power of humankind to explore new vistas of technology, while Aeon Flux urges caution and restraint. Further contributing to their ambiguity is their past history as lovers, a history that remains in play. Even in the midst of their conflicts, Aeon and Goodchild are occasionally given to embracing and fondling one another. In keeping with the MTV audience of the time, everything in the animated universe has a quasi-sexual vibe, but the sense of the erotic almost always is attended by elements of frustration.

For instance, in one episode Aeon becomes implicated in killing a female enemy agent, and then becomes interested in the dead agent's boyfriend. She pulls the fellow out of trouble, and the two of them sustain a sort of Bogey-and-Bacall badinage during their doomed relationship.

But though couples in this cosmos can get off, no one can get a happy ending, and the short-run series ends on the same ironic tone of non-consummation as when it started.

Parenthetically, in a commentary track Chung addresses the matter of Aeon's skimpy attire. He never says outright that he designed the heroine's clothing to attract "the male gaze," nor does he mention whether or not he received any complaints about Aeon's leathers during the series. He does, however, aver that he avoided giving her many clothes because, in an animated project, the attempt to delineate garments often interferes with what he considered a more important value: that of capturing the expressivity of the human form, in keeping with the priorities of classical art. His explanation is certainly better than most of the lame defenses most artists make for depicting the unclothed female form, and though it may only be a partial truth-- like many of the truths one encounters in an irony-drenched world-- the truth-value has a conditional reality at the very least.
Posted by Gene Phillips at 11:30 AM

Email ThisBlogThis!Share to TwitterShare to FacebookShare to Pinterest
Labels: combative ironies, the marvelous