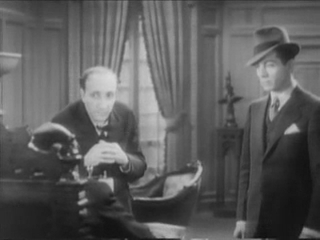 The DICK TRACY strip had been running about six years when Republic Studios launched the first film adaptation of the popular comic.  In those early years Chester Gould’s chisel-jawed police detective usually fought ordinary gangsters.  Such crooks looked ugly or brutal, but they were rarely as freakish as the antagonists of the late 1930s and early 1940s with whom the hero’s mythos became inextricably associated.


This 1937 serial seems to be the first work to pit the hero against a foe of marvelous metaphenenomenality; e.g., a villain, variously called “the Spider” or “the Lame One,” who demonstrates an apocalyptic level of power by destroying a huge suspension bridge with a futuristic “flying wing”—a device later re-used in the Republic serial FIGHTING DEVIL DOGS.  The Lame One also harnesses the talents of a hunchbacked mad scientist with the devilish name of “Moloch,” whose specialty involves operating on honest men to turn them into criminal pawns.

However, the Lame One only displays his world-beater status in the first couple of serial-episodes, after which his criminal forays take a decidedly mundane turn.  The majority of the serial’s episodes are constructed as mundane crime-adventure until the serial reaches the wrapup point, where it veers back into weirdness.


Though the serial couldn’t be expected to duplicate Tracy’s bizarre villains, it doesn’t bother to capture anything of Gould’s hard-nosed character.  This Tracy-- essayed by Ralph Byrd, who would play the character six more times in film and television—is just a standard colorless serial-hero, transformed from a city policeman to a G-man based in San Francisco.  Similarly, his spidery foe is just a typical masked menace, who doesn’t even have a clear raison d’etre but simply sends his goons about on assorted criminal endeavors until Tracy rings down the curtain.  Once or twice the Lame One achieves a slight frisson with his auditory motif—his lame foot makes a dragging sound as he approaches his victims—but he doesn’t have a physical appearance striking enough to rate with the best serial-malefactors.  In truth, his henchman Moloch—gleefully evil as played by John Picoori— is more memorable than the main villain.


There’s a very minor subplot in which Dick Tracy’s brother Gordon—entirely a creation of the serial—is the first to be transformed into a criminal.  But since Tracy never witnesses his brother running around committing crimes until near the serial’s end, there isn’t a lot of emotional impact to the transformation, except when Moloch threatens to wreak the same change on Dick Tracy.


One aspect of the serial strongly resembles the strip: a heavy use of bucolic/baggy-pants humor, as provided by a comic relief detective (Smiley Burnette) and by a crochety old prospector. Neither is likely to seem funny to modern audiences. Fortunately, some later adaptations of Dick Tracy—particularly the 1950-51 teleseries, also starring Byrd—would capture more of the overall tone of the classic comic strip.

Posted by Gene Phillips at 1:35 PM
Email ThisBlogThis!Share to TwitterShare to FacebookShare to Pinterest
Labels: combative adventures, the marvelous