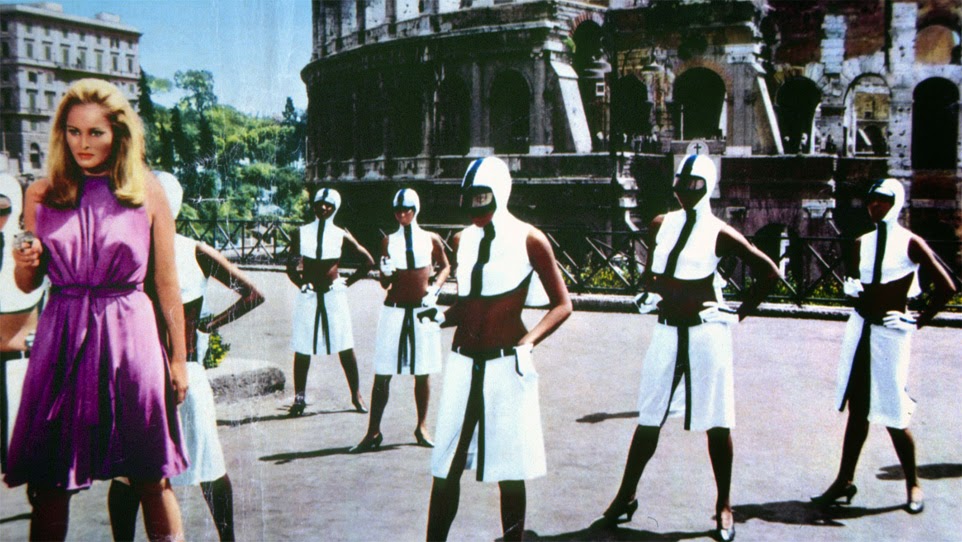 THE TENTH VICTIM is one of the few films that decidedly improves upon its source material.

That source material was a 1953 short-story by Robert Sheckley, "The Seventh Victim." It's probably not the first story to translate the key idea of Richard Connell's "The Most Dangerous Game" into SF-terms, but it's become one of the best-known.

From Sheckley's mordant story about a future where it's legal for people to hunt one another, director Elio Petri and his scripters take the basic setup while casting aside the short story's ironic twist: that after the protagonist falls in love with his intended victim, she reveals that she's tricked him in order to turn the tables and kill him.

This quickie "reveal," while appropriate for a short story or the episode of an anthology-series, was too thin to sustain a commercial film. In addition, love makes the world of commercial films go round, so that here, leads Marcello (Marcello Mastroanni) and Caroline (Ursula Andress) genuinely fall in love with one another.

However, even the validation of love doesn't take anything away from the irony of the overall situation, and in some ways, the survival of one value in a crazy world makes that world seem even crazier.  The romance never detracts from the looniness of this future culture, which seeks to avoid the chaos of war by allowing citizens to sign up to be "hunters" or "victims"-- a status which each entrant must accept equally, in order to obtain a big pay-off.

Similarly, Sheckley's short tale throws in a few shots at the banality of capitalistic marketing, even in the manufacture of murder-weapons. But VICTIM improves on this trope tenfold. For some time, Marcello is uncertain whether or not Caroline is his pre-designated hunter. She, for her part, holds off on revealing her status, having been intrigued by the fact that in all his years he's only married once.  But once they both know the score, they vie to work out their quarrel with the full cooperation of television sponsors.

Happily, Marcello and Caroline don't end up killing one another, though there's enough of a battle at the climax that I rate this a "combative irony."  The coda ends humorously, with Caroline maneuvering Marcello into marrying her-- though it becomes debatable as to whether she was ever really trying to kill him in the earlier scenes.

Posted by Gene Phillips at 3:33 PM
Email ThisBlogThis!Share to TwitterShare to FacebookShare to Pinterest
Labels: combative ironies, the marvelous