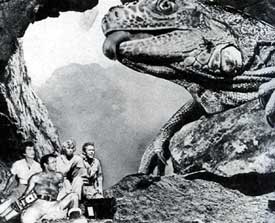 
If the incredibly mediocre KING DINOSAUR boasts any distinction, it's as the first directorial credit for Bert ("Mr. B.I.G.") Gordon. Given that Gordon got somewhat better over the years-- maybe in part because he didn't again work with one of the credited co-scripters, Tom Gries-- maybe one could think of DINOSAUR as the director's version of the crappy comedy-club, where the aspiring comedian can perform without anyone of consequence seeing him get all the "bad" out of his system. (Not that Gordon got rid of all his badness, but still...)

As it happens, DINOSAUR also boasts a "last" distinction. It was filmed under the aegis of Lippert Pictures, a cheapie company that didn't touch any fantasy-content in the forties except for jungle-adventures like QUEEN OF THE AMAZONS. Then Lippert brought out ROCKETSHIP X-M in a quickie attempt to benefit from advance publicity on George Pal's DESTINATION MOON. For a few more years, the company tossed out a few more low-budget sci-fi flicks, with DINOSAUR concluding that trend slightly before the company apparently dissolved. DINOSAUR, in addition to emulating some aspects of ROCKETSHIP X-M, may also have been intended to mooch off an upcoming release, or rather re-release-- that is, *if * the producers knew that RKO's famed KING KONG was scheduled to return to theaters the next year. As all monster-philiacs know well, KONG's re-release in 1952 had already enjoyed box office returns impressive enough to spark the whole "giant monster" craze of the fifties, beginning with 1953's  BEAST FROM 20,000 FATHOMS.

The name of the film certainly evokes the title of the film with the big ape, and in a very loose sense, DINOSAUR emulates KONG's theme of conflict between the modern world and a prehistoric milieu. But the supposed "original story" by producer Al Zimbalist chose to shift the setting from an obscure Earth-island to a planet in outer space-- though the main action does take place on an island on said world. The planet, nicknamed "Nova," conveniently looks like an Earth-bound wilderness, even down to having a human-friendly atmosphere.

Four astronauts-- two males (Ralph and Richard) and two females (Nora and Patricia)-- journey to the newly discovered planet, allegedly with the aim of just scoping things out. Nothing is said about colonizing the world, though that was the dominant mentality of the period. Still, one might almost believe that the four scientists are really interested in pure research, except that the Gordon-Gries-Zimbalist script has zero interest in keeping up the illusion of scientific exploration, not even on the level of Zimbalist's 1953 production CAT WOMEN OF THE MOON. Indeed, the script goes out of its way to dismiss scientific concerns. At one point one of the guys wonders what time it is, and though a lady scientist points out that they don't yet know what the "cycle" here is, the fellow pronounces that he thinks it's about three in the afternoon.

The four explorers aren't really there to analyze the world, but to walk around a lot, goggle at an assortment of beasts, and for each of the two couples to have a little romantic interaction. The four of them are just as deficient in interesting psychology as they are in scientific regimen, and again, even CAT WOMEN does it better. All four are so poorly concocted that I tend to consider the planet itself as the star of the show.

Despite the film's title, there's no particular monster that dominates DINOSAUR. To be sure, Ralph-- or maybe Richard?-- claims that the giant iguana menacing the group is actually a T-Rex, which he dubs "King Dinosaur." This rear-projected behemoth does get more screen time than a giant rear-projected gecko, a giant rear-projected bee, and a normal-sized kinkajou whom the scientists claim to be a "lemur." But the alleged monarch is not really lord of his domain, though he and the gecko are juxtaposed to suggest that they have a big fight a la Kong's battles for prehistoric supremacy. It's the whole domain that the nugatory characters are opposed to, as is shown by the denouement. These supposed scientists, rather than being intrigued at Nova's potential for research, decide that they're grossed out by all these primitive displays of violence, and so they blow up the whole world with a handy atom bomb. To be sure, this slightly resembles the way Ernest Schoedsack returned to Skull Island just to destroy it in SON OF KONG. But I think Gordon and company were probably more influenced by the attitude of military arrogance I pointed out in BEAST FROM 20,000 FATHOMS, which is all about killing the primitive whenever it challenges modern life in any way.


Posted by Gene Phillips at 4:24 PM
Email ThisBlogThis!Share to TwitterShare to FacebookShare to Pinterest
Labels: the marvelous