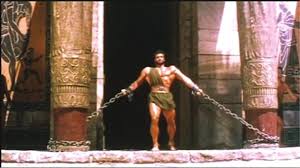 
Though the Italians had already established their own “muscleman film” tradition dating back to the silent cinema years, these two spectacles put the genre of the peplum on the world map as never before. Because so many imitators stemmed from these two films, both starring chisel-chinned Steve Reeves as the Greek demigod, it would be nice to say that one or both were at least small masterpieces of their subgenre. Sadly, only stronger production values really separate the two Reeves films from dozens of bargain-basement Italian adventure-flicks. Just as contemporary superhero films often mix and match elements from disparate comic-book stories, the scripts of the Reeves films jumble together tropes from various unrelated classical myths.

HERCULES has more script-problems than HERCULES UNBOUND, but the first film has better action-scenes and better sexual byplay. After the demigod enjoys a leisurely meet-cute with Greek princess Iole (Sylva Koscina), he goes to work for her father Pelias, little suspecting that Iole’s father murdered his brother to attain the throne of “Julco” (Iolcus). Of course Pelias belongs properly to the story of Jason and the Argonauts, which did involve Hercules as one of the ship’s heroic crewmen. Here, Hercules precedes Jason into the lair of his enemy, who then sends Jason off to seek the Golden Fleece in the hope that the young hero will lose his life. The involved backstory of Jason’s relation to Pelias is passed over quickly, the better not to take the focus off Hercules. The demigod then joins Jason and other heroes on their quest. It’s forgivable that the film doesn’t follow the epic in writing Hercules out of the main story. What’s not redeemable is that the movie drags for a long time, having the Argo’s crew delayed by an ardent Amazon tribe, and then quickly wraps up the quest by fighting a dragon to acquire the fleece. (For the time, the dragon looks pretty good, but he barely interacts with the human actors.) Having produced this dumbed-down version of Jason’s quest, the film somewhat redeems itself at the climax. Hercules and company return to Julco and fight the forces of the evil Pelias, during which scene Reeves performs his most noteworthy feat. Chained to a pair of pillars, Hercules not only pulls down the pillars, he uses the chains hanging from his wrists to lash any soldier fool enough to attack the indomitable demigod. One of the standout anachronisms is that Jason’s crew includes a teenaged version of Ulysses, who, according to the ILIAD, was not born until several generations after Hercules’ life. 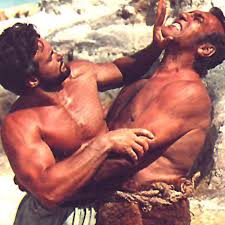 HERCULES UNBOUND takes place a little after the first film, in that now Hercules and Iole are married. Accompanied by Teen Ulysses, the trio set out for Hercules’ traditional home of Thebes, though the hero has been away so long that he still thinks King Oedipus is on the throne. On their way, the travelers are beset by a robber named Antaeus (celebrity wrestler Primo Carnera), and Hercules has a good prolonged struggle with a man who can regain his strength every time he touches the earth.

The film never discusses the scandalous events that caused Oedipus to lose his kingdom—perhaps not wanting to offend officious parents—but at any rate, Oedipus (seen briefly, as if he’s on the brink of either dying or being translated to heaven) has been succeeded by his two sons, who are supposed to alternate their rule of Thebes. Thus the film sets up the main action as a retelling of the “Seven Against Thebes” narrative, with Hercules injected as a possible mediator between the two opposed brothers.


However, the hero accidentally drinks from a river containing “forgetfulness water” (traditionally, a characteristic of an underworld watercourse), and he’s then seduced by a mysterious queen, Omphale. Thouigh traditionally this character is queen of the country of Lydia, the movie-version seems more like a character out of Celtic faery, or from the European stories of "the Venusberg." The latter trope probably influences Omphale’s tendency to preserve her discarded lovers in wax (by one account, the medieval goddess preferred ice). Teen Ulysses justifies his existence by helping Herc restore his memory. Once Hercules fights free of Omphale’s kingdom, the distraught ruler can’t cope with rejection herself, and consigns herself to a vat of hot wax. Hercules and his allies rush back to Thebes, but despite lots of soldiers fighting, and a few Herculean stunts, the two sons of Oedipus kill each other. The film doesn’t trouble itself with laying out the complicated history of Thebes’ next ruler, and contents itself by having a final romantic reunion of Hercules and Iole.

Posted by Gene Phillips at 1:00 PM
Email ThisBlogThis!Share to TwitterShare to FacebookShare to Pinterest
Labels: combative adventures, the marvelous