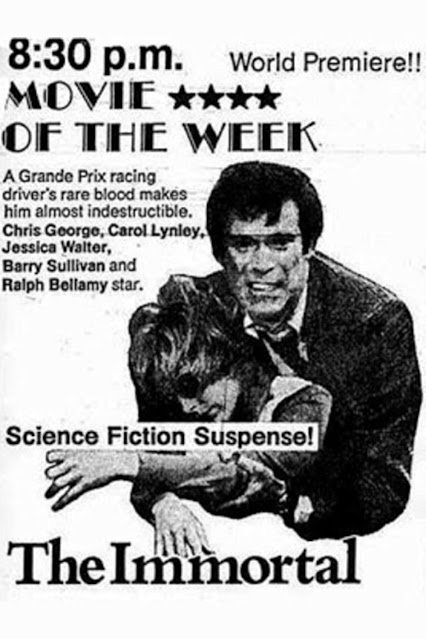 THE IMMORTAL, the series for which this movie was a pilot, was one of the first to imitate the structure of the successful FUGITIVE TV show (1963-67). However, while THE FUGITIVE used its "wandering Samaritan" trope to place its everyman hero in a variety of heavy dramatic situations, many of which involved Richard Kimble sorting out the troubles of the people he encountered while running from the law.

Technically, THE IMMORTAL series sought to follow the same template. For the purpose of this review I did not attempt to re-watch the episodes of the series proper, but going on my fifty-year old memories of this one-season wonder, I don't think the scripts were as heavy on the dramatic elements as those of FUGITIVE. Be that as it may, the pilot film is purely an adventure-flick, dealing with how the hero attempts to avoid being captured by the villain.

Ben Richards (Christopher George) works as a race-car tester in an unnamed city. His boss is a dying old recluse, Jordan Braddock (Barry Sullivan), but Braddock isn't even aware of Richards' existence-- until the rich old man, transported to a local hospital, receives a transplant of Richards' blood donation. Braddock immediately recovers from his injuries and feels invigorated, as if he's actually become younger.

Braddock's doctor (Ralph Bellamy) figures out that Richards is in effect an "immortal," in that the man has never been sick in his life and looks 30 even though he's 43. Richards has never given his fabulous health any thought, though he shares the good news with his girlfriend (Carol Lynley), celebrating that he may be able to keep both of them young for many years to come.

However, the effects of Richards' blood wears off and Braddock is once more a dying old man. So the ruthless plutocrat kidnaps the ordinary joe, planning to keep him as "blooding stock" indefinitely. Richards eventually gets free, and Braddock sends armed men to corral him. When it becomes clear that Richards's girlfriend will be in danger if they meet again, the immortal man goes on the run. For the remainder of the series, he gets into various battles with other corrupt authorities, usually with more of a eye toward spectacle than toward dramatic catharsis. His immortality factor is not exactly a "super power" as such, but in one episode, he astonishes his enemies by quickly recovering from a beating that should have put Richards in the hospital.

The template of the story wasn't entirely derived from FUGITIVE, though, since the proximate inspiration was a series of 1950s stories by James Gunn (not the Marvel director). I read these stories, collected under the title THE IMMORTALS, and don't think the TV people borrowed anything but the basic idea of what rich people would do to corner the market on a "youth potion."

By itself, the pilot film is watchable but lacks any depth whatever, though it does offer the opportunity of seeing a bunch of familiar TV-faces.

Posted by Gene Phillips at 2:30 PM
Email ThisBlogThis!Share to TwitterShare to FacebookShare to Pinterest
Labels: combative adventures, the marvelous