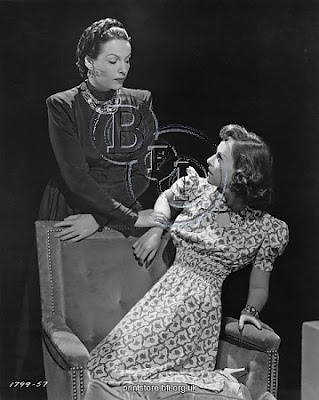 “Have you ever seen a man who looked and acted like a cat? A woman, yes, but a man?”—comic hero Wally Campbell (Bob Hope), CAT AND THE CANARY

In addition to this rumination on gender standards, Hope’s Wally character makes clear, quite early in the film, that the subject matter of the story he inhabits is a mouldy tale indeed: a deceased patriarch, a spooky old house where the heirs must meet to hear the reading of his will, a forbidding housekeeper devoted to the late patriarch, and a fearsome menace stalking the people stuck in the mansion. And in truth even before any cinematic adaptations of the story (this one being the third), the 1922 play was designed to play all of these Gothic tropes for both thrills and laughs.

Gothic novels were known for raising the specters of spiritual presences only to banish them as hoaxes. But although one character (Gale Sondergaard’s housekeeper “Miss Lu”) professes belief in spirits, no one else in the ’39 film worries about ghosts. In deference to 20th-century skepticism, the fearful menace is an escaped maniac who acts like a cat. But the Gothic pattern of “the big reveal” is still observed, as the psycho is revealed to be a scheming relative, out to kill heiress Joyce (Paulette Goddard) so that the bequest will fall to him.

I’ve never read (nor am likely to read) the original play, and prior to seeing the 1939 iteration had only seen one film-adaptation: the 1927 silent film by Paul Leni, which generally gets the highest rating of all the cinematic outings. Without reviewing all of these sources, I can’t be sure what if anything may be original about this version. However, given that director Elliot Nugent’s handling of the material is adequate but prosaic, I suspect that any of the symbolic resonances I’ve seen in this film stem from earlier iterations. A particular disappointment is Nugent’s handling of the archetypal moment when the heiress (or “canary”) is menaced by a beastly cat-claw. Where Leni exaggerates the claw’s proportions and makes the moment sublimely creepy, Nugent’s “claw” is depressingly human-sized.

Regardless, Hope’s line about aligning cats and women is certainly meant to have some resonance. Long before the psychotic “Cat” is said to be on the loose, a real cat (black, of course) is seen flitting around the old dark house, and on occasion the cat seems consubstantial with Miss Lu. In one scene, Miss Lu stands on a staircase overlooking Wally and other characters. The lights go out, come up again, and presto! The black cat has taken the place of the housekeeper. There are no other “witchy” incidents for Miss Lu, though her talk of “a demon” haunting the house makes one wonder if she knows that the real specter here is yet another fortune-seeking bad relative.

There are other odd takes on femininity in the ’39 film. The plot calls for a group of distant cousins to assemble for the reading-- cousins, so that there will be some common reason for them to be named in the will; distant, so that Wally can romance Joyce without raising the specter of incest. In some Gothic tales the passing of a patriarch calls forth his bastard children, but the only time the film accounts for so many distant cousins is when one of the female cousins mentions a “great aunt” who had a big family. In fact, the speaker is scandalized to hear a second woman use the word “prolific”—a word one associates more with animals than humans—only to find out that the second woman is talking about real animals: a throng of crocodiles in the surrounding Louisiana swamp. Still, the idea of a “great aunt” who seems to be the Louisiana equivalent to Diana of the Many Breasts finds its symbolic opposite in Sondergaard’s cat-loving spinster.

Paulette Goddard’s Joyce has her “prolific” aspects too. Though the script implies that most of the cousins haven’t seen much of each other in recent years, two of the male cousins, Fred and Charlie, compete for Joyce’s attentions, as does Wally. At some earlier time Wally deserted Joyce at a dance because she was a “twerp” (read= undeveloped), while Joyce and Charlie apparently had some sort of romantic fling, though they broke up because of some tomcattish behavior from Charlie. Wally redeems himself for his earlier neglect, however, while Charlie, his strongest competitor for Joyce, proves to be the man behind the cat-mask. But neither Wally nor Joyce bells the Cat; Sondergaard, acting in the role of a punishing mother, ends Charlie’s threat by blasting him with a shotgun. (The script tosses out some last-minute conflict between Miss Lu and Charlie, but it doesn't resonate with anything else in the film.) Joyce rewards Miss Lu by giving her the spooky old mansion, after which she and Wally return to the real world.
Posted by Gene Phillips at 3:29 PM
Email ThisBlogThis!Share to TwitterShare to FacebookShare to Pinterest
Labels: perilous psychos (u), phantasmal figurations (u), the uncanny