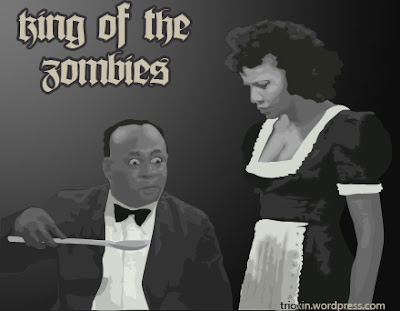 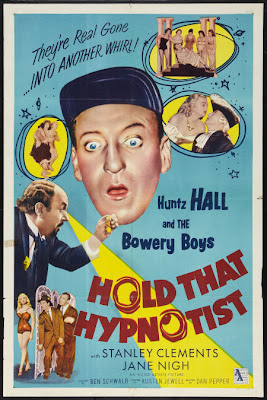 
Previous to this I've only referenced the category "enthralling hypnotism and stage magic" in the case of the kung-fu film JOURNEY OF THE DOOMED, which employed hypnosis as a marginal effect. In these two films, however, mesmerism is the main metaphenomenality.

HOLD THAT HYPNOTIST, one of the last few Bowery Boys programmers, bears a slight distinction in that it actually has a plot, as against most of the serials, which usually hinged on introducing a wild premise and then doing a succession of schtick comedy-bits before wrapping up with a big brawl.

The "Boy" heroes suspect a famed hypnotist, Doctor Noble, of being a con-artist. To their surprise, it appears that Noble is capable of bringing about a state of "hypnotic regression," in that his subject, the goony Sach, finds himself reliving a past life in the days of pirate yore. (The film came out about five years after the notorious "Bridey Murphy" case.) Because Sach seems to have recalled the spot where pirate treasure lies buried, both the Boys and various crooks (including Dr. Noble) are hot to get him to reveal the location. Thus throughout over half the picture, it seems as if HYPNOTIST will fall into the category of "the marvelous," in that it's arguing for the reality of soul transmigration.

However, toward the picture's end Sach realizes that everything he dreamed in a hypnotic state was actually recapitulated from a book of pirate yarns. Nevertheless, although Noble's hypnosis doesn't work on all subjects (he fails with the character "Duke"), the film does exploit the sense of hypnotism as a near-magical influence that Noble and others can wield, so it falls under the category of "the uncanny." (I should note that other uses of hypnotism can fall within the domain of the isophenomenal, as with an earlier Bowery Boys entry, 1955's SPY CHASERS, where the hypno-shenanigans lack the quality I call "strangeness.") The mythic content here is pretty low, aside from how the film spoofs the tendency of regression-patients to imagine themselves having had more romantic former lives-- which I regard as related to Campbell's sociological function.

Far more than HYPNOTIST, KING OF THE ZOMBIES looks as if it intends to be flat-out marvelous. Three American travelers (Mac and Bill, two white guys, and Jeff, played by the black comedian Mantan Moreland) crash-land on a remote Caribbean island. There they are taken to the estate of eccentric Doctor Sangre, whose retinue includes a pretty niece-by-marriage (pretty much just the standard female-lead fodder), a wife who walks around in a trance, and black servants who seem to be zombies.

For roughly half the picture, the film plays with the notion that these zombies may actually be the dead brought back to life, much to the chagrin of Moreland's comic valet. However, in due time it's demonstrated that not only are the zombies not truly the walking dead, they aren't even transformed into zombies by anything as outre as Bela Lugosi's potion from 1932's WHITE ZOMBIE. Instead, Sangre's hypnotic skills convince living men to believe themselves his dead servants, though for some unknown reason the hypnosis works on Bill but not on Jeff, who throws off Sangre's spell amid assorted comic ripostes. Further, although Sangre does conduct a voodoo ceremony with the help of local believers, for him the ceremony is just another device to accomplish his ends, which involve culling information from a captured Naval officer. (As America had not yet entered the war, Nazis are not specifically mentioned though they are implied by Sangre's "Austrian" background.)

The sociological elements of a white man enslaving black victims is not nearly as strong here as in the earlier WHITE ZOMBIE, but in a sense KING forges a new direction in that the character of Jeff is reasonably resourceful despite his frequent "scaredycat" routines.
Posted by Gene Phillips at 1:13 PM
Email ThisBlogThis!Share to TwitterShare to FacebookShare to Pinterest
Labels: enthralling hypnotism and illusionism (u), the uncanny