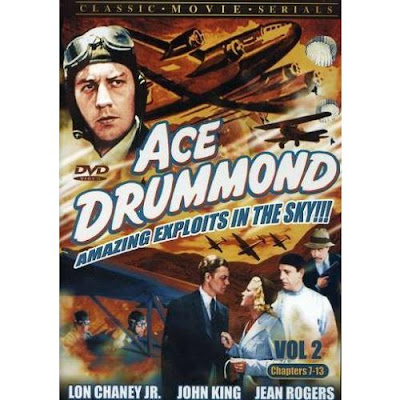 I link these two films simply because both are marginally "science fiction" (ergo, of the "marvelous" phenomenality) due to their inclusion of one of the 1930s favorite gimmicks, the "death ray," used in both films to bring down airplanes. If either film had not used a death ray, however, ACE DRUMMOND would place in my "uncanny" category while Q PLANES placed in the "atypical."

DRUMMOND, directed by both Ford Beebe and Clifford Smith, adapts the short-lived ACE DRUMMOND comic strip of the late 1930s. It's a reasonably efficient adventure-serial, in which Drummond, "G-man of the skies," investigates sinister doings in Mongolia, accompanied by a comic sidekick, a little boy-kid and a young woman looking for her archaeologist father. The scientist has been kidnapped by a mystery mastermind, "The Dragon," who's also developing a death ray with which he can zap airplanes, but the villain's main goal seems to be to force the archaeologist to disclose the location of a fabulous "mountain of jade." (One assumes that building death rays is expensive business.)

Drummond's adventures follow the roughly "sociological" pattern of the period's "soldier-of-fortune" stories, in that at times the American hero must navigate the customs of the Mongolian natives: in fact, the serial's first chapter is entitled "Where East Meets West." However, DRUMMOND doesn't develop interesting from the potential clash of cultures. The most one can say is that if DRUMMOND doesn't capture any of the allure of exotic cultures, as does 1940's THE DRUMS OF FU MANCHU, at least DRUMMOND doesn't go the other way and give us bad Asian stereotypes, as does 1943's BATMAN serial. Admittedly most of the "Asians" are played by Caucasian actors, notably Lon Chaney Jr before he rose to starring status.

Unlike HAWK OF THE WILDERNESS, a serial I rated as "atypical" because it lacked any metaphenomenal content, DRUMMOND does have a couple of "uncanny" devices, as the Dragon springs on the hero a few unusual gas-attacks and, most notably, the Old Room-with-the-Crushing-Walls Trick. But as with the death-ray, these don't occupy a lot of time and most of the action is efficient but mundane. The villain is never seen in costume like some of the more noteworthy serial villains. 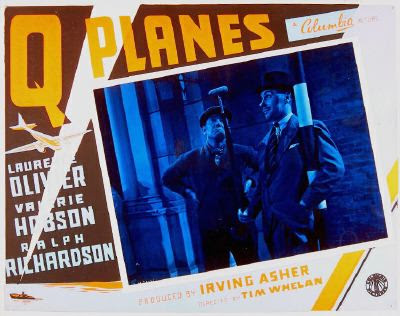 Q PLANES doesn't have any more symbolic content than DRUMMOND, but it's much more fun. Its story opposes three heroes of wartorn Britain (flyer Laurence Olivier, his quarrelsome girlfriend Valerie Hobson, and intelligence investigator Ralph Richardson) against a plot against British air power by a Foreign Power. The enemy spies, who are responsible for using a ray to bring down several British planes, always remain fairly vague, as the Allies hadn't yet declares war on the Axis. Olivier and Richardson, with help from Hobson (Richardson's sister and a suffragette-flavored journalist), ferret out the scheme and take out the schemers.

Q PLANES also has two credited directors, Tim Whelan and Arthur B. Woods, but its 82 minutes are far more exciting than DRUMMOND's whole 13 chapters. I can't say if either director was more responsible for the jaunty, fast-paced approach of the film, but I'd tend to guess Whelan's responsible, as many of the setups feel rather Hawksian. A year or so later Whelan would again work for Alexander Korda as one of the credited directors for THE THIEF OF BAGDAD.


Posted by Gene Phillips at 3:13 PM
Email ThisBlogThis!Share to TwitterShare to FacebookShare to Pinterest
Labels: combative adventures, the marvelous