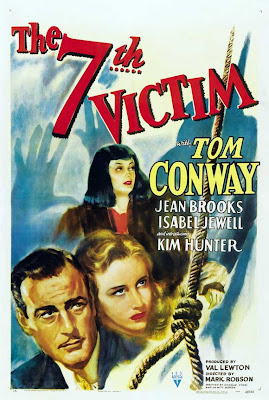 In contrast to the trope "exotic lands and customs," which I explored in WILD WOMEN,  SEVENTH VICTIM is a key example of the trope "weird families and societies." This trope deals with unusual groups that exist within the sphere of "normative" societies, rather than having their own separate, exotically-situated cosmos.

The "weird society" here is a group of Satanists who cause trouble for the "victim" of the title. Satanism, as noted on the commentary track for the movie in the VAL LEWTON COLLECTION, was an unusual subject for 1940s American cinema. Commentator Steve Haberman provides a treasure-trove of information about the film's genesis-- beginning as it did as nothing more than a title suggested by the studio-- as well as covering Val Lewton's general creative processes and those of his collaborators.

All that said, I can't claim that I've ever had any great affection for SEVENTH VICTIM. I can appreciate that it took some admirable chances with both its subject matter and its low-key approach, which, in contrast with 1942'S CAT PEOPLE, did not reap either critical or commercial success. The dour atmosphere strikes me as mannered in all but a few key scenes, and certain characters fail to impress, partly because, as the commentary makes clear, their narrative functions were sometimes changed in rewrite or deleted by studio cutters. Tom Conway's smooth-talking Louis Judd is a case in point. In some scenes he seems to be a professional exploiting his connection with "victim" Jacqueline Gibson (Jean Brooks), as when he talks her estranged husband Gregory Ward (Hugh Beaumont) out of money, ostensibly to help Jacqueline (though we never see her get the money). And yet he receives the standout speech at film's end, upbraiding the Satanists for their follies.

The Satanists are, in keeping with the Lewton approach, extremely low-key villains: they finally do resort to direct violence toward the film's end, though for most of the story they forbid one another from such measures, apparently leery of some unnamed repercussions. Their primary function is to evoke a mood of sombre terror, but the script doesn't dwell on their beliefs with any great rigor.

The story's essential mythic conflict is one relating to the psychological struggle of the viewpoint character Mary Gibson (Kim Hunter) as she tries to find her missing sister Jacqueline within the environs of an alienating big city. She actually gets quite a bit of help considering that she has few resources: first from a detective who volunteers his services even though she can't pay him, and later from Jacqueline's husband Gregory and her acquaintances Judd and failed poet Jason Hoag. Despite this help, it's soon evident that Jacqueline's greatest enemy is not the Satanists stalking her, since they refrain from violence until the end, but her own suicidal urges, which do make Jacqueline the "seventh victim" of the devil-worshippers. (The other six are only referenced in passing to justify the title.)

Mary does gain a measure of independence even though she fails to save her sister from the sister's personal demons. However, when VICTIM is compared with Lewton's earlier films, CAT PEOPLE and I WALKED WITH A ZOMBIE, it's evident that the last thing that the *script* wants to have happen is Jacqueline's salvation. What all three films have in common might be termed the "Jane Eyre Myth," in that all of them feature a woman who finds love with a man with a previous commitment, and in all three films the "previous commitment" ends up taking a dirt nap. VICTIM is the first film which might be interpreted in Freudian terms, since it involves one sister essentially "stealing" her brother-in-law, though conveniently the married relationship has already withered on the vine by the time Mary arrives.

VICTIM is intended to be a very morose, pessimistic film. One wonders if some of that pessimism stems from the fact that the heroine's happiness depends on the death of the sister she seeks to save...
Posted by Gene Phillips at 2:12 PM
Email ThisBlogThis!Share to TwitterShare to FacebookShare to Pinterest
Labels: the uncanny, weird families and societies (u)