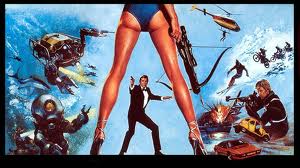 As I did for my essays on the Bond films THUNDERBALL and THE MAN WITH THE GOLDEN GUN, I chose to reread the Bond prose works that most influenced 1981's FOR YOUR EYES ONLY. The film EYES takes its title from one Fleming short-story of that title, about a young woman whom Bond helps in gaining vengeance on her parents' killers, but as it happens the main body of the film is built more around a second short-story, "Risico." In the latter story Bond is sent to Greece to attempt to allay the drug-trade in Great Britain by buying out one of the chief druglords. Since this wouldn't be a very dramatic conflict the hero is dragged into a battle between two Greek-bosses, with a certain amount of double-dealing about which of them is Bond's real enemy.

Both stories, like the film, fall into the phenomenality I call *atypical.* EYES sports none of the freakish villains that often transport Fleming's stories into the realm of the *uncanny,* and there are certainly none of the SF-elements that pushed the movie-series into the realm of the *marvelous,* as was seen in EYES' immediate predecessor, 1979's MOONRAKER. Indeed, the series' producers were very vocal in 1981 about getting Bond away from the more outlandish fantasy of MOONRAKER. EYES, despite some outrageous stunts necessary to sell the cinematic Bond, does that quite well. I found the film far preferable to the later "realistic" take on the Bond franchise seen in the Daniel Craig films CASINO ROYALE (2006) and QUANTUM OF SOLACE (2008), which both lack the earlier franchise's concern with the exotic and the titillating.

EYES' narrative action follows "Risico" fairly closely, but in keeping with giving the movie a more noble sociological motive, here Bond is not attempting to buy off a druglord but to locate a lost codebreaker-device before one of the Greek crime-bosses, name of Kristatos (Julian Glover), can sell the device to the Russians. In fighting Kristatos, whose name slightly suggests "Christ," Bond is aided by a less venal crime-boss named "Columbo,"whose name in Greek means "dove." Neither in the short story nor the movie do there seem to be any conscious religious subtexts to the naming of the two characters, but in the film director John Glen does manage to work in dove-images from time to time, adding a nice visual leitmotif. I can't help wondering if perhaps Hong Kong director John Woo derived some of his fascination with dove-symbolism from the Glen film.

Bond's other major helper is the female lead, Melina Havelock (Carole Bouquet). Although the female avenger in the EYES short story is all-British, the film's screenwriters make the character half-Greek, which allows her to fit in better with the Mediterranean atmosphere, as well as giving her a bit of a Diana-the-Huntress resonance. As a female lead and helpmeet Melina is no more than adequate compared to other Bond Women, and isn't nearly as strong a character as Judy Havelock in the Fleming short story. But at least Melina isn't as much a diminishment of the original as is the film-version of THUNDERBALL's Domino.

The one primary character who's not in either short story is Bibi, a young protege of Kristatos being trained for Olympic skating competition, though it comes out that Kristatos is less interested in her legs than in what lies between them. Presumably Bibi appears because the filmmakers had engaged the services of popular skater Lynn-Holly Johnson, but her character provides some welcome humor when she attempts to seduce James Bond with a sort of Lolita-style aggression. Ironically, the character rejects Kristatos by saying he's too old for her: in truth Julian Glover was over ten years younger than Roger Moore. In addition, Bibi is played to be much younger than the actress actually was, as Johnson was only one year younger than Bouquet.

Moore does "realistic Bond" quite well, with less of the smarmy conceit I found in MAN WITH THE GOLDEN GUN. However, the best thing about EYES are the suspenseful action-sequences. For me the standout is a scene EYES lifts from the novel LIVE AND LET DIE, in which Bond is towed by the villain's boat through shark-filled waters. The film also adds Melina to the ride, adding to the suspense all the more. I suppose this scene registers as more exciting for me than THUNDERBALL's soggy underwater sequences because of improvements in underwater shooting-technology since the 1960s. But this and the end-scenes-- the invasion of Kristatos' mountain fortress-- make EYES the best of John Glen's Bond outings.

ADDENDUM 10-21-19: I've been meaning for some time to change my reading of this film's phenomenality. I originally deemed it "atypical," which term I later changed to "naturalistic," but on reconsideration I decided that the movie's opening scene, in which Bond is menaced by a remote-controlled helicopter, controlled by a Blofeld-like "spectre," does count in the overall diegesis even though the main story seems to be rejecting such uncanny thrills.

Posted by Gene Phillips at 11:35 AM
Email ThisBlogThis!Share to TwitterShare to FacebookShare to Pinterest
Labels: combative adventures, diabolical devices (u), the uncanny