CAPTAIN NEMO AND THE UNDERWATER CITY (1969) 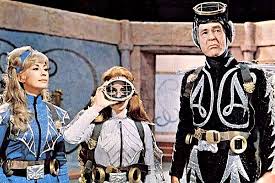 
Considering that CAPTAIN NEMO AND THE UNDERWATER CITY originated from a project that AIP failed to make, this UK production, directed by James Hill, looks damn good. In fact, it looks a lot better than MASTER OF THE WORLD, the film that AIP did make from the works of Verne. Unfortunately, whereas the Richard Matheson script for MASTER firmed up some of the vagueness of Verne's conception of Robut, the script for NEMO doesn't result in a memorable Nemo.

The film follows the lead of many Verne stories: a group of disparate individuals are cast into the elements, only to be rescued by a mysterious mastermind with a miracle vessel, be it an aircraft, submarine, or what have you. In this case passengers traveling on a cargo liner during the Civil War era find themselves adrift, only to be rescued by the Nautilus.  The dominant member of the castaways is American Senator Fraser (Chuck Connors), and he's the first to encounter the submarine's mysterious commander. Nemo, as played by Robert Ryan, is initially saturnine and unresponsive-- a characterization certainly in line with Verne's original. However, throughout the remainder of the film, Ryan's Nemo sometimes shifts into the mode of "genial host" rather than "tyrannical host."

This may have been necessitated by the film's core concept: this version of Nemo, rather than being content to rule over a small coterie of men in his submarine, has somehow constructed a sub-sea city, inhabited by a larger society of people who don't mind living beneath the waves. (Nemo's selection process for the inhabitants of his city "Templemir" are not clarified.) However, despite his moments of relative friendliness to the newcomers, he remains opposed to them in that he does not trust the surface people, and will not allow any of them to go home.

Verne clearly liked the idea of pitting a group of freedom-seekers against a tyrant, however benevolent, who wished to keep them prisoner. NEMO's script goes so far as to make two of the castaways unlikable, and one of them even dies as a result of his own blundering attempt to win free. The underwater city offers many pleasures-- though, ironically, its streets are paved with gold that has no value in Templemir's society.  Fraser finds romance with a female Templemirian named Mala, and this in turn irks one of the locals who desires her as well. Yet it's Fraser who is motivated by a duty to return to the surface world and fulfill his professional commitments, leading to a scenario of self-sacrifice.

The film, in addition to being well-designed, rivals the famed Disney film in its depiction of undersea wonders. Its greatest narrative problem is that because Nemo is basically benevolent, there's not much tension in the opposition between him and the would-be escapees. The introduction of a monstrous manta ray, mutated by Templemir's intrusion upon the deeps, might have presented the good captain with his own "Moby Dick." Yet the manta ray is killed off prior to Fraser's escape attempt, and basically has no real impact on the narrative tension.

CAPTAIN NEMO AND THE UNDERWATER CITY is thus watchable but not overly exciting. I give the film a "fair" rating in terms of mythicity simply for the ingenuity of making the insular Nemo a sort of "King Neptune" with his own private "city beneath the sea."


Posted by Gene Phillips at 3:47 PM
Email ThisBlogThis!Share to TwitterShare to FacebookShare to Pinterest
Labels: the marvelous