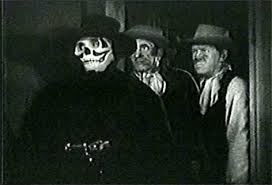 No outre devices this time, just "outre outfits" for the first film and "outre skills" for the second.

DEADWOOD DICK, a 1940 serial directed by James W. Horne, is one of those "masked cowboy" films that I consider to be no less metaphenomenal than, say, "mystery-horror" films in which masked killers lurk about old dark houses. This time out the titular hero-- who takes his name from a dime novel hero, one who, to my knowledge, did not wear a mask-- is opposed to yet another fellow in a mask. In a visual sense the villainous Skull actually puts to shame the bandanna-over-the-face cowpoke hero. However, aside from his cool mask, the Skull is a routine western type, out to terrorize the Dakota territories so that they won't achieve statehood-- a fairly common trope in western serials.

Like most James Horne serials, this one is fairly lively, with a more knockabout fighting-style than one gets from the Republic serials. The hero is played by one Don Douglas, who at least is not a standard square-jawed heroic type. However, he's still rather colorless, except in one scene. It's established, through conversation with a confidante, that in earlier years newspaper Dick Stanley has assumed the masked guise of "Deadwood Dick," though it's not clear why he started his double identity or why he retired it. Stanley is slightly reluctant to become a vigilante again, and he even gets blamed slightly for not going into action when the Skull's men cause the death of Wild Bill Hickock. Once Stanley decides to become a hero again, he embraces the job fully, but the suggestion of "guilt through neglect' makes interesting comparison with the GREEN HORNET serial, which also appeared in 1940 but presumably derived from the earlier radio-series. 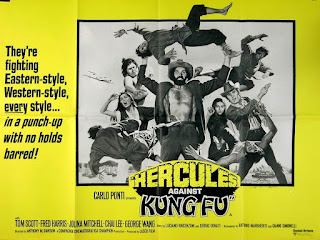 Though DEADWOOD DICK is a fairly ordinary adventure, it's like a masterpiece next to the incredibly cheesy Antonio Margheriti flick, MR. HERCULES AGAINST KARATE.  I presume that the film came about because some producer observed the popularity of 1970's THEY CALL ME TRINITY and decided to create his own version of that films slapstick fighting-team. To my knowledge neither this film's Big Stolid Brute (name of Percy, and never called "Mr. Hercules" in the English language version) nor its Clever Handsome Charmer (name of Danny) ever made another appearance.

The plot is exceptionally stupid: the two buddies are laid off their job, in part because Percy's immense strength keeps causing catastrophes. They're offered a new job by a Chinese businessman. His wife was stolen from him by a rival who runs a martial-arts dojo, and the wife took his son with her. To retrieve the boy, Percy and Danny brave the dojo and manage to outfight dozens of strangely incompetent martial artists.

The film's only relevance to my project is that though there's no narrative explanation for Percy's great strength, he's seen pulling off feats that are completely beyond the abilities of any real muscleman. At the end, he even stops a plane from taking off! But the vibe I get from the film as a whole is more uncanny than marvelous, so I have to judge that the filmmakers were simply following in the footsteps of other, "uncanny-centered" films of Italy's peplum era, like the two non-marvelous Hercules films I reviewed in this essay.