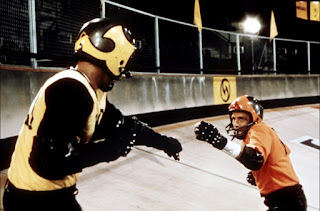 
The original ROLLERBALL was the first of director Norman Jewison's very rare metaphenomenal films, and like many science-fiction flicks of the time, this one depicted the future in terms that would make audiences dread to face the next day, if they actually believed the future would turn so badly. I suspect that only the prospect of turning out a meditative critique of society lured Jewison to a project so unlike anything he'd directed before.

Scripted by William Neal Harrison from his own short story (which I have not read), ROLLERBALL follows the general example of Orwell's 1984, positing a near-total takeover of all government entities by a corporate state. Most citizens seem OK with the change, and any instinct toward rebellion seems to have been almost totally quelled by the various corporations' implementation of the game of "Rollerball." The sport is essentially a much more violent version of roller derby, with the addition of motorcycle-riding combatants to the derby-ring, and the foremost practitioner of Rollerball is Jonathan E. (James Caan), who plays for a corporation based in Houston.

The idea that a fascist state might control the masses by offering them "bread and circuses" in the form of blood-sports was nothing new. A very campy adaptation of Robert Sheckley's "The Seventh Victim" had appeared in 1965, but the Jewison-Harrison film takes a much more dour vision of its Orwellian future-- though allowing for a bit more hope than 1984.

Like countless fictional Roman gladiators, Jonathan E. becomes exceedingly popular with the audiences watching Rollerball-- so much so that he becomes for them a symbol of resistance to the powers that be. The corporations had intended audiences to come to the exact opposite conclusion-- that the team-focused endeavors of the players would actually discourage individual initiative on the part of the viewers. But Jonathan's superior talent, as well as his selfless devotion to his team, soon shows the corporate reps the error of their ways.

Again, like the fictional gladiators, Jonathan cannot be simply disposed of. One of Jonathan's corporate bosses encourages Jonathan to retire for the benefit of the companies, but the player doesn't want to leave his team. The corporations are much less given to random violence than those dominating the worldscape of Orwell-- long sections of the film deal with Jonathan simply mulling over his owners' demands-- but by the climax, the overlords have decided to eliminate all resistance by upping its potential for bloodsport.

There are some decent lines in ROLLERBALL's script, mostly dealing, very seriously, with the character's unwillingness to sacrifice his soul on the altar of convenience and comfort. Still, Jonathan is rather underwritten and doesn't generate much charisma when he's not battling in the ring, and despite some decent insights, the project doesn't gell nearly as well as other SF films about the demands of the "sporting life"-- not least my personal favorite THE BLOOD OF HEROES.

The ending is moderately ambiguous but not especially compelling.

Posted by Gene Phillips at 2:42 PM
Email ThisBlogThis!Share to TwitterShare to FacebookShare to Pinterest
Labels: combative dramas, the marvelous