CHARLIE CHAN AND THE CURSE OF THE DRAGON QUEEN (1981) 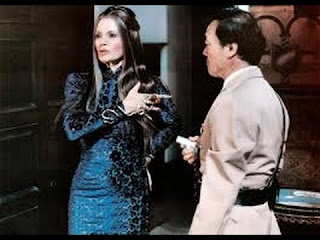 
I've noted that a fair number of the Charlie Chan films qualify as metaphenomenal works. Some reference-works have no problem citing Chan films with pretend ghosts and the like, but to my knowledge no chronicler has devised anything like my criterion of the "bizarre crimes" trope, to cover things like weird methods of killing people. I alluded to one such method in the 1945 film THE JADE MASK, and this 1980s comic re-creation of the Chan mythos seems to have chosen to pursue the same trope. Charlie (Peter Ustinov), now in his grandfather-years. is brought out of retirement to find a serial murderer, and it's indicative of the script's lack of imagination that the best name it can come up with for the criminal is something like the "bizarre murders killer." (I confess that I can't stand to watch the film again to get the exact term, or to recall exactly what bizarre murders were committed.)


Many of the original Chan films of the sound era have some interesting sociological themes despite their status as light entertainment. At the very least the films were good about showing an Asian protagonist in a generally favorable light, and even if Chan wasn't played by an Asian in the sound era, at least the films did offer regular employment to a handful of Asian actors in supporting roles.
However, DRAGON barely has any Asians in its big-name cast, with Richard Hatch playing a half-Asian grandson of Chan and Angie Dickinson as the titular "Dragon Queen."


The comedy in DRAGON is pretty predictable and generally unfunny, but the script-- originated by producer Jerry Sherlock (his only writing credit on IMDB)-- offers one puzzling conundrum: the Dragon Queen herself. She's a Caucasian woman who's a member of the American "upper crust" of the 1940s, and a murderess whom Chan sends to prison. Yet she's called "the Dragon Queen" after she curses Chan, and at one point she dresses a little like the famous "Dragon Lady," the Eurasian temptress of Milt Caniff's comic strip TERRY AND THE PIRATES. Later in the rambling story, when she's suspected of the murders, she assumes the outfit of a Chinese coolie for reasons that go unexplained. Did Sherlock have some dim idea of bringing together two famous Asian archetypes, Chan and a road-company version of the Dragon Lady? This puzzle, unlike the central mystery of the film, will likely never be solved.


Clive Donner's direction is so slack and pedestrian that it makes his THIEF OF BAGDAD look like a classic by comparison.  I could imagine this film originating when some producer heard Peter Ustinov do a dead-on re-creation of Warner Oland's version of the Oriental detective, resulting in the producer's decision to build a comedy film around Ustinov's imitation. The only virtue of DRAGON, in addition to Ustinov's superior mimicry, is that the Chan character generally keeps his dignity, apart from one or two minor pratfalls. That's more than one can say for another 1980s comic take on a famous Asian archetype, THE FIENDISH PLOT OF DR. FU MANCHU-- which was far more painful to watch than DRAGON.

Posted by Gene Phillips at 2:04 PM
Email ThisBlogThis!Share to TwitterShare to FacebookShare to Pinterest
Labels: bizarre crimes (u), the uncanny