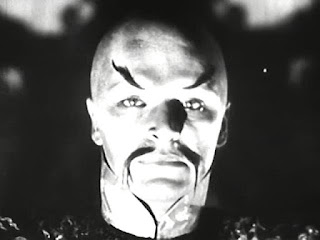 
There's often an adversarial relationship between works of prose and works of the cinema. Prose is of course the older medium, and it's far more the case that films are adapted from prose works than the other way around. But films often change the works they adapt, sometimes to meet the nature of cinematic storytelling, sometimes just because some filmmaker wants to tell his own story while tying it into a "presold property." Multi-chapter serials were particularly notable for this, as witness 1941's JUNGLE GIRL, which derived nothing but a title from the Edgar Rice Burroughs novel on which it was supposedly based.

DRUMS OF FU MANCHU, directed by William Witney and John English, uses the title of the 1939 Sax Rohmer novel. However, the serial's basic plot-- in which the Asian villain seeks to gain control of diverse Asian tribes by finding a rare artifact-- derives from both Rohmer's 1932 THE MASK OF FU MANCHU, as well as a (very loose) film-adaptation with the same title and in the same year.

Perhaps because Fu Manchu had not appeared in a live-action film since 1932, the serial-makers felt it necessary to remind audiences of his literary provenance with a prologue that reads, in part: "From the pages of fiction steps the most sinister figure of all time-- Fu Manchu! Schooled in the ancient mysteries of the Orient, he is as modern as tomorrow!" Rohmer's character in fact kept his feet planted in both worlds. The Oriental mastermind's main modus operandi consisted of committing thefts and assassinations with skillful assassins or with the use of artful devices involving poisonous creatures, all very "low-tech." Yet at times Rohmer's Fu also dabbles in science-fiction weapons like reanimated dead men and a handheld disintegrator ray. The six scriptwriters assigned to DRUMS wisely chose to dispense with overt SF-weapons, so that all of this Fu's weapons are of the "uncanny" phenomenality, though a couple of them-- which I'll discuss in closing remarks-- strain the definition.

As in Rohmer's MASK novel, Fu's mission is "the conquest of Asia," and here the master plotter must do so by unearthing the Scepter of Genghis Khan, concealed in the (still unknown as of this date) tomb of the Mongolian leader. Fu finds out that various Western archaeologists have pieced together clues as to the tomb's location, and he seeks to find the tomb, implicitly somewhere in Mongolia, so that he can gain control of the resentful tribes-- which, given the boogieman status of the Mongol hordes, is apparently covalent with gaining control of all Asia. Aside from one major firearms-battle in the final chapter, Fu almost always seeks to conquer Asia using archaic weapons like knives, strangling-cords, and poisonous creatures, all wielded by the villain's vicious, slavish dacoits. Though Witney and English, like Sax Rohmer, generally support the rightness of British colonialism, Fu can't help but seem admirable for taking on the superior forces of Caucasian Europe with primitive weaponry. One chapter of the serial even directly adapts Rohmer's device of the "Seven Gates," a series of wooden gates that bring starving rats closer and closer to Fu's intended torture-victim.

DRUMS provides audiences with the closest cinematic match to Rohmer's villain. Fu Manchu is easily the intellectual superior of all of his antagonists, a master of chemistry and a skilled surgeon (he makes his dacoits subject to his will via an operation that sounds somewhat like a lobotomy, except that it leaves them with fang-like teeth.) He's also a master of hypnotism and the arts of disguise, and he receives feminine assistance from his cunning daughter Fah Lo Suee-- though she's perhaps a little more servile than she is in the books. As essayed by the masterful Henry Brandon, Fu has a sardonic sense of humor absent from most other cinematic productions, as well as his own code of honor, despite his penchant for murder and torture. One scene even allows him to display grief when his daughter is gravely wounded. displaying a level of emotion not seen in other adaptations of the character.

The other players acquit themselves well. William Royle makes for an unusually heavyset version of Nayland Smith, agent of the British Empire and Fu's eternal enemy. Most of the hand-to-hand fights are handled by a younger character, Allan Parker, who much resembles some of the "stalwart young heroes" of Rohmer's books, though actor Robert Kellard gives Parker a greater vim and vigor than the average square-jawed hero. The character of Doctor Petrie, who functions in the books to narrate Nayland Smith's exploits, obviously doesn't have a lot of relevance to this project, but it's pleasant to see him included for a few chapters, and there's even an eccentric collector of artifacts who's probably patterned after Rohmer's "Lionel Barton" character. The two female characters, Fah Lo Suee and Mary Randolph, aren't given much to do overall, but the serial gains some gravitas from short-term participation by actors like Dwight Frye and Philip Ahn.

In terms of the serial's greatest asset-- the action-- I'd say that DRUMS is the FURY ROAD of its day. Many serials just coast on repetitive fight-scenes broken up by talking-heads of the heroes discussing their next plans. But although DRUMS has its share of talking-head scenes, Witney and English manage to make even these compelling, possibly because the plot has a sense of sustained progress from one point to another, a sense of progress many serials lack. Dominantly, the heroes and villains are seen doing exciting things: fighting, running, jumping, riding horses, scaling telephone poles. DRUMS also benefits from cliffhangers with some logical payoff, as when Fu Manchu trap-doors Allan Parker into a tank with a predatory octopus!

Witney and English also structure the story to resemble Rohmer's stories in mixing elements of both mysteries and horror-tales, making greater use of shadowy or exotic locales than most serials are wont to do. One particular exotic locale, an isolated temple in Mongolia is the source of one of those "verges-on-the-marvelous" phenomena. The temple falls under Fu's aegis, and it just happens to possess a unique method of executing infidels: a great crystal that can focus the sun's rays so as to incinerate anyone placed in the path of the rays. It's almost needless to say that there's no real crystal that can perform this laser-like function. And yet, since the crystal isn't presented as being an artifact from some super-scientific civilization, like a similar item in LOST CITY OF THE JUNGLE, I have to regard it as an "outre device" that operates the way it does just because the story says that's how it works/ It's just an arbitrary rule of the game, sort of like Fu using hypnosis to instantly enthrall people into subjection.

But the outstanding "outre skill" used by Fu Manchu here is like nothing seen in the novels. In many episodes Fu Manchu's approach is heralded by drumbeats, and for most of the serial, the audience would probably assume that some of his minions are nearby, beating drums for their master. Indeed, there are comparable scenes in one or two Rohmer books. But only in Chapter 10 does it become evident that-- Fu Manchu himself makes the drum-sounds! He's only seen doing so once: Parker and Smith are in a cavern whose stalactites are poised to fall at any loud sound, and Fu, off to one side, begins emitting drumbeat-sounds from his very skull, so that the stalactites fall and nearly kill the heroes! It is, in my educated opinion, the single most delirious episode in the history of American serials. There's no explanation as to how Fu can make such a sound, and though I've played with the idea that he's somehow amplifying his own heartbeats, the truth is that it happens just it looks awesome. It's a scene that makes the audience feel as if, for a moment, they're trapped inside the skull of that supreme enemy of all things Western: the insidious Doctor Fu Manchu.

Posted by Gene Phillips at 2:33 PM
Email ThisBlogThis!Share to TwitterShare to FacebookShare to Pinterest
Labels: bizarre crimes (u), combative adventures, diabolical devices (u), exotic lands and customs (u), freakish flesh (u), the uncanny, weird families and societies (u)