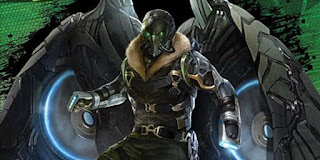 I see that I was incorrect when I made the following statement in my review of last year's CAPTAIN AMERICA: CIVIL WAR:

The newest iteration of Spider-Man—“on loan” to Marvel Studios from Sony—is more of a mixed bag. The costume and the webbing look good, and after the last two movie-versions, it’s pleasant to see a wall-crawler who continually cracks wise. However, the rest of the hero’s characterization is extremely shallow—which is understandable, in that Marvel Studios have no motive to do anything more with the character than was strictly necessary for their movie’s plot.

I've seen it bruited about that HOMECOMING's concept of Spider-Man is partly indebted to the 2000-2009 series ULTIMATE SPIDER-MAN. I read only one collection of these comics, and so I can't speak as to whether HOMECOMING borrowed any specific tropes or ideas, though the comic-series' simplistic rewriting of the Lee-Ditko character seems to resonate at about the same level of mythicity as HOMECOMING. But in a strange bit of hubris, the producers behind the MCU seem to have thought that the proper way to pay respect to the character most associated with the Marvel Brand was to tie him to the mythos of the cinematic Iron Man-- which, of course, is the bedrock on which the MCU stands.

Happily, since two of the three Sam Raimi spider-flicks gave viewers a more than exemplary adaptation of the Lee-Ditko SPIDER-MAN, there's nothing wrong with the MCU doing their "Ultimate S-M crossed with Iron Man" concept of the character. HOMECOMING is a fairly entertaining film, filled to the brim with the trademark Marvel Studios humor, and with loads of eye-popping FX, including a technological upgrade for "The Vulture," an Old Favorite among the ranks of the Lee-and-Ditko rogues' gallery. So it's not a bad film, like AGE OF ULTRON, it's just a little under-ambitious.

Tom Holland is the new Peter Parker, and happily, there is no attempt to retell the iconic origin-story of How He Got Spider-Powers. Though he's aged 21, Holland plays a believable 15-year-old high-schooler, which plays into the central idea of this Spidey as a kid who's Got a Lot to Learn. The events of CIVIL WAR appeared to bring this Parker into Tony Stark's orbit purely to make the wall-crawler into another weapon against Captain America's forces. However, HOMECOMING informs viewers that Stark now sees his relationship to Parker as one of mentor to student, possibly even as father to son (Stark's storied difficulties with his old man are front-and-center here). To cement this new bond, Stark doesn't just give Parker a suit that can do "whatever a spider can:" he gives him a suit that can do almost everything that Iron Man can-- which, for my money, results in making the Spidey-mythos unnecessarily dependent on the Iron-mythos. In addition, if there was any area where the film's humor was more overabundant, it was with respect to jokes about Spidey's difficulties with the suit's capabilities. (The schtick involving an "enhanced interrogation" function was probably the low point.)

Parker's old cast of characters has of course been updated, many with the idea of emphasizing "diversity." However, few of the updates have any substance. The revision of the Vulture is the one exception. Originally just a thief who used artificial wings to commit robberies, this Vulture (Michael Keaton) is a discontented middle-class guy who gets ahold of alien tech and begins using it to sell illegal weapons to career criminals. (The script dances away from any implication that he might also sell to terrorists: apparently this Vulture restricts his clientele to American crooks.) Alien tech makes the Vulture a much more powerful menace than he ever was in the comics, and Keaton delivers an intense performance that counterpoints Holland's softer, more tentative character.

Most of the thrill-ride doesn't have much symbolic significance, but I did find one interesting trope. The first few Spider-Man stories by Lee and Ditko give the hero both a "good father" (saintly Uncle Ben, killed by Parker's act of omission) and a "bad father" (J. Jonah Jameson, who wields economic power over Parker and constantly kvetches about the activities of Spider-Man). HOMECOMING does not bring in Jameson at all, while poor Uncle Ben is only briefly mentioned. Yet, in a fitting turnabout, the web-slinger is still haunted by dueling fathers. True, middle-aged "Bad Dad" Vulture wants to kill Spidey rather than just berate him, but in a nice turn, the villain is also implicated in the life of Parker's support-cast. Tony Stark is more or less the Good Dad, for all that he's not there for Parker a lot of the time. I suspect that this mirroring, though, was mostly dumb luck rather than good planning.


Posted by Gene Phillips at 2:34 PM
Email ThisBlogThis!Share to TwitterShare to FacebookShare to Pinterest
Labels: combative adventures, the marvelous