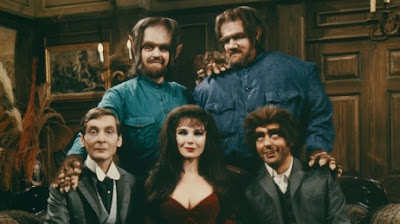 Though I've not seen all of the eleven CARRY ON films prior to SCREAMING, I've the impression that this film is a little more rigorously plotted than most flicks in the franchise. If so, this may be because the producers were trying to hew to the model of "old dark house" horror-films rather than just sticking to the looser setups for British vaudeville gags.

Usually the main stars of each CARRY ON film belong to an ongoing ensemble of comedians, including Jim Dale, Joan Sims, Charles Hawtrey, Peter Butterworth, Bernard Bresslaw, and Kenneth Williams. In contrast to this tendency, the central characters of SCREAMING are a devious duo of mad scientists. Orlando Watt (Williams) and Valeria (Fenella Fielding, making the last of two appearances in a CARRY ON movie). Hawtrey, Sims and Bresslaw all have minor supporting roles, while major support-roles are filled out by the characters of Albert (Dale), who loses a girl to the monstrous mad scientists, and the two cops investigating the disappearance, Slobotham (Butterworth) and Sergeant Bung (Harry H. Corbett, who made no further CARRY ONs).

Americans best know Fielding for her role in 1962's THE OLD DARK HOUSE, a collaboration between the American director William Castle and Hammer Studios. This is about as close as SCREAMING gets to anything done by England's premiere horror-makers at Hammer, given that the film is all about a weird family, comprised not only of the Watts but also their pet Frankenstein Monster, "Oddbod." To be sure, Orlando may not even be alive any more, since in his first appearance Valeria is keeping him alive with electrical charges, which they both use to keep Oddbod functioning. But to defray their expenses in their expensive "old dark house," the Watts use Oddbod to abduct local girls, whom the sinister scientists change into wax statues by reversing the dead-coming-to-life currents, or something like that. The Watts then sell the statues to English department stores, and if the viewers wonder about just how remunerative this scheme could be, the script chooses not to dwell on the matter.

After Oddbod steals Albert's girlfriend Doris (Angela Douglas), Albert seeks out the local constabulary. Bung is only too happy to have a new case, to give him an excuse to escape his shrewish wife (Sims). They find one clue at the site of Doris's abduction: a very hairy severed finger. Back at the Watts manor, the duo discover that Oddbod's dropped a digit, so they infuse the hairy beast with more electricity and he grows the finger back. Later, the finger, accidentally exposed to electricity at the police lab, grows back a whole body, which makes it way to the manor and gets dubbed "Oddbod Junior."

Bung and Slobotham investigate the Watts simply because they're in the vicinity of the crime, but neither cop really suspects anything, while Bung is more than a little enamored of voluptuous Valeria. For some reason, though, the Watts think of the constables as a real threat. Albert finds Doris's waxen body in town, but can't prove that it's a transformed human being. So Orlando, who studied with both Doctor Frankenstein and Doctor Jekyll, slips Bung a Mister Hyde mickey, so that the beastly Bung will do Orlando's bidding and steal Wax Doris. Bung reverts to normal without remembering what he's done, but the Watts try to get rid of the investigators with a plot derived from Doyle's "The Speckled Band." Bung still doesn't catch on to the villains, but he gets Slobotham to masquerade as a woman to lure out the kidnappers. This all leads to an epic (for CARRY ON) battle, when Orlando sends the two Oddbods to kill off the detectives. Bung changes into Sergeant Hyde and beats down the monsters. Orlando gets undone when a bolt of lightning providentially revives a mummy he has to have around, and the mummy takes Orlando's secrets to their graves. In a final coda, the married Sergeant Bung finds a way to get around his nagging wife and to shack up with vivacious Valeria.

There are a good smattering of ribald jokes and silly slapstick here, though nothing in particular stands out. Valeria doesn't appear to be a real "vamp"-- even if she does duplicate TV-host Vampira's "mind if I smoke" schtick, so it's  not till the belated introduction of the mummy "Rubatiti" and the ersatz Edward Hyde does CARRY ON SCREAMING register as a monster mashup.

Posted by Gene Phillips at 3:46 PM