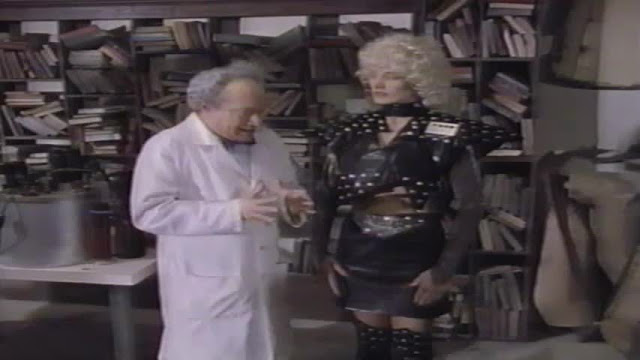 I hadn't seen ROBO C.H.I.C. since I rented the VHS, probably forty years ago. I remembered only that it was a pretty lame comedy, and didn't even know then (as I know now) that star Kathi Shower didn't even complete the film, so that her scenes had to be finished by another actress. The only time it came onto my radar again was when I heard that the film had been re-issued on DVD, but its owners, in order to avoid being sued by the people behind the ROBOCOP franchise, they re-titled the film CYBER C.H.I.C.

Then it happened that some kind (?) soul downloaded the original VHS recording onto YouTube, sans any "cyber" changes. So I gave it a look, wondering if it might fall into the "so bad it's bearable" category.

My verdict is that though ROBO C.H.I.C. is too dull and repetitive to compete with truly demented movies like TROLL 2, one might get some laughs from it if one smoked a little weed first. However, to disclose my current sentiments, my current un-favorite film is the nearly forgotten TERMINATION MAN, which I abhorred because it capsulized all the limitations of the "deal film." ROBO C.H.I.C. isn't good in any way, but at least it's not a "deal film." Rather, it's just another "film on the make."

So what's the C.H.I.C. about? There's absolutely no spoof of ROBOCOP here. Wacky inventor Sigmoid Von Colon decides to create a female robot (Shower at first, later Jennifer Daly) for no particular reason. There are a handful of nude scenes while Colon works on his new toy, but he seems mostly insensible to her charms. He doesn't give her a name, nor does he plan to show her off to the scientific community, but for some reason he does install a laser ray and a sonic boom device in her artificial chassis. He spends a huge amount of time teaching the robot girl assorted bits and pieces of human culture, but he doesn't have any thought about making her into a crimefighter until the two of them witness some thugs hassling a lady. Of her own accord, the humanoid woman beats up the lowlifes-- and then Colon dubs her Robo C.H.I.C. and decides she would make a good crime-crusher.

Conveniently enough, a wimpy mad bomber named Harry Truman Hodgkins (Burt Ward) undertakes to hold the city for ransom with strategically placed nuclear bombs, which Hodgkins alone can control with his codes. Trouble is, the police, led by a short commander with compensation issues, are total morons and they arrest him without worrying about the city's destruction. However, various criminal elements decide to kidnap Hodgkins in order to leverage his invention. Robo C.H.I.C. goes looking for the mildly irritated bomber and has an assortment of totally unconvincing fights along the way. Toward the end a gang-boss hires the services of a rival scientist (played the film's only other "name," Jack Carter) to zap the cyber-crimefighter, but eventually the heroine vanquishes the bomb threat, and everyone's happy, even the short policeman.

Despite the badness of both the fights and the jokes, this film qualifies as a combative comedy. Both of the screenwriters were also the film's directors, and neither shows the slightest sense of comic timing, even when a tiny number of the jokes have a little promise. As dumb as the POLICE ACADEMY films were, at least their makers knew what effects they were going for. Oddly, the writer-directors also toss in a number of learned-sounding references into the film, having characters discuss such esoteric matters as entropy and George Bernard Shaw, albeit ineptly. That's why I call this a "film on the make," in that its makers were willing to try any stupid strategy to score in the marketplace-- which as a rule only works once in a blue moon.

Posted by Gene Phillips at 2:47 PM