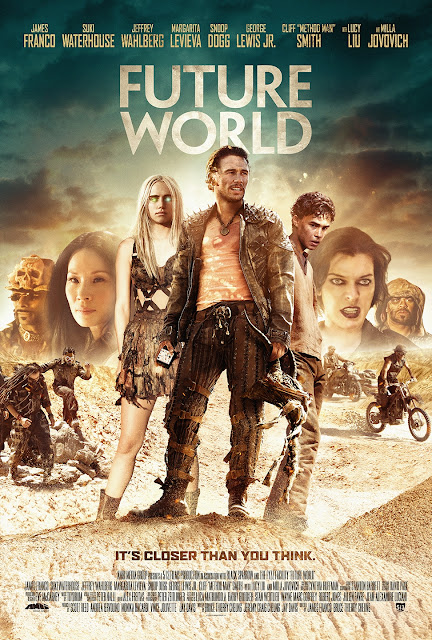 I'm astonished to see so many negative IMDB reviews of this simply average post-apocalyptic flick. Haven't any of these people seen how aggressively dull most post-apoc have been? THE SISTERHOOD?  STEEL DAWN? NEON CITY? All three of these apoco-chips mediocrities appeared much closer time-wise to George Miller's defining 1981 apoco-masterpiece, THE ROAD WARRIOR, so their shortcomings are perhaps less excusable, given that they had a great contemporary model from which to draw.

Possibly one of the film's offenses is a common one in low-budget filmmaking: the "bait and switch" in which a filmmaker constructs a story around characters played by relatively unknown actors, while advertising "names" in the cast who actually don't do much. WAR is definitely guilty of this strategy, since three of those names, Lucy Liu, Snoop Dogg, and Milla Jovovich all essay supporting roles (though Jovovich won some plaudits for playing an aggressively nutty character far removed from her RESIDENT EVIL heroine). However, at least top-billed James Franco chews a lot of scenery as the movie's villain "Warlord," in addition to co-directing the movie with Bruce Thierry Cheung, also one of the film's co-scripters.

Franco's evil guy leads a band of avaricious, motorcycle-riding raiders forever seeking new conquests, one of the main tropes of the post-apoc adventure-tale. The corollary trope is that of the raiders' potential victims, and here as in other such stories, said victims are an isolated, almost pastoral community. This desert-refuge bears the heavy-sounding name of The Oasis, though as a consequence of the low budget we don't see more than the ruling Queen (Liu), her literally-named son Prince (Jeffrey Wahlberg), and one or two retainers. Queen is deathly ill, but Prince thinks that he can find a cure in yet another rumored community, Paradise Beach.

Meanwhile, one of Warlord's illegal acquisitions is a female robot named Ash (Suki Waterhouse). Warlord programs the AI to be both his lover and his pet assassin, allowing her to execute one of his demented followers. Then, in one of the script's murkiest plot-threads, Warlord somehow finds out that Prince and his retainer have recourse to a commodity known as "bullets," and that the two men are on the way to a sex club run by "the Love Lord" (Snoop Dogg). Warlord and Ash get to the club first and make an arrangement with the pimp to betray the newbies, who are just looking for directions to Paradise Beach.

Curiously, instead of simply jumping Prince and his friend, Warlord sends Ash to pick Prince's brain first, which she does by playing kissy-face with the youth. However, the simulated love-making triggers a reaction in Ash's artificial brain. After Warlord and his raiders kill Prince's retainer, Ash rescues Prince and flees in a dune buggy. Warlord tries to fry Ash's circuits with a control zapper but it only has a limited range, though Ash's responses become somewhat confused thereafter.

Prince and Ash make it to Paradise Beach, which community is run by the capricious Drug Lord (Jovovich). She makes Prince-- who, frankly, looks like a strong wind would blow him away-- to fight a big mofo in an arena. Prince only survives because the crazy woman gives a weapon, and once he wins, he earns the reward of a cure for his mom. However, Drug Lord has decided to keep Ash for herself, and she has a small militia to back her up. Chastened, Prince starts to leave, but doubles back for Ash-- though in his absence, Ash finds another female robot and enjoys a little girl-robot-on-girl-robot action. Drug Lord, who wanted to think of Ash as her virgin daughter, gets torqued, but before she can do anything, Warlord picks that moment to invade Paradise Beach. After a brief fight between the two mad Lords, Jovovich's character dies, and Warlord takes possession of Ash and tries to overtake Prince as well. The outcome is no great surprise, though it's a minor novelty that Prince and Ash, despite their affection for one another, don't end up as a romantic twosome.

To be sure, the two leads don't earn many bones in the action department. Prince has some basic heroic traits but remains more of a poetic idealist than he is a fighter. Ash is clearly stronger than the average female, but her three fights are short and display only basic choreography. The actors, like the lines they read, strain for a soulful quality, but the writing is too mediocre to get beyond platitudes, as when Ash asks Prince to explain to her the concept of "souls." The same criticism applies to the directors' shots of the apocalyptic desolation: they're not as bad as many reviewers suggest, but they more "arty" than "artful." So while I don't expect the flick will ever earn greater acclaim down the road, I give it a modest recommendation just because it's not as dull as the majority of films in this subgenre.

Posted by Gene Phillips at 5:32 PM
Email ThisBlogThis!Share to TwitterShare to FacebookShare to Pinterest
Labels: combative adventures, the marvelous