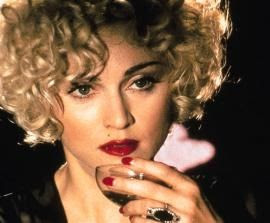 
"If deformity and disfigurement were not to be worn as stains, then what indeed was punishment?"-- Jay Maeder, DICK TRACY: THE OFFICIAL BIOGRAPHY, p. 57.


Warren Beatty's DICK TRACY, for which he wore two hats as star and director, makes an interesting study in contrasts.

For my AUM system the original Chester Gould comic strip is an important exemplar of two major tropes of the uncanny-metaphenomenal. In TRACY "outre outfits skills and weapons" usually comes down to unconventional but not-quite-marvelous weapons, sometimes used by police but more often by criminals. But the TRACY strip is far better known for the trope of "freakish flesh" in that Gould created a host of bizarre villains with all manner of peculiar deformities: Flat Top, the Brow, Little Face, the Mole, Pruneface, and even a man who apparently had no face at all: the Blank.

The Beatty film technically reproduces both tropes, though the only really weird weapon in the film is the Blank's method of dosing the hero into dreamland with sleep-gas flowers. As for the freaky villains-- well, they are there, though the script by writing-team Jim Cash and Jack Epps crams so many TRACY villains into the mix that hardly any of them score well on the strange-o-meter. The Brow, Pruneface, Littleface and others are often relegated to minor player-status, and aside from the Blank-- who merits special attention-- the only Gould villains who come off particularly well are Flat Top and Itchy, who are simply hired muscle for the chief villain, Big Boy Caprice. Caprice was TRACY's first major villain, but he like most of the early Gould-ghouls was not freakish in the least. Cash and Epps attempt to make him "fit in" by giving him a hunchback, but the film's Caprice is played by Al Pacino more for borscht-belt comedy than for grotesquerie.


In the comic strip the Blank was simply a contract killer who had a maimed, PHANTOM OF THE OPERA-style face and chose to make a new name for himself by covering that face with a cheesecloth mask. However, the film's Blank is revealed to be that femme fatale Breathless Mahoney (Madonna), a chanteuse who works for (and maybe under) Big Boy but who plans to usurp Big Boy's crime empire by setting him up for a fall. Breathless also plans to use Dick Tracy to accomplish her ends, but wants to seduce him to a life of crime as well. Ironically, in Warren Beatty's take on Chester Gould, the strongest villain is one of the "beautiful people." (It's also Madonnna's best film-performance-- which I know isn't saying much, but still.)

Jay Maeder comments that the element of physical deformity in DICK TRACY gives Chester Gould's world a note of savage cruelty, one which was often reflected in the (literally) hardnosed POV of the strip's protagonist. Beatty's TRACY reflects none of Gould's cruel rigor in either the film or the hero, though as it happens one year after TRACY Beatty would play Bugsy Malone with exactly the sort of noir nastiness one finds in the Gould Tracy. Beatty's version of the Gould-verse has clearly been influenced by the earlier success of Tim Burton's BATMAN. Hence, Beatty's Tracy is something of a tough but often bemused idealist not unlike Burton's Bruce Wayne, and Beatty's decision to emphasize brilliant pastels as a backdrop to Tracy's city, while enjoyable, is also more Burtonesque than Gould-esque. One need not even comment on Beatty enlisting Danny Elfman, hot off Burton's BATMAN, for TRACY's score.

The strongest myth-symbolism here is one seen in many allegorial Renaissance myths: the hero's struggle between Virtue and Vice. Tess Trueheart (Glenne Headley), Tracy's pretty but homespun girlfriend-- to whom he'd like to propose, but can't quite get there-- is obviously "Virtue," even if her demeanor sometimes suggests
she'd rather not become the de facto "mother figure" to "the Kid," a street kid who more or less "adopts" Tracy as his new dad. Madonna's Breathless musters all the glamors of "Vice," and though Tracy is too straight-arrow for her to manipulate him, Beatty at least shows the hero being sorely tempted.

I don't exactly dislike the Beatty TRACY. Still, I'd like to see the real world of Chester Gould come to cinema some day-- preferably with only one or two featured villains, the better to give the full effect of their freaky glory.
Posted by Gene Phillips at 2:08 PM
Email ThisBlogThis!Share to TwitterShare to FacebookShare to Pinterest
Labels: combative adventures, freakish flesh (u), outre outfits (u), the uncanny