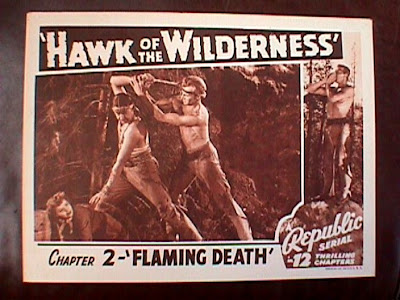 SPOILERS alerts as the ending is discussed in detail.

HAWK OF THE WILDERNESS makes an interesting contrast with the earlier serial TARZAN THE TIGER in that it shows how the trope "outre outfits skills and weapons" can be rendered in a mundane fashion so it lacks the quality of strangeness-- even though HAWK is unquestionably patterned upon the success of the ERB Tarzan books, and even has one of the film-Tarzans essaying the role of the main hero.

Aside from one short story I've never read the William L. Chester novels on which the Republic serial is based. I don't imagine there are any serious divergences. Whereas ERB's Tarzan is raised by apes, the foundling Lincoln Rand Jr. is cast from a sinking ship (on which his parents perish) and ends up on an uncharted volcanic island inhabited by an Indian tribe that's never known white civilization. The Indians raise Lincoln as one of their own, naming him "Kioga" (Herman Brix). But though Kioga becomes a mighty hunter he makes some enemies, such as the war-crazed Yellow Weasel (frequent film-villain Monte Blue).

Then an American expedition travels to the island via a hired ship, seeking to learn what happened to the Rand party. The expedition members include middle-aged Doctor Munro, his pretty young daughter Jill, a black "comedy-relief" servant named George (Fred "Snowflake" Toones) and a somewhat upper-crust fellow named Allen. Unfortunately for the expedition, the crooked sailors manning their ship get the idea that the doctor and his friends are after treasure.

Kioga befriends the (mostly) white visitors. However, most of the serial concerns his efforts to defend them both against the warmongering people of his own tribe as well as the piratical sailors. As with many Republic serials this leads to a good number of well-staged fight-scenes. Brix's lean athleticism works to good effect throughout these scenes, though in less action-packed scenes he fails to convey the charisma of a Crabbe or Weismuller.

Apart from the sheer kinetics of the battles, HAWK is a sociological myth about an encounter between whites, Indians, and a white man who dresses and acts like an Indian. (Interestingly, ERB himself mined this trope in two "white Indian" novels written prior to the success of Tarzan.) Usually the serial doesn't dwell at all on the culture clash, though there's one amusing exception. Kioga, talking to one of his Indian friends, is perturbed to find himself attracted to Jill, in spite of the fact that she doesn't look strong enough to do the average women's chores. Clearly Kioga's Caucasian "nature" triumphs over the Indian tribe's "nurturing," so that he rejects their standards of attractiveness.

Toones' black servant "George" deserves a little attention. The best thing one can say about George is that he doesn't evince too many anti-black stereotypes, aside from the usual default of being scared to muck about with burial grounds, spooks and the like. George isn't particularly bright, but that in itself doesn't have to denote a racial characteristic; most comic servants are funny for being dim. However, in one chapter George, captured by hostile Indians, almost gets a chance to enjoy heroic action. Despite having had his hands bound behind his back, George seizes a chance to escape and head-butts not just one but two of his captors into dreamland. He then loses his chance at glory by mistaking a totem pole for a third adversary, and so knocks himself out.

The best sequence takes place as Kioga and his allies seek to repair a small plane to escape the island, even as they're being pursued by both bad Indians and greedy white men *and* while the local volcano is about to blow its stack. When Doctor Munro announces that the plane can't carry the whole expedition, plus Kioga, his two friends and his dog, the spirit of cooperation becomes strained. Jill staunchly determines that they will all leave together, but Allen-- hitherto a minor character-- suddenly decides to get rid of the dead weight. He makes an attempt to "accidentally" kill one of the Indians, and when Kioga catches him, he rants against "dirty Indians" even though Kioga is his own race. In the exciting wrapup both Allen and one of Kioga's allies are killed by the vengeful Yellow Weasel, whom Kioga then executes. Following this drastic reduction of the fugitives' party, the plane successfully takes off with all the heroes, and the volcano goes off, implicitly killing off all the villainous Indians and white men.

Though Kioga is a strong hero, he has none of Tarzan's unique skills, and even his going around without a shirt carries no strong associations beyond the notion that "that's how Indians dressed." In contrast to the exotic societies portrayed in both TARZAN THE TIGER and WILD WOMEN, the Indian tribe seen here is a pretty conventional one, and thus never realizes its potential for "strangeness" through the trope of exoticism.
Posted by Gene Phillips at 3:49 PM
Email ThisBlogThis!Share to TwitterShare to FacebookShare to Pinterest
Labels: combative adventures, exotic lands and customs (n), outre outfits (n), the naturalistic