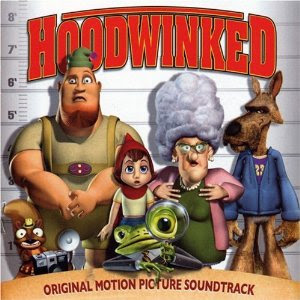 
Here's the simplest way to describe the appeal of the original HOODWINKED, First creators Cory and Todd Edwards took the basic structure of the typical 1990s Disney cartoon-feature, with its focus on a young protagonist given to singing plaintive "I want" songs at the opening. Then the creators overlaid this basic structure with a variety of narrative devices on loan from Quentin Tarantino-- fragmented narrative, heavy pop-culture referentiality, and an eclectic musical score. This Quentinizing of a "tired old tale" took a few more chances than other recent fairy-tale spoofs, such as SHREK, and did well at the 2005 box-office.

Now the classic folktale of "Little Red Riding Hood" was a favorite target for spoofery in the Golden Age of Theater Animation. Still, though the first HOODWINKED is as strong as the best Disneys in terms of verbal jokes and sight-gags, its real appeal was, like the Disneys, its ability to put across a simple but elemental emotional conflict alongside all the japery. Scholars like Bettleheim have speculated that the original folktale was meant to serve as an admonition young girls received from their mothers about the dangers of strange wolves in the woods. The Edwardses don't aim to get quite that profound, but I doubt it's coincidence that the central conflict of HOODWINKED is between young Red, the film's preteen protagonist, and Granny Puckett. But the Edwardses invert the folktale's lesson-giving structure. Instead of Little Red learning the perils, both to her and her granny, of messing with wolves, this Red, who yearns for a more fulfilling life than delivering goodies for the Puckett Bakery, finds out that her granny is secretly living the "extreme" life Red years for, and keeps it secret from Red for no clear reason. A probable model for this conflict may be that of Ariel and Triton in LITTLE MERMAID, where the young heroine again chafes under the heavy hand of an adult perceptor, only to bond later against a more deep-dyed villain.

The real villain of HOODWINKED, incidentally, is not handled in the Disney manner, but is hidden in plain sight along the lines of an animated Keyzer Soze. Because the film keeps the villain (SPOILERS-- the bunny did it) out of the main narrative, the script is free to focus on more hijinks with the various heroes. The Wolf (a crusading reporter instead of a hungry/lusty assailant) and his squirrel-buddy Twitchy are the "B-team" to Red and Granny's "A-team," but the two teams don't really interact in any meaningful way, which doesn't hurt HOODWINKED but does present a problem for the sequel. Other characters, such as Kirk, "the Woodsman", Japheth the Goat and Nicky Flippers (a fun in-joke derived from cinematic sleuth Nick Charles), are really just there to funnel jokes, and vary from annoying to admirable.

Having come to a rousing conclusion (though strangely, lacking a concluding song as good as the ones given Red and Japheth), HOODWINKED ends with a very unsubtle set-up for a sequel, implying that Nicky is going to corral most of these lone wolves (excepting Kirk the Woodsman-- wise choice to leave him out) and get them to work with him in a secret organization that makes sure all fairytales have happy endings. And it's this problematic idea that HOODWINKED TOO, scripted by pretty much the same people but with a new director, has to build from. 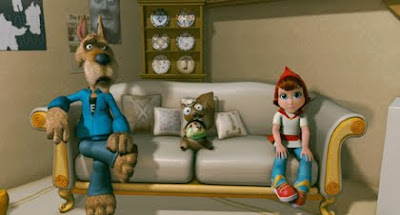 The problem inherent in this idea is that while being fairy-tale enforcement agents sounds great for the A-team, the script has to dance around the fact that it makes little sense for Wolf and Twitchy. What we have in TOO is a pale rendering of your basic "buddy action-comedy." It's not infrequent in such stories to have some super-competent enforcement-agent obliged to join forces with a character who's at best a noob and at worst a total screwup. But, even granting a lot of leeway to the motivations of cartoon animals, Wolf and Twitchy simply aren't believeable doing the crimefighting thing of their own conscious volition, rather than being, as in the first film, forced into it by circumstance.

This is particularly tough to sell because, the conflict between Red and Granny having been settled, for TOO the Edwardses opt to generate a bland "conflict" between the super-tough but unsubtle Red and the tricky but maladroit Wolf. The scenes of them carping at each other for imagined offenses are painfully dull, usually only relieved by some comic business by Twitchy.

The villains are weaker, too. Whereas the first film set up the revelation of "the last bunny you'd expect," the sequel gives away the game about halfway through the narrative. This might not be a bad thing if the Real Villains had any presence, but neither they nor their Bungling Assistant Who Later Turns Good are anything to write home about. The bad guys even turn colossal at the end, as if to signal that the writers were again cribbing from LITTLE MERMAID-- but this time, in a bad way. Fortunately, the filmmakers give us a guest appearance of the Boingo Bunny, though the bad bunny's character naturally puts the lesser fiends to shame.

There are a lot of good jokes and sight-gags (though no songs) in TOO, so it's not entirely a waste of time. And it's at least funnier than any of the SHREK sequels. But TOO won't be making very many lists of "movies where the sequels were better than the originals."
Posted by Gene Phillips at 2:56 PM
Email ThisBlogThis!Share to TwitterShare to FacebookShare to Pinterest
Labels: combative comedies, the marvelous