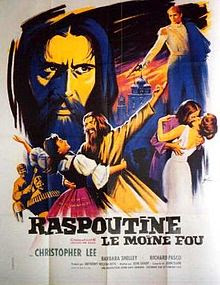 The best line in this Hammer take on history's mesmeric madman appears early in the film, when wild country-monk Rasputin justifies his immoral activities to one of his churchly superiors:

When I go to confession I don't offer God small sins, petty squabbles, jealousies... I offer him sins worth forgiving!

I would have loved to have seen a Rasputin who fulfilled this narcissistic credo, one who honestly believed in the religiosity of drinking and whoring because it gave God sins weighty enough to be worth forgiving. However, this line seems to exist only to allow the viewer to get over the conundrum as to how this Russian priest could be so thoroughly devoted to acts of ungodliness, which the film proceeds to chronicle in lavish detail. There's no intention to "psychologize" Rasputin or any other character, which may be fortunate, but I still had the feeling that all the characters in MAD MONK were merely going through the paces given them by director Don Sharp and Anthony Hinds. (Later Hinds' script for 1970's TASTE THE BLOOD OF DRACULA would also dally with Sadean sinfulness, with better results.)

Prior to this review, only my analysis of 1941's KING OF THE ZOMBIES dealt with a case where my category "enthralling hypnotism and stage magic" applied to a film where a hypnotist or magician was the film's *focal presence,* the fictional presence around which the story revolves. Hypnotism is merely a minor effect in 1957's HOLD THAT HYPNOTIST and 1985's JOURNEY OF THE DOOMED, and a hypnotist is the major opponent for Charlie Chan in 1944's BLACK MAGIC. But RASPUTIN is closer than ZOMBIES to the classical "evil hypnotist" story immortalized by Svengali et al. Indeed, RASPUTIN is so much about the mad monk who held the fate of Czarist Russia in his hands that Christopher Lee's take on the character is really the only facet of the film that truly shines. Lee takes full advantage of his own gaunt features by bulging out his eyes when he's either performing his miraculous healing-cures or putting pathetic victims like Barbara Shelley under his aegis. It's a strong performance, but the other characters are so blandly scripted that they don't seem worthy to be in the same film with Lee's Rasputin, much less that some of them actually manage to kill him in the end. Regardless of how the film was conceived, RASPUTIN feels like a one-actor show, in which everyone else is just there to make Lee look good.

In another type of film, one could picture Rasputin's healing arts to verge into the category of "the marvelous." Here, though the film does not suggest how Rasputin's cures work (much less how he executes them, given his domineering attitude), but the default explanation seems to be that the monk's hypnotic abilities simply "jump-start" his subjects into healing themselves. Something similar may underlie how Rasputin throws off the initial efforts of his enemies to kill him with poison and stabbings, though he does prove merely mortal in the end. One Hammer producer commented that if Hammer had faithfully represented the entirety of those efforts-- that is, showing Rasputin survive death as many times as he purportedly did in real life-- the effect then would have been inescapeably comic. In this case, less was definitely more.

I should note that as with the phenomenon of hypnosis itself, the historical figure of Rasputin is one that can bivalent: "uncanny" in one work, and merely "atypical" in another work. I haven't rescreened 1932's RASPUTIN AND THE EMPRESS in many years, but though it too ends with Rasputin's assassins striving with might and main to execute their target, I tend to think the 1932 film would be merely "atypical" in its phenomenality.
Posted by Gene Phillips at 12:06 PM
Email ThisBlogThis!Share to TwitterShare to FacebookShare to Pinterest
Labels: enthralling hypnotism and illusionism (u), the uncanny