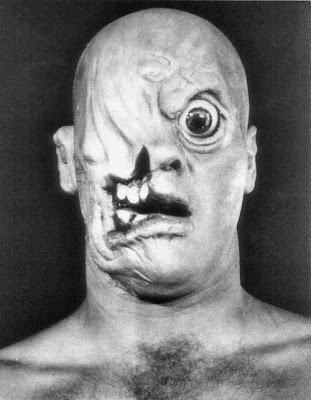 
I've never been a big fan of most Bert I. Gordon films, with the exception of the peculiar "not-really-for-kids" kiddie-flick THE BOY AND THE PIRATES from 1960 (which I hope to review here some time soon). Next to those, the Colossal Man flicks and TORMENTED are above-average cheese, but a lot of the others aren't all that thrilling, even though I grew up watching them on local SF-movie reruns.

But though I hadn't seen it for a while, I rather liked THE CYCLOPS, which was the first film on which director Gordon didn't share writing-credits with anyone else. In his recent VIDEOSCOPE interview he stated that he wrote it very quickly, but though it's clearly derivative of other stories it has a tighter feel than many of his later outings.

Bereaved Susan Winter, whose test-pilot boyfriend went missing in a mountainous area of Mexico, gets things rolling with a plot-motif clearly borrowed from the cinematic adaptations of KING SOLOMON'S MINES, in which a woman goes hunting in deepest Africa (or some analogue thereof) for a missing fiancee. In fact, at one point, the film's de facto villain, Lon Chaney Jr.'s Marty Melville, calls their trek a "safari." This Melville isn't really interested in hunting for lost husbands; the "white whale" he wants is a uranium find, which happens to be in the same vicinity that Susan's fiancee Bruce went missing. Along for the ride are Lee, a pilot flying the group to their location for mercenary motives, and Russ, an old friend of Bruce. Russ is also in love with Susan and hopes to find evidence of Bruce's death so that Russ can propose to her.

Unfortunately for all of their mixed motivations, the Mexican valley in which they land is replete with a mysterious radiation-- apparently coming from the buried uranium-- which causes animals to grow to ginormous size. This development adds a good ticking-clock element to the story: if the searchers don't leave the valley in due time, they too may become "freak-ified." The searchers encounter a giant lizard, a giant bird, a giant snake, and inevitably, the cyclops of the title, a giant man with one eye. As shown in the picture above, the makeup suggests a ruined visage suggests that at one time he had two eyes, and that one was destroyed. For a little while after Susan's encounter with the giant-- who, though savage, is gentleman enough to wear a big loincloth-- Susan simply thinks he's a local who got unfortunately mutated. Russ, however, figures out early on that it's good old Bruce. Gordon's script never explains the cyclops' mutilated features or his inability to communicate, though possibly Gordon meant to blame the plane-crash for both. In any event, for Russ one-eyed Bruce is the return of a rival who's better off dead. Susan's reaction to the Cyclops' identity is a little harder to suss out, but the dominant feeling is that she too doesn't see any future for a giant man with a face only a mixmaster could (and possibly did) love. Gordon later countered this relative feminine indifference with the ending of 1958's WAR OF THE COLOSSAL BEAST, where the giant's wife pleads with him not to kill himself.

At one point prior to the encounter with the Cyclops, Russ wonders how Bruce could have survived out in the wild for months even if he did survive the plane-crash. The unstated answer is that as the Cyclops Bruce became just as predacious as the other giant animals, presumably feeding off other wildlife. Though his mental capacity is severely diminished, he's still canny enough to trap the foursome in his cave, blocking the entrance with a huge rock, a clear tip of the hat to the Polyphemus episode in Homer's ODYSSEY. But even though the Cyclops sees to recall Susan very vaguely, Gordon's script still situates him as more beast than man, particularly since his original intention in capturing the humans, prior to his recognizing Susan, can only be to eat them. This too is another Homeric borrowing-- as is the Cyclops' fate, for he dies after heroic Russ hurls a flaming homemade javelin into the creature's eye. Analyses of THE ODYSSEY take the Cyclops' blinding to represent the triumph of man's culture over brute nature. I wouldn't say that Bert Gordon ventures into waters quite that deep. However, it is significant that his Cyclops never really does seem fully human. And though he swipes from King Kong's bag of tricks-- wrestling with a giant animal, the snake, even as Kong did, the big monkey outdoes the one-eyed giant in terms of humanity.

Still, I think the metaphor holds, albeit loosely, which is I assign it the "cosmological" function from Joseph Campbell, which deals with mythic recapitulations of the natural world, the physical world beyond the boundaries of human civilization. Gordon's CYCLOPS is one of many radiation-transformations throughout 1950's SF-cinema, but it's one of the few in which the radiation is entirely the product of nature, and no way attributable to the sins of humankind.

Even though the plot is nothing new, or even new-seeming, Gordon keeps a good level of tension thanks to Chaney's Melville. Long before any giant critters show up, it's clear that Melville is out for himself and will almost certainly be The Weakest Link: the guy who constantly screws up or otherwise endangers his supposed allies. During the plane ride to the valley, pilot Lee has to listen to Melville brag about what a smooth, smart operator he is. Moments later, when the plane hits turbulence, Melville panics, slugs Lee and apparently thinks he's going to land the plane himself. Later, once Melville finds the uranium cache, he tries to talk Lee into cutting out the others by flying away and registering a claim on the valuable mineral. To be sure, Melville's still a stock bad egg. But Chaney succeeds in making him more pitiful than pitiable. A viewer can thoroughly enjoys despising such a character; one who has, if anything, less ability to see the world around him than the Cyclops does.
Posted by Gene Phillips at 1:41 PM
Email ThisBlogThis!Share to TwitterShare to FacebookShare to Pinterest
Labels: the marvelous